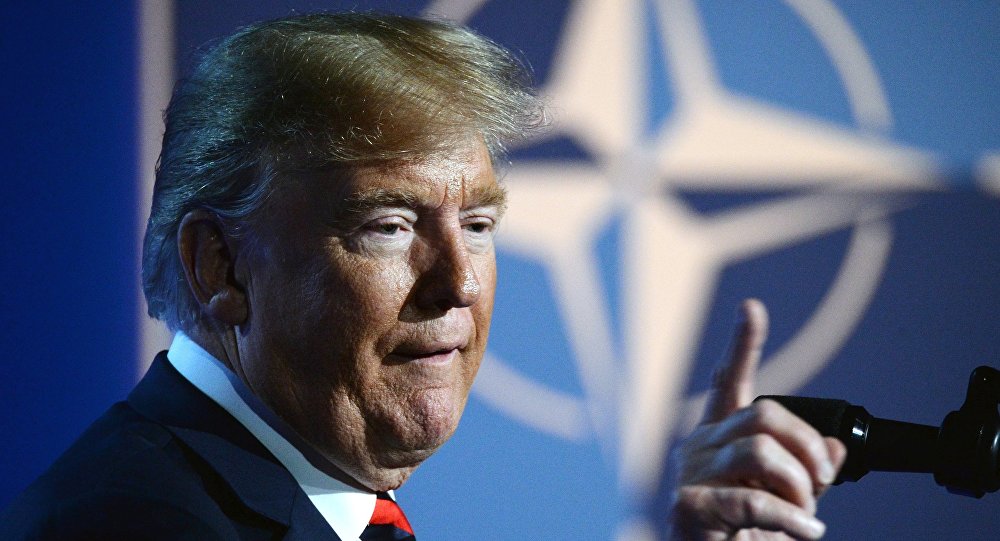 US President Donald Trump leaves on Monday for a NATO summit in London expecting to participate in the alliance’s meeting, while the British Prime Minister Boris Johnson has reportedly been urging him to stay away from the British election campaign coming up later in December.

The NATO meeting is scripted to be a "celebratory leaders' meeting," according to a White House talking point ahead of President Trump's trip, however, there are some indicators that the meeting might not go as smoothly as planned.

The US president is expected to take credit for a stronger NATO and celebrate the fact that the Europeans are spending more on their defence – one of Trump’s key points in his criticism of Europe. A White House official summarized that narrative for Axios as "increased defence spending by European allies of $130b since 2016 ... plus a decrease in the US share of NATO’s budget, plus increased high readiness forces."

Three senior officials, however, told Axios that the US President has been deeply annoyed by Macron, who recently told The Economist that "what we are currently experiencing is the brain death of NATO" and that the United States under Trump's leadership appears to be "turning its back on us." Another official said Macron's comments might cause Trump to speak more positively about the alliance to contradict the French president’s negativity.

The Europeans, meanwhile, have shared their worries widely ahead of the meeting, fearing the unpredictability of the US president. "All I'm hearing is a great anxiety about what Trump might do or say," said Ivo Daalder, who served as US ambassador to NATO from 2009 to 2013.

"The last two NATO meetings didn't go well," Daalder told Axios. "In 2017, [Trump] refused to reaffirm Article 5, and in 2018, he threatened to walk away from NATO if Europeans didn't spend more on defence."

Article 5 guarantees that NATO allies will defend one another against an armed attack. NATO means nothing without this promise. After the backlash from the US’ European partners, Trump explicitly endorsed NATO's mutual defence clause.

NATO allies have two crucial internal debates to discuss for this summit: Turkey’s decision to buy the Russian S-400 anti-aircraft missile system and what NATO sees as China’s growing threat to the alliance.

China “is actively seeking a great presence and more influence across the globe, including in NATO’s area of responsibility,” according to a senior US administration official. The China talks will reportedly be centred around whether to allow Huawei to operate 5G networks and the growing alignment between Beijing and central and eastern European countries.

The US banned Huawei's telecommunications equipment from American soil and banned its firms from selling sensitive technologies to the Chinese tech giant in May 2019. Washington accused Huawei of assisting Beijing's alleged espionage efforts and called on all countries to ban the giant's equipment from being used in national 5G networks. Both China and Huawei denied Washington's accusations, with the latter vowing to sue the US for its discriminatory move. Several of the US’ European partners had also banned Huawei’s 5G equipment, with France as a notable exception, as it explicitly decided to let the Chinese telecommunication giant participate in the initial rollout.

Another point of concern is Turkey and its decision to buy the Russian S-400 missile system. The US has repeatedly objected to Ankara’s purchase of the S-400s, saying that the missile systems are incompatible with NATO security standards and may compromise the operations of its fifth-generation F-35 fighter jets, allegations that Turkey vehemently rejects. Moscow and Ankara signed a loan agreement for the supply of the S-400s to Turkey in September 2017. Russia completed the first shipment of S-400 components to Turkey in late July 2019, with Erdogan stating that that the S-400s will be fully operational in the country by April 2020.

Not a Word on Elections

Meanwhile, the US President was reportedly put under pressure from British Prime Minister Boris Johnson to resist the temptation to wade into the British election campaign coming up later in December. A senior administration official said that Trump “is absolutely cognizant of not, again, wading into other country’s elections.” Johnson, who faces the December 12 general elections, reportedly urged his US counterpart to avoid any involvement with the elections, especially while talking to reporters.

As a presidential candidate in 2016 and then as president since early 2017, Trump has shown no restraint in showing support for Britain’s exit from the European Union and critiquing the politicians involved in the country’s long-running Brexit debate, urging the UK to focus on a trade deal with the US. In October this year, Trump also waded into the election by saying opposition Labour Party leader Jeremy Corbyn would be “so bad” for Britain and that Johnson should agree on a pact with Brexit Party leader Nigel Farage.

'Article 5, Not F-35': French Minister Lashes Out at US for Forcing NATO Members to Buy Its Weapon