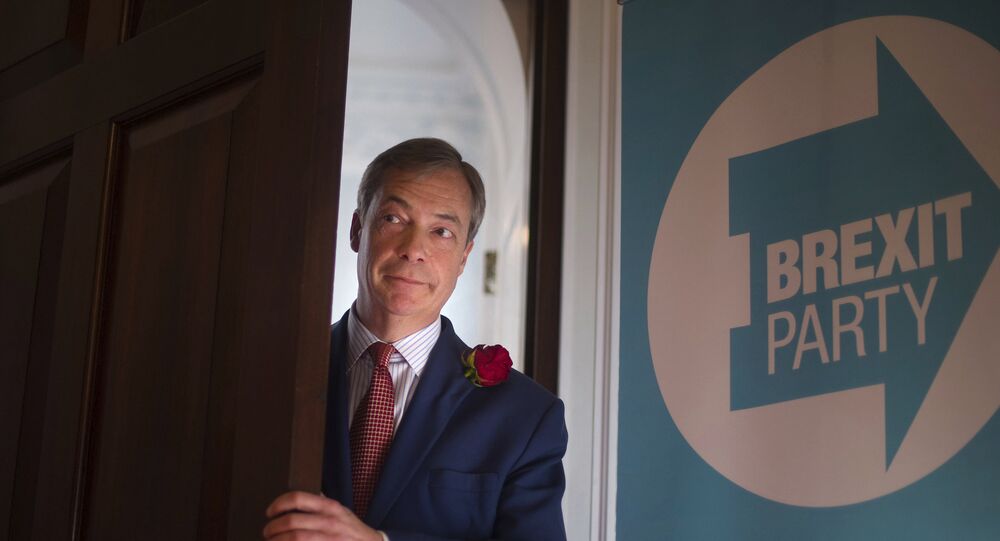 The “talks” supposedly kicked off right around the time one Brexit Party candidate jumped ship to join the Tories in order to partake in the 12 December vote, while another one directly asked Nigel Farage not to split the right-of-centre forces by nominating candidates from his party.

Per a report by The Telegraph, citing an unnamed friend of Nigel Farage, the Brexit Party chief is currently holding secret negotiations with individual Eurosceptic Tory candidates about withdrawing opponents from the general election.

"We are having those conversations", said one.

While on a campaign visit to the Midlands, Farage told the edition he was “open” to such deals, hinting though that any cooperation would cost the sides an agreement from the Tory candidate not to support Johnson’s deal in Westminster.

Prior to the reported development, a Tory candidate in Portsmouth, Donna Jones, begged Farage not to contest her aspirations and put up a candidate against her “if he really wants Brexit to happen".

"If the Brexit Party don’t stand a candidate, then the chances of me winning go up dramatically. It’s a three-way marginal, so not having another right-of-centre party standing will help me", said Donna Jones.

Farage responded noting the request was “just the start” and arguing there will surely be “loads” of these. “What is Donna going to do?” he queried, before continuing to contemplate on Donna’s remarks:

"Is she going to vote for an EU treaty that keeps us trapped for years, ties our foreign policy, doesn't get our fishing back and actually aims at a trade deal based on regulatory alignment, which my friend Donald Trump says [means] we can't do a trade deal with the USA".

"Donna, tell me why? If Donna is offering something fresh and new I am all ears", Farage, who he said had doubts if he could "trust" Conservatives after the way they have failed to deliver on the results of the 2016 referendum, rounded off in a veiled dig.

Meanwhile, the Brexit Party’s candidate in Dundee East, Calum Walker, has expressed an intention to represent Farage’s party in the area, despite concerns that the Brexit Party standing against the Conservatives would “split the Brexit vote.”

On Tuesday, The Telegraph reported that over 20 Brexit Party hopefuls had turned their back on their party citing Farage's criticism of Mr Johnson's deal, while others reportedly did so for personal reasons or due to the hostility they face when starting their campaigns.

Boris Johnson is expected to lay out his Brexit deal again to a new batch of MPs in Parliament if he is still in his post after the 12 December general vote, which was agreed upon in Westminster last week after three other attempts in recent months.

Johnson will need the support of all his MPs to deliver on his long-standing campaign promise of a divorce from the EU since the support of the DUP, which gave his party a majority of seats in Parliament, is a thing of the past. He said a new parliament will ratify the current Brexit bill after the elections, and would allow the UK to finalise the landmark constitutional change.

Boris Has Negotiated Great Deal, Nigel Farage Would Have Been Even Better - British Author