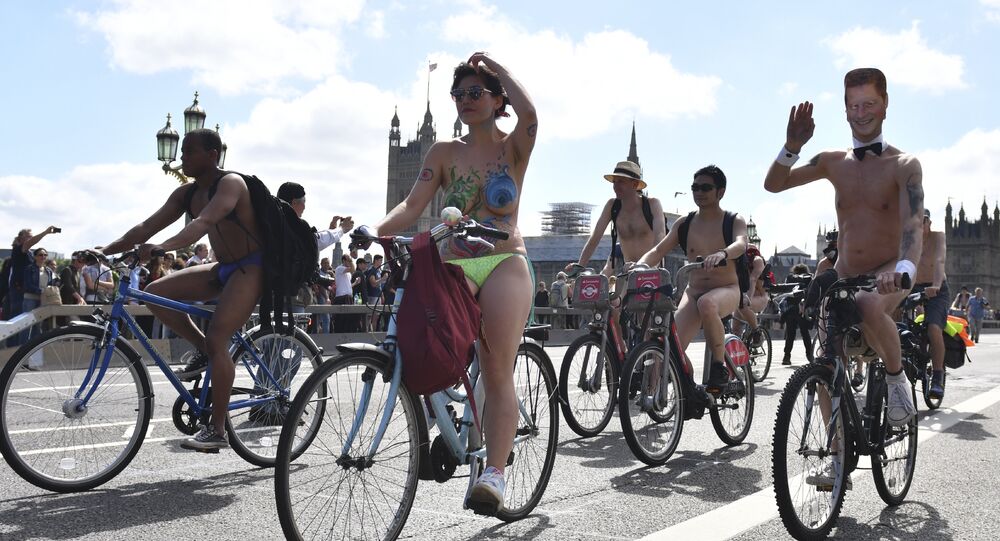 As Bare as You Dare: Naked Bike Ride Brings Together Thousands in UK (PHOTOS)

Some of the campaigners had messages written on their bodies, such as "Less cars, more bikes" or "We are here to embarrass our children," and wore fancy X-rated costumes.

Thousands of cyclists have pedalled through British cities in the buff over the weekend in a bid to raise awareness about the joys of cycling, promote environmental causes and celebrate body positivity.

Of course I try and cross the road when the naked bike ride is passing pic.twitter.com/2IzcqRFoOG

The cheeky rides are part of an international campaign called the World Naked Nike Ride. Events of this movement are scheduled on different dates, but are usually clustered in March for the Southern Hemisphere and in June for the Northern Hemisphere.

Two kinds of spectators at the World Naked Bike ride tonight…those who knew it was coming & those who didn’t. pic.twitter.com/FaEk7TAVbF

This weekend, the campaign brought together over 3,000 people in the UK, including Brighton, Cardiff, Edinburgh, London and Manchester, while Toronto, Mexico City and Cork also joined in.

The naked truth was on display at the  #WorldNakedBikeRide yesterday.

The organisers of the Manchester event said they wanted to "protest against fossil-fuelled climate change" and the ubiquity of cars, as well as celebrate "bikes, bodies and low-impact living".

Looked out my window and saw this. This is why I love Brighton #Brighton #WNBR@BtnNakedBike pic.twitter.com/KRivg3BPRp

"Even when we are fully clothed we are naked to the danger of motorists on the road. We want to live in a world not blighted by traffic pollution, where the car is seen as the go-to form of transport. Most of all, we are here to celebrate people, who come in all shapes and sizes and are beautiful as they are," they said.

The cyclists were encouraged to go "as bare as you dare", and while some were wearing swimsuits and pants, most paraded completely naked or in bizarre NSFW dresses.