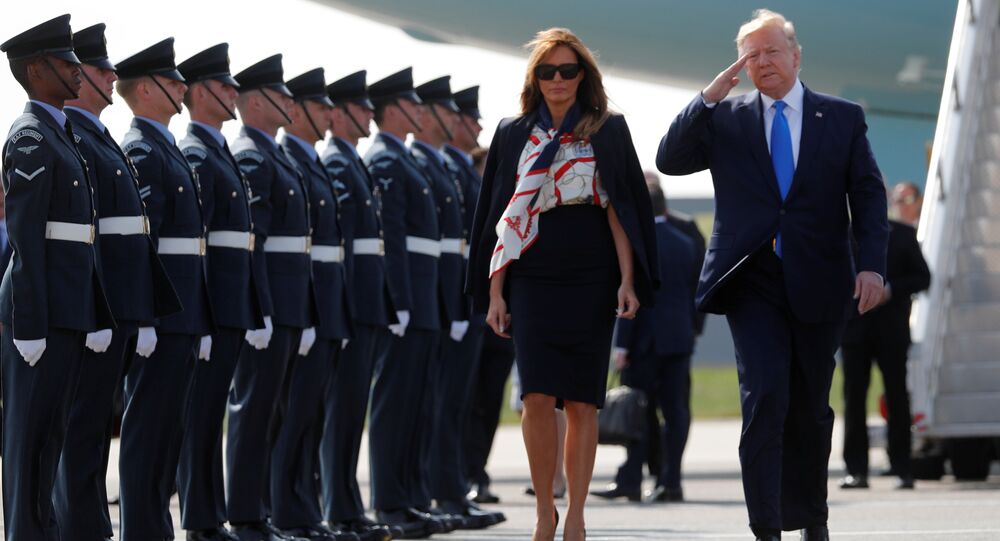 Earlier, a White House staffer directed the US Navy to hide the USS John S. McCain missile destroyer from US President Donald Trump's sight during his visit to Japan.

The group of protesters 'Led By Donkeys' have set up a projection of a giant red baseball cap with the USS John S. McCain missile destroyer onto Madame Tussaud's in London during US President Donald Trump's three-day state visit to the UK.

Led by Donkeys became widely known earlier this year due to their campaign consisting of billboards containing past statements by pro-Brexit politicians which appeared to undermine their political position.

Hey @realDonaldTrump, we read the story about the sailors on a US warship being ordered to hide from you because you’re triggered by the name on their hats. So we turned Madame Tussaud's into a giant USS John McCain baseball cap. Welcome to London! pic.twitter.com/KuynOwupFm

This was only one of several installations that activists have set up across various places in London. Another installation projected Trump's approval rating compared with his predecessor, Barack Obama, among UK citizens.

Hi @realDonaldTrump. Just so you know, you’re wildly unpopular here in Britain. SAD! People REALLY don’t like you (though they love @BarackObama). Hope you like seeing your FAILING approval numbers projected onto the Tower of London. #TrumpUKvisit pic.twitter.com/oT332Fd6fE

The controversy surrounding the USS McCain missile destroyer was first revealed by The Wall Street Journal, which reported that the US Navy was ordered to hide the warship from Trump's sight during his visit to Japan. While Trump and the acting Pentagon chief said they did not know about that, Acting White House Chief of Staff Mick Mulvaney said that "someone on the advance team" was probably responsible for the request to hide the ship named after late Arizona Senator John McCain, his father and grandfather.

Trump and First Lady Melania arrived in the United Kingdom for a three-day state visit during which the US President is expected to underscore the importance of the bilateral relationship between both countries amid concerns over Brexit and the UK Prime Minister Theresa May's recent resignation announcement. During Trump's working visit to the United Kingdom last July, an estimated quarter of a million people marched in London to voice their opposition to Trump.