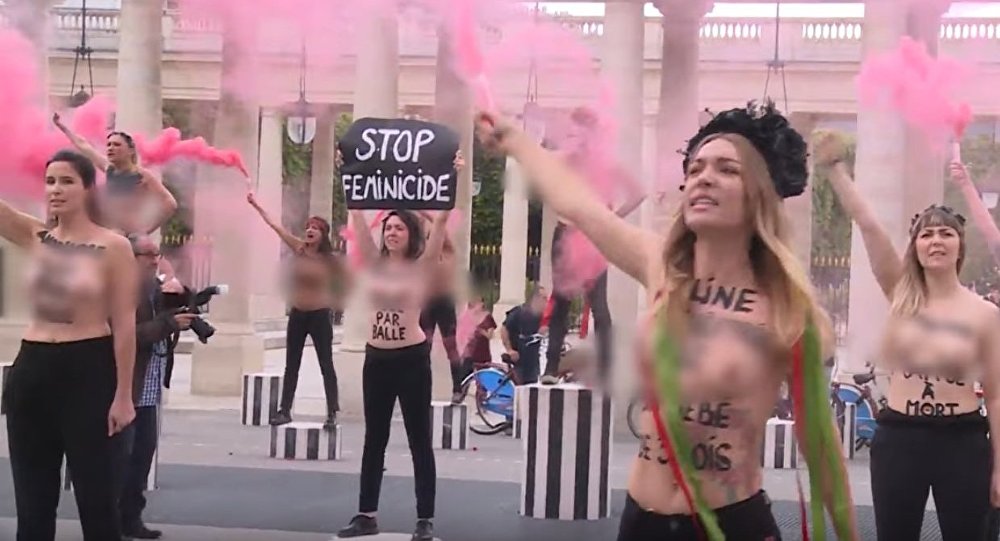 Femen activists, known for staging predominantly topless protests across the globe, have once again organised a nude action in Paris - shortly after two members of the feminist movement were fined on charges of indecent behaviour for attacking the motorcade of US President Donald Trump in November 2018 during his visit to the French capital.

About sixty activists from the infamous Femen movement briefly exposed their breasts near the Palais-Royal, opposite the Louvre museum in Paris, on Thursday morning to "pay homage" to some 60 women "murdered" in France since the beginning of the year and denounce what they called the "indifference of the government", AFP reported.

With the names of women and circumstances of their killings on their bare chests, the topless protesters lit several pink smoke bombs under the watchful eye of tourists at 11:00 am (local time) sharp, chanting slogans, such as "To murdered women, indifferent homeland!" and "Stop feminicide", according to the news agency.

According to the latest government statistics cited by AFP, nearly 220,000 women were the victims of domestic violence in 2017 and 130 were killed by their spouses or ex-partners.

This week, two Femen activists were sentenced to a conditional fine of 1,000 euros for attacking the motorcade of US President Donald Trump in November 2018 as he was heading to a Paris event commemorating the 100th anniversary of the end of World War I.