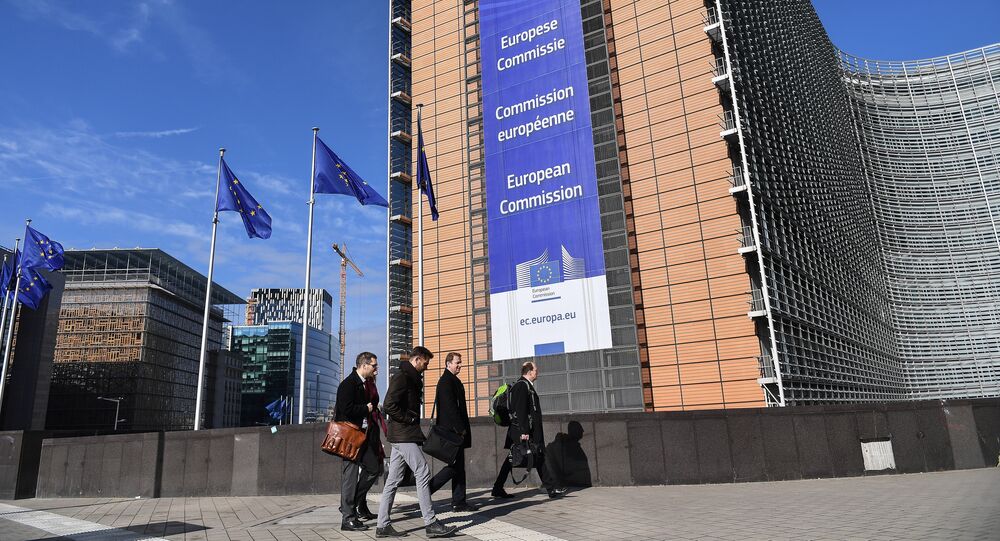 BRUSSELS (Sputnik) - The European Union does not have time to let the dust settle after the bloc-wide elections as it will have to deal with the tricky nomination for the job of the European Commission president, a process where numerous political beliefs and programs are likely to clash and egos could get bruised easily.

© REUTERS / Francois Lenoir
EU Elections: 'Voters Seek New Direction, New Perspectives From Governments' - Brexit Advisor
European Council President Donald Tusk spoke out against the process last year. Tusk stressed that the commission president had to be proposed by the EU leaders and approved by the European Parliament. On Tuesday evening, after the results of the EU elections came in, the European Council president reiterated that there could be "no automatism" in the process.

In addition to the rift between the council and the parliament, there may be some disagreements within the hemicycle.

The current president of the commission, Jean-Claude Juncker, campaigned as the lead candidate for the European People's Party (EPP) in 2014. However, the EPP saw its numbers slip in the latest election. It is still the largest party, but with 179 seats in a 751-seat parliament, instead of 218.

Even if it joins forces with the second largest group, the Progressive Alliance of Socialists and Democrats (S&D), their combined numbers will still not be enough for the majority in the parliament. Meanwhile, their potential coalition partners may have a different view on the lead candidate process.

Guy Verhofstadt, the leader of the Alliance of Liberals and Democrats for Europe (ALDE), has criticized the so-called Spitzenkandidat procedure. The liberals put forward several names instead of just one.

"The [European People's Party group] EPP is pushing hard for the Spitzenkandidaten-system, but unfortunately they killed the legitimacy when they voted against the transnational lists. A Spitzen-candidate that you cannot vote for in the whole of Europe is simply not serious," Verhofstadt said on Twitter on Tuesday.

Arrangements of the Past

The EPP and the S&D "cannot continue with their cosy little arrangements," Dominique Bilde, a French member of the European Parliament, told Sputnik.

"The EPP and the Socialists of the S&D have lost big in these elections. They cannot continue with their cosy little arrangements; once a Socialist, once a Social Christian to head parliament and the same for the Commission," Bilde, who belongs to the French National Rally party, said.

Bilde believes that the two major parties will likely turn to the Greens or ALDE to fill some influential positions.

"There are several liberal candidates bickering between each other: the Competition Commissioner Margrethe Vestager, or the ex-Prime Minister of Belgium Guy Verhofstadt are the most often mentioned," Bilde said.

Alternatively, a relative "outsider" Michel Barnier, who — as the EU chief negotiator for Brexit — "managed to keep Europe united on the negotiation," could be up for the top job "if it is too difficult for the main parties to select among their ‘official’ spitzenkandaten," the French politician said.

Frenchman Barnier is an EPP member, but their lead candidate is the leader of the party's political group in the parliament, a German Manfred Weber.

© REUTERS / Wolfgang Rattay
Euroskeptics' EU Parl't Gains to Serve as Foundation for a Strong Faction - AfD
Weber's candidature sets the stage for yet another confrontation: he is supported by Germany's Chancellor Angela Merkel. However, French President Emmanuel Macron's Renaissance movement has been aligned with ALDE, who reject the spitzenkandidat process, for the election. Speaking in the aftermath of the election, Macron mentioned Vestager, Barnier, and First Vice-President of the commission Frans Timmermans as potential leaders, but not Weber.

Macron's Renaissance movement together with ALDE secured 105 seats, which puts them in the third place and makes them likely kingmakers.

The president of the European Commission is usually in the spotlight, so the right candidate would have to be charismatic and diplomatic, Michel Liegeois, a professor in political sciences at the UCLouvain university in Belgium suggested.

"The role of the president of the European Commission is the most visible in the European institutions, so it is important — and all will agree on that — that the person chosen, has charisma, is at least bilingual with English and has an acute sense of diplomacy, to navigate between the heads of states, governments and parties, to ‘keep the church in the middle of the village’ without antagonizing anybody," Liegeois told Sputnik.

© AFP 2021 / PATRICK HERTZOG
Czech Party Chairman on EU Elections: We All Respect the Results
However, EU leaders may be less than thrilled with someone who might outshine them, Yasmine Dehaene, the lead candidate for the Belgian People's Party at the EU elections, argued.

"Do you really believe that the ego of the heads of state of countries such as France or Germany, Macron and Merkel or others, would accept to have a ‘super-president’ of the Commission, that would overshadow their own little persons? Never! You will never have a Tony Blair or a Nicolas Sarkozy in such a position. Not that they refuse, but the heads of the member states don’t want the head of the European executive [branch] to be even slightly independent from them," Dehaene said.

Consequently, Dehaene believes that Verhofstadt and Timmermans are unlikely to be picked for president exactly because of their charisma.

Time For Women To Lead?

Liegeois pointed out that many were insisting on a woman for the top job. Tusk spoke in favor of gender balance in the commission on Tuesday, while Macron suggested that the top four EU jobs should be filled by two men and two women.

"There has never been a woman at this high function; it is about time. There is of course also the coalition to be formed. The most credible would be a center-right coalition of the two largest parties, the ‘losers’ plus the liberals of the ALDE or else a center-left coalition with the two 'losers' and the Greens. In both these configurations, there is a prominent lady to fulfill the role: the German Ska Keller for the Greens and Margrethe Vestager, the Danish Competition Commissioner for the Liberals," Liegeois said.

Macron Party's 2nd Spot in EU Vote 'Personal' Loss for President — OfficialDamien Lempereur, the spokesperson for a French party, Debout La France!, believes that Vestager could win the top job if the two largest parties got an alliance with ALDE rather than the Greens, whose program on climate change would be too "extreme" for the largest parties, demanding "a real tsunami of taxation."

"So the main parties will probably be much more ‘classical’ and make a deal with the friends of Macron, the Liberals… It is Macron who is the 'heaviest decider,' Germany defending a certain loser, Manfred Weber," Lempereur said.

Macron knows Vestager well, the two "have debated in public and met many times" and "appreciate each other," Lempereur suggested. The two have had their differences — Vestager reviewed and rejected the proposed merger of French Alstom and German Siemens, which did not sit well with either Paris or Berlin. On the other hand, both are strong believers in Europe, both have taken shots at digital multinationals.

Vestager, as a commissioner, has an advantage of experience in the EU executive branch, unlike Germany-backed Weber. Merkel, however, has warned against dismissing any candidate because they only have experience in the parliament.

According to Merkel, the EU leaders have agreed to try to propose a candidate for the leadership of the Commission by the EU summit in late June.