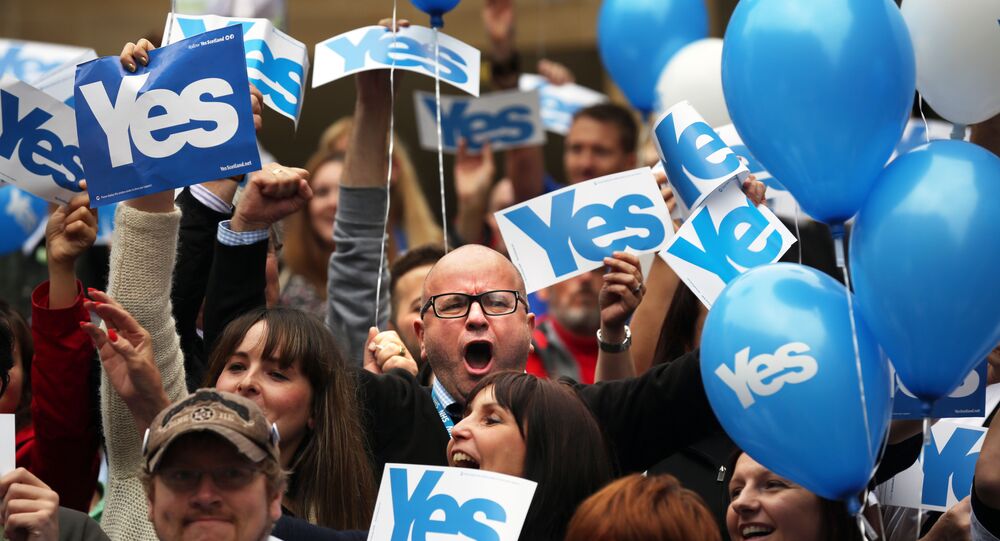 Substance is much more important than spin. That truism is as applicable to politics as it is to life. Block out the white noise of the various mealy mouthed spin doctors and highly paid gum bumpers from all sides and the truth is the 2019 European Elections told us nothing we didn’t already know. The UK as an institution is dead.

It is a deeply divided Kingdom. Scotland is a different country and the sooner it seizes its independence the better for everyone who rejects the reactionary British nationalism and regressive xenophobia which pollutes large parts of England.

Farage by name, Fraudage by nature. Millionaire Nigel Farage fraudulently promotes himself as an anti-Establishment politician when his public schoolboy credentials and city trader training mark him out as a quintessential figure of the privileged Establishment.

© AFP 2020 / Andy Buchanan
Journo: Success Possible If Scotland Independence Referendum Took Place Tomorrow
He is rolling in cash lavished upon him by multi-millionaires keen to support him in his quest to privatise public services, particularly our NHS, and his kid gloves treatment and promotion by the mainstream media over many years gave him a platform to utilise his silky salesman skills.

He is a man, however, of little substance but massive spin. He is trying to claim the EU election victory as something remarkable for a party formed only weeks before the election.

He hailed it an historic achievement for a new party yet even a cursory glance at the facts tells a different story. Many people seem to have forgotten that the party he formed and led for many years actually won the last EU election in the UK with 27% of the votes cast in 2014. There was then a Brexit referendum two years later in which he figured large and 17.4 million people (51.9% of the votes cast) voted to leave the EU.

After three years of farce and fiasco leading to failure to honour the 2016 Brexit Referendum result, a referendum which attracted a 72.2% turnout from the 46.5 million potential electorate, you would have had to be a Dodo to expect anything but an angry reaction from those who voted Leave in 2016.

Yet the 31.6% of the votes the Brexit Party won was less than a 5% increase on what his UKIP party won 5 years ago. UKIP's vote collapsed to a miserable 3.3%. Many people who voted for the Farage led Brexit Party would have voted UKIP in 2014. The less than 5% increase on the 2014 total is made up of voters angry at the failure of Parliament to carry out the democratic will of the people as expressed in the 2016 Referendum.

So it is fraudulent to argue that the Brexit Party is either a new Party or new at all. It has no policies, manifesto, leadership structure, constitution or transparent funding but it does have one of the highest profile political figures in Britain as its spokesman. And for someone who made an incredulous 34th appearance on the BBC Flagship political show, Question Time, on the 9th of May to portray himself as a "new force" or voice in politics underlines just how fraudulent he is.

© AFP 2020 / Andy Buchanan
People Gather in Glasgow For Scotland Independence March (VIDEO)
Sure the result of the EU election for the Tories and Labour was a kick in the political balls and deeply embarrassing but when the dust settles you will find that the explicitly Remain parties actually polled more votes than the explicitly Leave parties so Fraudage trying to claim an historic victory is actually empty rhetoric.

His Brexit Party and UKIP added together amounted to 34.9% of the vote but the votes of the Lib Dems, Greens, SNP and Plaid Cymru in Wales added up to 40.4% of the votes cast.

So this EU election was far from a ringing endorsement of Fraudage and his ‘walk away without a deal' grand standing. The Tory 9.1 % of the vote was humiliating while Labour's 14.1% was almost as bad. But the fact remains significantly more people voted explicitly against Brexit than for Brexit last Thursday across the UK.

Of course an EU election with a total turnout less than the number who voted Brexit in 2016 in no way negates the democratic will of the people as expressed in that referendum but the claims of historic victory by Fraudage are as desolate as his drawer marked principles and his claim to be anti-Establishment (17.4 million vote Leave in 2017 while only 17.2 million voted at all last Thursday).

The unionist BBC in Scotland could hardly contain their disdain as they were compelled to report on an extraordinary success for Scotland's principal independence party, the SNP.

© AFP 2020 / Andy Buchanan
SNP Must Stop Trying to Save Britain and Instead Resolve to Dissolve Britain
The shallow, shrill and integrity free leader of the Scottish Conservatives, Ruth Davidson, sought to turn the whole EU election in Scotland into an anti-IndyRef2 plebiscite. Her EU election leaflet, broadcast and regular interviews where a consistent concentration on the SNP's declared intention of holding IndyRef2 and how a vote for them would in effect be a vote for a wasteful, unwanted and divisive second referendum. Wow!

The SNP vote soared by 200,000 compared to 2014, an impressive 8.8% increase in vote share. The Tory vote slumped by 5.6% while their pro-unionist Labour party chums suffered an embarrassing 16.6% collapse in their vote compared to 5 years ago.

The collapse of the Labour vote in Scotland was significantly worse than the collapse in England and Wales (11.3% compared to 14.6% in Scotland) and leaves their feeble and ineffective leader, Richard Leonard, in a perilously weak position. One wonders how much longer he will now last.

The BBC EU Map of the UK is a sight to behold. While the Brexit colour dominates swathes of England and Wales Scotland is resplendent in SNP yellow. Every single local authority on the Scottish mainland was won by SNP. Even for anti-EU supporters of independence like me it is an encouraging sight and one which has emboldened First Minister Nicola Sturgeon to clarify and harden her commitment to hold IndyRef2 before the 2021 Scottish Parliament elections.

Speaking in the relatively small but independent republic of Ireland last night, 27th May, Nicola added flesh to the bones of the IndyRef2 commitment:

"There will be another Scottish independence referendum and I will make a prediction today that Scotland will vote for independence and we will become an independent country just like Ireland, and the strong relationship between our two countries now will become even stronger soon.

"I want to see Scotland having the choice of independence within this term of the Scottish Parliament, which ends in May 2021, so towards the latter half of next year would be when I think is the right time for that choice".

© AP Photo / PA / Danny Lawson
UK Brexit Party Leading in EU Parliamentary Elections - Preliminary Results
So September or October next year will see Scotland presented with the chance to claim her freedom and status as a normal independent nation committed to social justice and tackling the grotesque inequalities of wealth and power which breed so much poverty and waste of human talent.

Hand on heart I believe tactically it would be better to hold it this October prior to the 31st October exit from the EU while the unionists are so deeply divided and weakened but I and the grassroots Indy movement will put our shoulder to the wheel and campaign for a YES vote this time no matter when it is called.