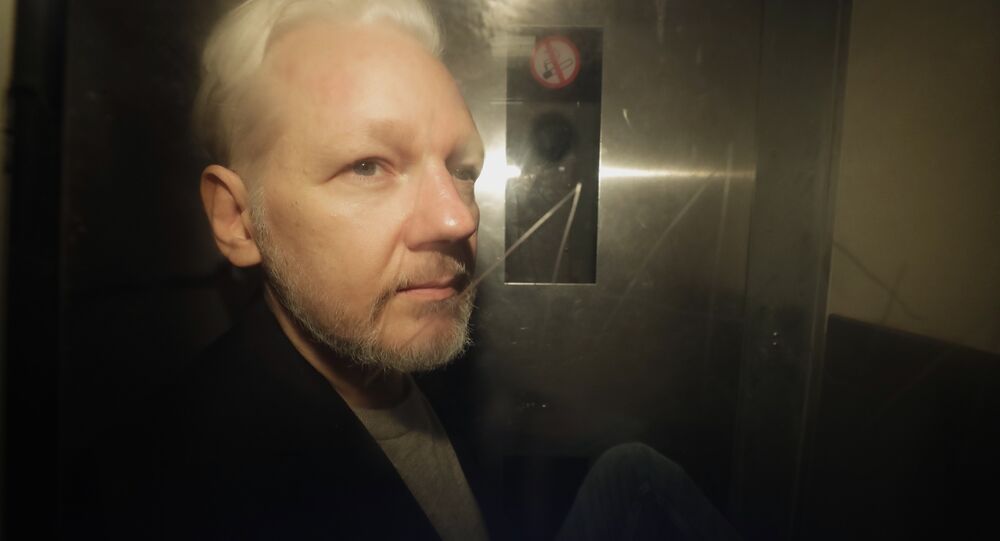 The WikiLeaks founder has sent letters to several independent journalists. In one letter, he calls on people of the world to stand in his defence, because he has been stripped of all means to prepare his defence.

WikiLeaks founder Julian Assange, now imprisoned in Belmarsh prison in the UK, has sent letters to several independent journalists, one of whom shared the letter with Bristol-based news website The Canary.

In the letter, which is said to have been handwritten on purpose, Assange complains he's been cut off from "all ability to prepare to defend" himself, including having no laptop, no Internet connection and even no library access.

According to the letter, he has to wait for "weeks" to arrange for a phone call. The "catch-22" is that everyone who calls Assange gets their details checked; besides, the authorities record and screen all calls except for his conversations with lawyers.

As US seeks to crush media freedom, we all need to read Assange's letter from prison https://t.co/McSp9CYlV2 by @TheCanaryUK pic.twitter.com/5Epk2u0vKm

​"The other side? A superpower that has been preparing for 9 years, with hundreds of people and untold millions spent on the case," Assange writes, followed by a call for people outside to stand in his defence.

"I am defenceless and am counting on you and others of good character to save my life," the letter says. "I am unbroken, albeit literally surrounded by murderers, but, the days where I could read and speak and organize to defend myself, my ideas, and my people are over until I am free! Everyone else must take my place."

Haxorjoe
MSM Needs to Protect Assange, Not Only Themselves, From Espionage Act
Assange directly accuses "regrettable elements" in the US government who "hate the truth" of trying to cheat their way into organizing his extradition and death sentence in the US, before reminding readers that he has been nominated for the Nobel Peace Prize seven times for his journalism work.

"Truth, ultimately, is all we have," Assange concludes.

Assange currently is serving a 50 week term for skipping bail — a sentence a UN working group called "disproportionate retribution for a minor violation." The United States has indicted Assange on 17 new charges under the Espionage Act, which might result in about 175 years in prison.

Currently, the UK is faced with two conflicting extradition requests — from the US and from Sweden, where Assange is still being accused of sexual assault.

On 3rd June, the UK court will conduct a hearing on Assange's extradition to Sweden. The US extradition request will be reviewed on 12 June, according to a Gizmodo report.