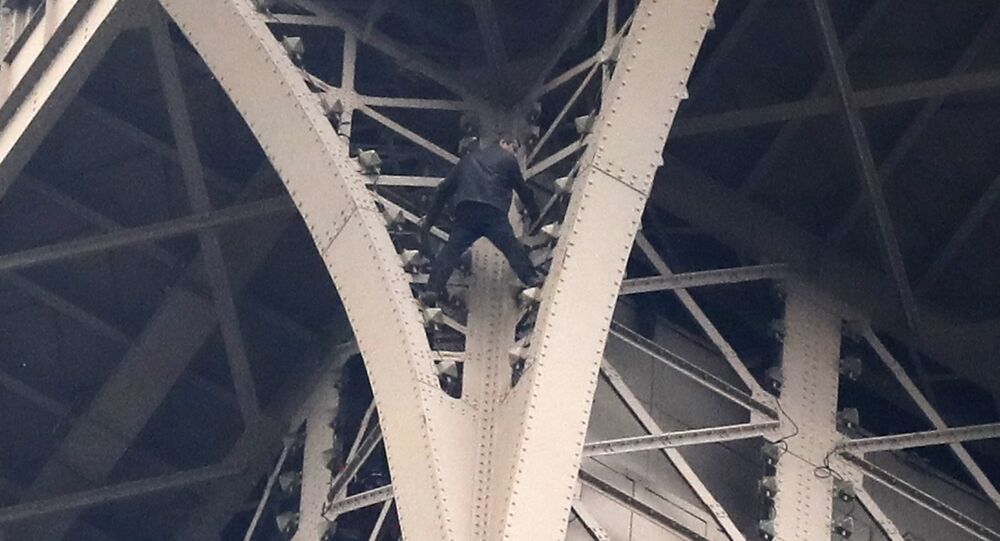 On Monday, the Eiffel Tower, which is considered to be the French capital's most significant symbol, was evacuated after a man was seen climbing it.

The Europe 1 radio channel reported on Tuesday that a man who climbed the Eiffel Tower the day before was actually "Russian with suicidal tendencies", and is believed to be seeking asylum in France. The man reportedly spoke English at first, but then turned to Russian.

© AP Photo / Michel Euler
Police Nab Climber Earlier Spotted Scaling Eiffel Tower - Report
French authorities and the Russian Foreign Ministry have yet to confirm the claim; however, the Russian Embassy in France said that it had received no information regarding the detained man.

The man managed to climb over all fences and reach a height of 300 metres without any special equipment. After several hours of negotiations, police managed to persuade him to leave the tower and hand himself over.

The climber, whose name remains unknown, was not arrested after descending the tower, although he will have to go before a court.

The incident occurred during a celebration of the 130th anniversary of the French architectural symbol. It was built by order of the government for the Paris World Exhibition in 1889 and was designed by engineer Gustave Eiffel.

The tower was fully closed in 2017 when a young man attempted to commit suicide. Police, however, managed to discourage him from doing so and were able to him down from the tower.

Love is in the Air: Eiffel Tower Staff Ask Visitors Not to Have Sex on Top

Dino Sale: $2 Million Allosaurus to Be Auctioned Off at Eiffel Tower (VIDEO)