UK royal Prince William will join the Friday service to honour the UK's nuclear-armed submarines and crew to recognise the Royal Navy's commitment to "effective peacekeeping", rather than as a celebration, according to Westminster Abbey as cited by AP.

Protestors including several politicians, members of the British royalty and military chiefs gathered in front of Westminster Abbey on Friday to commemorate fifty years of Britain's nuclear deterrent. 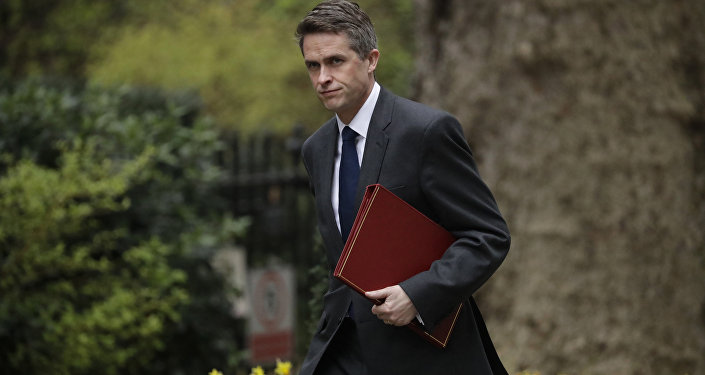 © AP Photo / Matt Dunham
Gavin Williamson Toured Top-Secret Nuclear Sub 2 Days Before Sacking − Reports
Operation Relentless, which was launched 50 years ago, has required a UK sub armed with nuclear missiles to patrol the country at all times since April 1969, as part of the UK's continuous at-sea deterrent (CASD).

Newly-appointed defence secretary Penny Mordaunt said in a Friday statement that Operation Relentless was the "longest military operation we have ever undertaken and continues right this minute deep under the sea," Ms. Mordaunt said.

"We pay tribute to those incredible crews, their supportive families, the Royal Navy and the thousands of industry experts who will continue to sustain this truly national endeavour for many years to come."

But peace activists from the Campaign for Nuclear Disarmament plan to stage a "die-in" in front of the abbey, with Kate Hudson, secretary-general for the CND stating that the event was "morally repugnant".

"Despite huge opposition from clergy and the public, it looks like this morally repugnant service will go ahead," Ms. Hudson said in a statement. "We will be there to say its never okay to celebrate weapons that would kill millions if they were used."

"The Abbey should listen to these members of the clergy and listen as well to the thousands of members of the public who have written to the Dean to make clear what ought to be obvious, that nuclear weapons should not be celebrated."

Over 200 clergy from across the UK have signed a Christian CND statement urging the Dean of Westminster Abbey to reconsider the service, instead engaging with the group to "eliminate nuclear weapons across the world". Rethinking Security, a network of organisations, academics and activists on reforming international security, published an open letter on Thursday urging Ms. Mordaunt and international development secretary Rory Stewart to reassess its renewal of the UK's Trident nuclear deterrent programme.