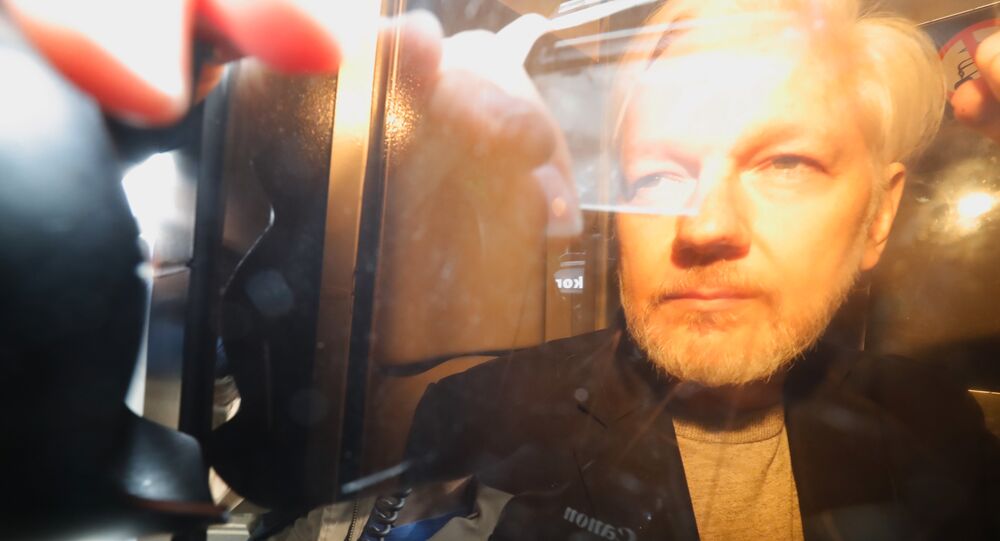 Julian Assange, the co-founder of the whistleblowing website Wikileaks, will be sentenced at 9:30 GMT on Wednesday at Southwark Crown Court over breaching bail conditions, according to WikiLeaks.

WikiLeaks founder Julian Assange appeared in a London court on Wednesday where he will be finally sentenced for breaching the conditions of his bail following seven years of residence in the Ecuadorian Embassy in London amid fears of extradition to the United States.

The whistle-blower appeared before Southwark Crown Court wearing a black jacket over a grey sweatshirt. While in court, he confirmed his name and took a sip of water from a plastic cup, Reuters reported.

© AFP 2021 / STEFFI LOOS
Ecuador Spied on Julian Assange, Lawyer of WikiLeaks' Founder Says
This comes after last month, the Metropolitan Police Service (MPS) arrested Assange, dragging him out of the Ecuadorian Embassy in London. The arrest came on charges of Assange's violating his bail conditions and at the behest of US authorities.

Shortly after this move, WikiLeaks said the United States wanted to build an espionage case against Assange. An espionage charge can carry a maximum sentence of death penalty or imprisonment for life. However, the US Department of Justice said it was seeking Assange's extradition over "conspiracy to commit computer intrusion for agreeing to break a password to a classified US government computer."

Assange became a prominent figure in the news after WikiLeaks released a massive trove of classified documents, including some that exposed abuses of power and war crimes committed by US troops in Afghanistan and Iraq, and at the Guantanamo Bay detention camp.