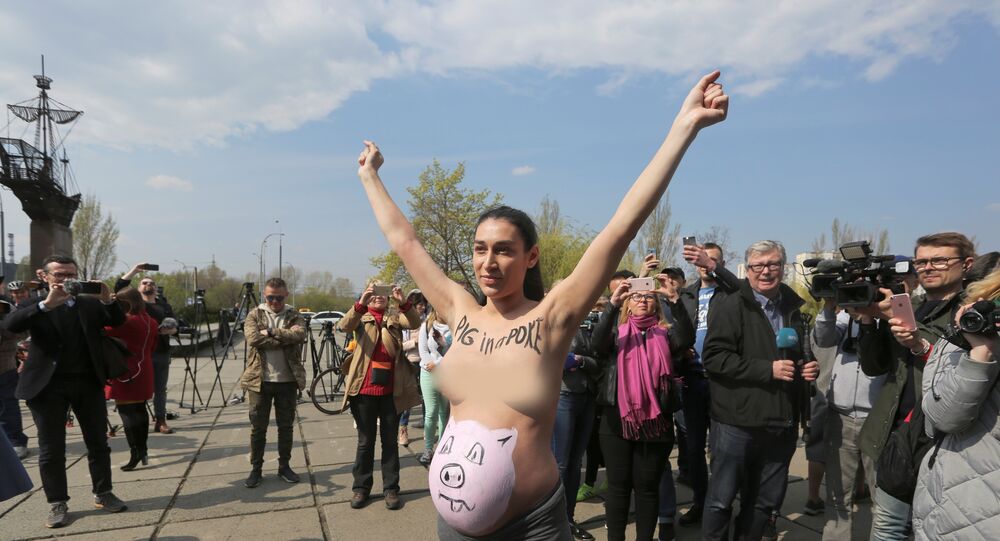 The Eastern European country is holding a runoff in its presidential election today. A topless pregnant woman decided to demonstrate at a polling station where Comedian Volodymyr Zelenskiy, who is running against incumbent President Petro Poroshenko, went to vote.

A topless pregnant woman, claiming to be an activist of the international group FEMEN, marched to the voting station where candidate Volodymyr Zelensgkiy cast his ballot in the second round of Ukraine’s presidential election. She chanted “Stop raping Ukraine!”

According to the Russian outlet RBC, the woman, who called herself Julia, said “We do not know who Zelenskiy is. He is a pig in a poke”. She had the same statement written on her chest, as well as a pig painted on her belly.

​“I think that our people have lost their hope. I’m voting for nobody, and came here to share my idea. I came like this because it is noticeable. Otherwise, no one would notice”, she told the outlet, claiming that she does not support Zelenskiy’s rival, incumbent President Petro Poroshenko, either.

However, the head of the Ukrainian wing of FEMEN later told RBC that the woman belongs to a “separatist group” of their movement that is “working for Poroshenko”.

The first round of the Ukrainian presidential election was held on 31 March and resulted in none of the candidates receiving the majority needed to win the race; however, Zelenskiy secured more votes than his rivals.