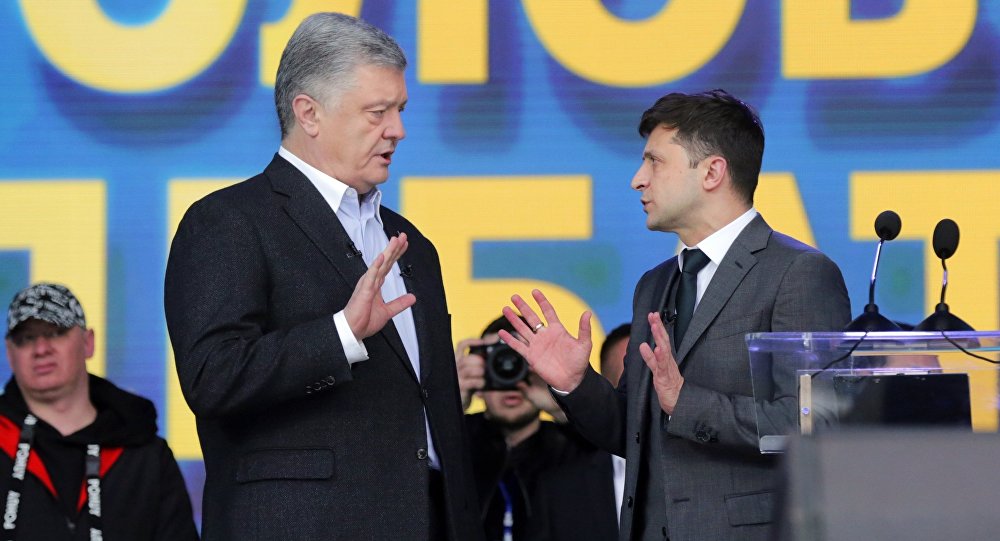 "I am not your opponent, I am your verdict," Zelenskiy said during debates with Poroshenko at Kiev's Olimpiysky stadium.

Zelenskiy said Friday he would do everything possible to end the "war" in Donbas.

“And about the war: we will do everything to end it,” Zelenskiy said during debates with his opponent, current president Petr Poroshenko.

© Sputnik / Stringer
Putin Open to Provocation-Free Dialogue With Ukraine's Zelenskiy - Kremlin
Zelenskiy further noted that Ukraine "is heading to Europe," and vowed to defend the European choice of Ukrainians in the event of his victory in the second round of presidential elections.

"Ukraine has chosen the path to Europe — and this is the most important thing. Ukraine paid a high price during Maidan… Ukraine is going to Europe, and I, if people decide so, will defend the European choice of Ukraine," Zelenskiy said during debates with his opponent, incumbent leader Petro Poroshenko at Kiev's Olimpiyskiy stadium.

The presidential candidate also jumped at the chance to play the Russian card, saying that he had never talked to Russian President Vladimir Putin, unlike his opponent in the presidential race, incumbent Ukrainian head of state Petro Poroshenko.

"I have never talked to Putin in my life, while I know how many times you have had phone conversations with Putin," Zelenskiy told Poroshenko at their debate in Kiev, held ahead of their upcoming runoff.

Zelensky added that he had not visited Russia since 2014.

Poroshenko, in his turn, said that he would accept any choice of the Ukrainian people after the second round of presidential elections.

The first round of the Ukrainian presidential election was held on March 31 and resulted in none of the candidates gaining the majority needed to win the race. The runoff is scheduled for Sunday.