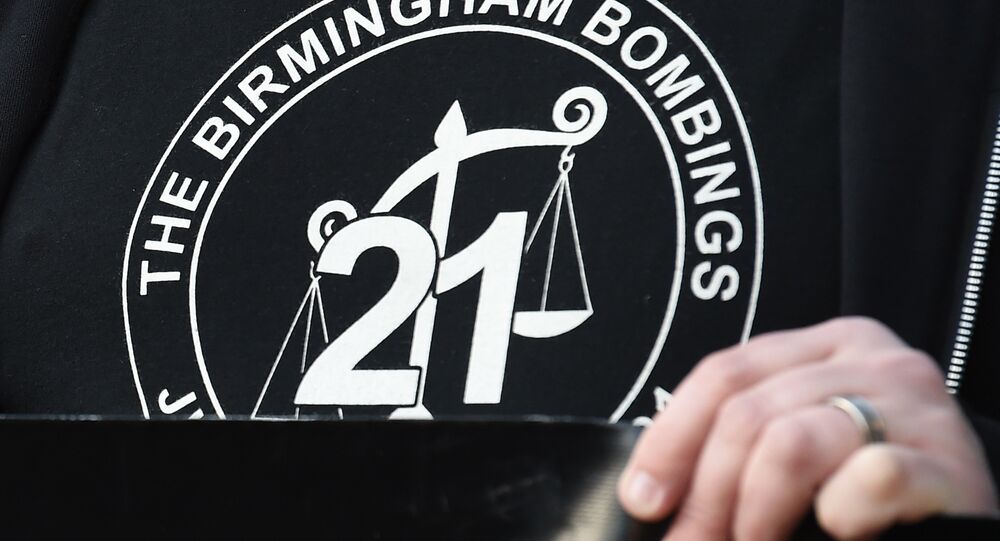 On 21 November 1974 two bombs planted by the Provisional IRA at pubs in Birmingham exploded, killing 21 people and injuring another 220. Six men were wrongly convicted for murder and spent 16 years in prison.

An inquest jury has decided West Midlands Police should not be held responsible for the way they handled bomb warnings from the IRA.

The jury, sitting at Birmingham Civil Justice Centre, returned a verdict on Friday, 5 April, that the IRA's warning phone call was inadequate and the police did not have time to evacuate the Mulberry Bush or Tavern in the Town pubs, where the bombs went off.

A member of the IRA using the recognised codeword "Double X" called the Birmingham Post and Evening Mail — two local newspapers — at 8.11pm, only seven minutes before the first bomb went off.

The warning was immediately passed on to the police but the caller did not say which pubs the bomb was in and that night there were only 15 police officers in the city centre because 135 had been sent to cover the funeral procession of James McDade, an IRA member who had been killed while planting a bomb in Coventry a week before.

​Six men — Paddy Hill, Gerry Hunter, Johnny Walker, Hugh Callaghan, Richard McIlkenny and Billy Power — were convicted of the bombing in 1975 and spent 16 years in jail before they were finally cleared by the Court of Appeal in March 1991.

The so-called Birmingham Six was one of the worst miscarriages of justice in British history.

During the month-long inquest a convicted IRA bomber gave evidence by video link and named the four men he says were responsible for the "atrocity".

​The bomber, known only as Witness O, named the bombers as Seamus McLoughlin, Mick Murray, Michael Hayes and James Gavin.

He said he had been given permission to reveal the names by the head of the IRA in Dublin.

Former IRA intelligence chief Kieran Conway had previously said the attacks were "accidental" and had not been sanctioned by the IRA leadership.

The Coroner, Sir Peter Thornton QC, said the bombings were "etched in the history" of Birmingham, Britain's second biggest city.

Sir Peter said the "dreadful events will never be forgotten" and he paid tribute to the emergency services who spent hours trawling through the rubble to find survivors and dead bodies.

"We just hope, in light of the jury's unequivocal finding that the IRA murdered 21 innocent people, that the West Midlands Police will now redouble their efforts in terms of those bombers who may still be alive to bring them to justice," said Leslie Thomas QC, a lawyer representing the families of 10 victims.

The IRA spent 25 years fighting for a united Ireland but eventually signed the Good Friday Agreement and laid down its weapons.

In recent months there have been fears that remnants of the group might consider taking up arms as the danger of a hard border rises due to a no deal Brexit.