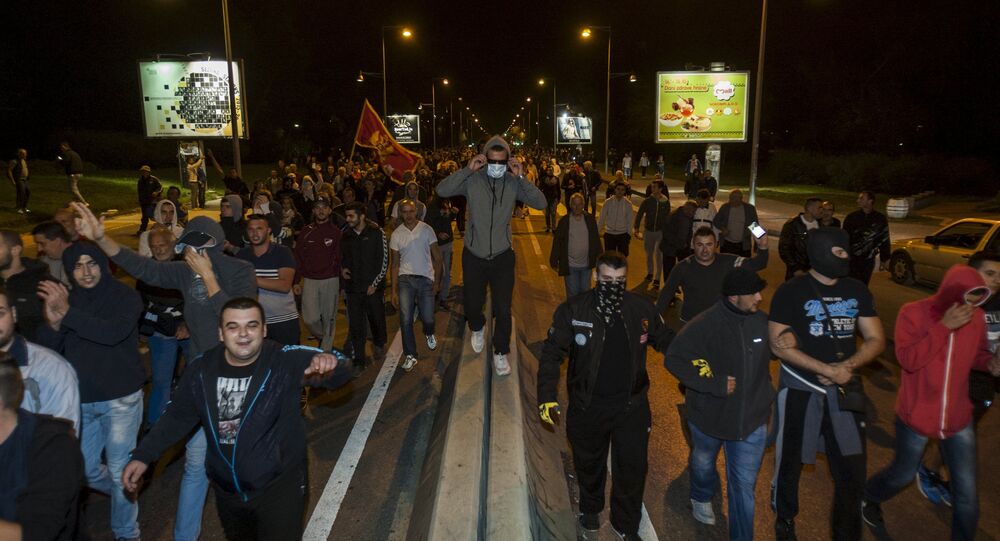 BELGRADE (Sputnik) - The organizers of mass anti-government protests in the Montenegrin capital of Podgorica signed an agreement early on Sunday demanding the resignation of President Milo Dukanovic and the cabinet, as well as the creation of a civil unity government led by a non-partisan prime minister.

"We are angered but apart from that we see that the citizens of [Montenegro] have hope and faith. We will not allow anyone to divide us […] Therefore we are telling them from the Independence square that there is only one division — the criminals and free and honest citizens of Montenegro", Demir Hodzic, one of the participants, said during the demonstration that was live-streamed on the civil movement's Facebook page.

The leaders of Montenegro's opposition parties, such as Democratic Front, Democrats, Social Democratic Party, Socialist People's Party, Demos, signed the so-called "Agreement on the Future" during the demonstration.

© AP Photo / Risto Bozovic
Montenegro Demands Extradition of Ex-CIA Agent Said to Be Involved in Alleged Coup Plot
The document asked for a joint participation of the opposition forces in the elections and the agitation against the ruling Democratic Party of Socialists of Montenegro (DPS).

Namely, the opposition is demanding the creation of a technical government of civil unity where DPS, its opponents and independents would have an equal representation and which would be led by a non-partisan prime minister, as well as the holding of fair and transparent parliamentary elections.

READ MORE: Trump Ponders NATO Article 5: Montenegro 'May Get Aggressive & You're in WWIII'