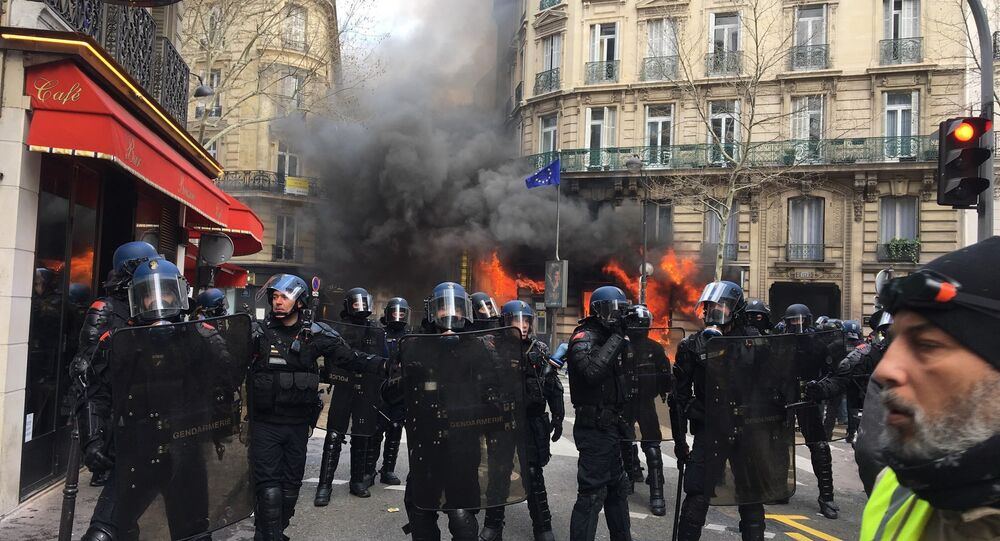 PARIS (Sputnik) - French Prime Minister announced on Monday that the government is replacing the head of Paris police following one more weekend of violent riots that plunged the French capital into chaos and resulted in dozens of injuries.

"On Wednesday the President of the Republic [Emmanuel Macron] will appoint Didier Lallement, former secretary general of the Interior Ministry and the current police chief of Nouvelle-Aquitaine region, as a new chief of [Paris] police," Philippe stated.

Lallement will replace Michel Delpuech who has been in the job since April 2017.

© Sputnik
Yellow Vests to 'Continue Fighting' Whatever Security Measures Gov't Takes - Spokesman
According to Philippe, the strategy taken by Paris police "has not been correctly executed" and the whole conduct of police operations "has been dysfunctional in certain neighborhoods."

France, especially Paris, has been swept by Yellow Vests protests since mid-November. Started initially as rallies against fuel tax hikes, the protests then grew into a full-scale movement which representatives took to the streets every Saturday. After the government abandoned its plans on rising the fuel tax, protesters continued hitting the streets across France, demanding less taxes, wage hikes and even the resignation of Macron.

The rallies often ended in violent confrontations between police and demonstrators, with the later hurling stones and projectiles at officers, smashing cars and shops windows and erecting and subsequently burning barricades. Police repeatedly resorted to tear gas and water cannon to disperse the most violent demonstrators, The clashes resulted in numerous injuries, some very severe, among both police and protesters.

This Saturday's protest in the heart of the City of Light did not become an exception. The capital plunged into chaos as violent demonstrators looted and torched shops, smashing windows, at the iconic Champs-Elysees avenue. The protesters also set a local bank on fire. Some 60 people were injuries during rallies. Back then Philippe acknowledged that there had been security "flaws" which needed to be reviewed.