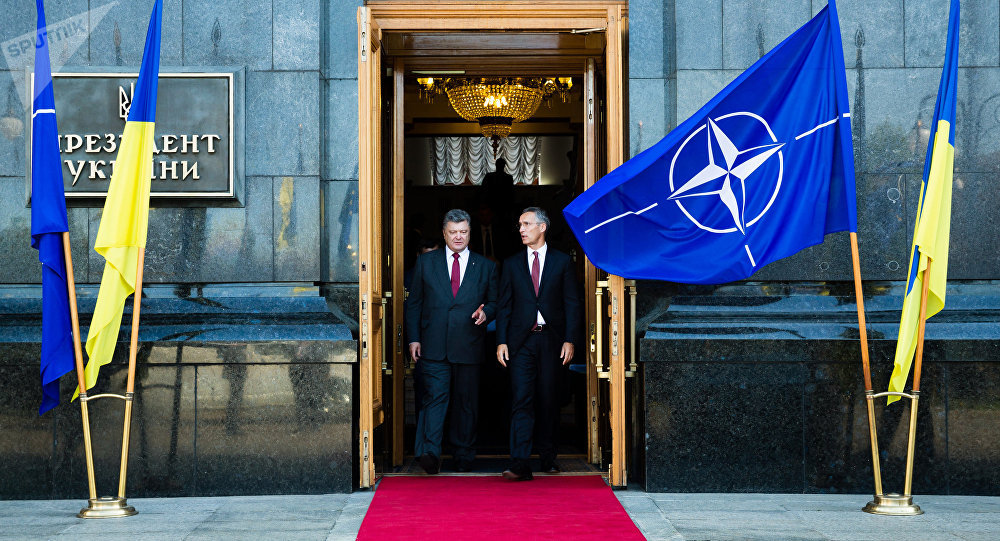 KIEV (Sputnik) - Former Georgian President Mikheil Saakashvili, who also used to serve as governor of Ukraine's Odessa Region, claimed on Tuesday that incumbent Ukrainian President Petro Poroshenko had allegedly informed the Georgian politician back in 2014 of intention to "exchange" Crimea for NATO and EU membership.

"I had a conversation with Poroshenko and he told me: 'You have almost got used to the idea that South Ossetia and Abkhazia will never become a part of Georgia again, and we should get used to the idea that Ukraine will never have Crimea again as well — but we will exchange it for membership in the European Union and NATO", Saakashvili said in an interview with Ukrainian journalist Dmitry Gordon.

Meanwhile, Saakashvili added that Crimea's rejoining Russia could serve as a reason why Ukraine might be not allowed to join the two blocs since "a territorial conflict arises".

The news comes ahead of the Ukrainian presidential election slated for 31 March.

© Sputnik / Alexey Malgavko
UK and US Always Knew Crimea Wanted to Re-join Russia – Archives
The Ukrainian president enacted last December the termination of the Treaty on Friendship with Russia. The friendship, cooperation and partnership treaty was signed on 31 May 1997. It is a key document that governs bilateral relations and provides for a strategic partnership between Russia and Ukraine.

Moreover, Poroshenko enacted in February another bill that introduced changes to the Ukrainian constitution to enshrine in the document Kiev's course on joining NATO and the European Union. The law also envisions removing articles that gave legal basis for the Russian Black Sea Fleet to be stationed in Crimea.

© REUTERS / Gleb Garanich
NATO Grants Ukraine Status of 'Aspirant Country' – Ukraine's Rada Deputy Speaker
The Russian Foreign Ministry has said that Kiev had violated the Treaty on Friendship, Cooperation, and Partnership between Ukraine and Russia, stressing that by choosing NATO accession as its strategic goal, Ukraine had violated Article 6 of the accord, under which the countries agreed to not make any deals with other nations that would be directed against each other. In particular, this article also aims to ensure that the territory of one country is not used at the expense of the others' security.

Crimea rejoined Russia in March 2014, when 97 percent of those participating in a regional referendum voted for the reunification. Russian President Vladimir Putin has said that the issue of Crimea's territorial belonging is "historically closed" as Crimean residents decided to rejoin Russia in accordance with democratic procedures.