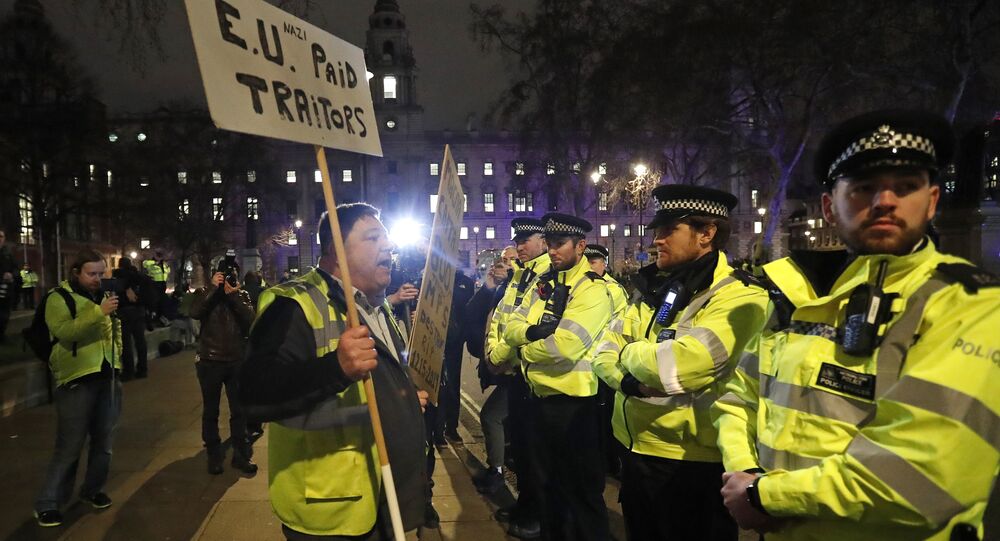 Since the establishment of a special unit by the UK police to investigate and act on threats to British politicians in 2016, there have been five bomb threats or hoaxes against MPs and seven instances of hoax noxious powder being sent to parliamentarians.

According to figures disclosed by the Metropolitan Police, the Parliamentary Liaison and Investigations Team (PLaIT) has received 558 complaints since its creation and recorded a significant rise in reports of assault or malicious communication against the Members of Parliament (MPs).

Reacting to the rise in the figures, the House of Commons leader Andrea Leadsom said:

"These figures are extremely concerning. All MPs come to parliament to do their best for their constituents — and it is completely unacceptable for them to become a target for abuse. I work closely with the House Authorities on security matters and I know they work hard to keep all MPs safe, but this is a reminder of the rising challenge we face and the need to do more to make politics a safer, more respectable place."

In 2016, Labour's Angela Eagle had a brick thrown through her constituency office window, and in 2017, the then Tory MP Sarah Wollaston said her office had been graffitied by masked men.

The Parliamentary Liaison and Investigation Team was launched by the Met following the murder of Jo Cox MP, who was shot dead by an assailant on June 16, 2016.

The prosecutor said at the time, Cox's murder was premeditated and "for a political and/or ideological cause," adding the killer — Thomas Mair, 53 — repeatedly said "Britain first" before the attack.

© AFP 2020 / DANIEL LEAL-OLIVAS
Floral tributes and candles placed by a picture of slain Labour MP Jo Cox at a vigil in Parliament square in London. (File)

PLaIT aimed to provide "a 24/7 contact point where details of non-urgent matters can be initially investigated, collated and distributed to appropriate units nationally for action. "

"They will also be able to signpost MPs to access Operation Bridger security options. The PLaIT is envisaged to be a support service which intends to maximise MP engagement," Neil Basu, assistant commissioner for counter-terrorism at Scotland Yard, said at the time.

In a more recent manifestation of aggression towards MPs in the UK, cases rooted in some way in the national Brexit debate have gained prominence.

Brought about by disagreement in public views on how Brexit, and accompanying issues of immigration and sovereignty, should be handled by Westminster officials, instances of abusive communication have been reported by MPs.

Rupa Huq, the Labour MP for Ealing Central and Acton, said she received an email, threatening her over her Brexit views.

In January, a Conservative MP and a Remainer Anna Soubry was confronted by a group of people on her way to work, who called her a "fascist." She was also called a liar and a Nazi — during live TV interviews that took place outside the Parliament.

The Met Police has in response issued a statement on Tuesday, saying that officers on duty near Parliament have been "briefed to intervene appropriately where they hear or see breaches of the law."

"An ongoing policing operation at the Parliamentary estate around Brexit continues and we have an appropriate policing plan in place. Our role is to facilitate peaceful protest and balance the needs and rights of all those present, including protestors, MPs and members of the public. We will deal robustly with incidents of harassment and abuse against anyone where that harassment or abuse constitutes a criminal offence. Officers in the area have been briefed to intervene appropriately where they hear or see breaches of the law," the statement said.

A January survey by Reach Plc newspaper publisher has shown that the British public is overwhelmingly unhappy with the MPs' handling of Brexit. MPs didn't get more than 10% approval rating when quizzed on how satisfied they were with MPs managing the Brexit debate.