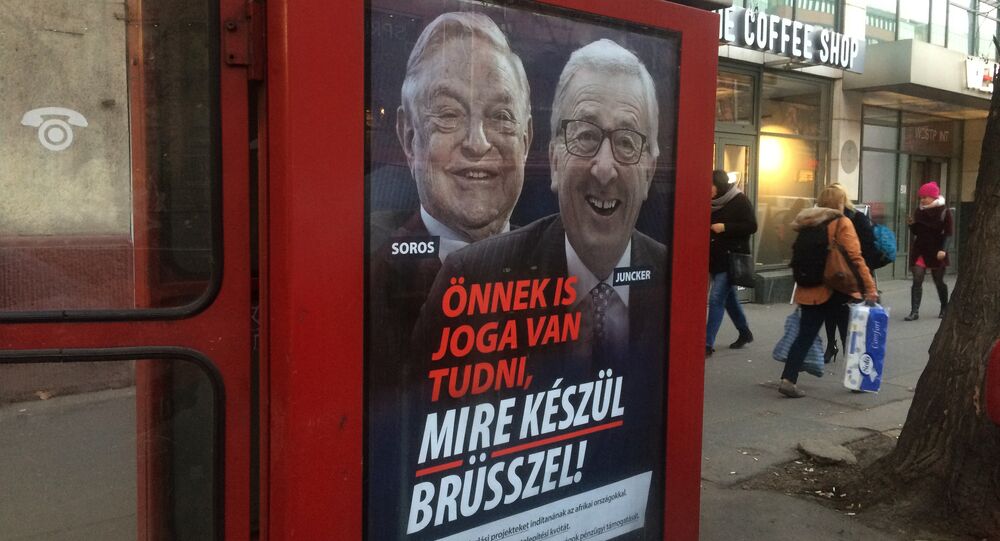 The original placards featuring Jean-Claude Juncker alongside George Soros, meant to show their closeness, has sparked fury in the EU, with the EU Commission president condemning the promo-campaign as “lies”, and demanding that the Hungarian governing party Fidesz be stripped of its membership within the EU Parliament’s centre-right bloc.

Hungary’s right-wing government announced Saturday that it would stop a poster campaign against the President of the European Commission Jean-Claude Juncker and go ahead with a new one against his deputy, First Vice-President Frans Timmermans.

"Hungarians have a right to know what kind of pro-migration plans are under preparation by the Brussels bureaucracy", government spokesman Zoltan Kovacs said. "That's why we undertook an information campaign, which will come to an end, according to original plans, on March 15th".

Shortly thereafter, Hungarian Prime Minister Viktor Orban detailed the move, saying that posters with Timmermans would replace those featuring Juncker, since “Mr Juncker is retiring and Mr Timmermans is taking his place”, Orban told the newspaper Die Welt am Sonntag in an interview.

Orban pointed out that Timmermans, the Party of European Socialists' candidate likely to replace Juncker as Commission president in the upcoming May elections, was, in agreement with his colleague, an “ally” of leftist billionaire George Soros. “Everyone has the right to know this”, the prime minister stressed to Die Welt, in reference to the similar caption on the posters.

The said placards essentially sport Juncker alongside the Hungarian-American Soros with captions that blast the pair for trying to join efforts to promote illegal migration in Hungary by imposing compulsory refugee resettlement quotas and disregarding EU member states’ right to border security.

The posters sparked backlash in Brussels and many conservative parties across the EU that largely pursue the same goals as Orban’s governing right-wing party Fidesz. The poster issue hit a nerve with Juncker, notably a member of the same conservative bloc in the EU Parliament — the EPP — that Fidesz is part of. He accused the campaign of spreading “lies” and even called on the EPP to deprive Fidesz of its membership.

Other EPP members followed suit in expressing their criticism, including German Chancellor Angela Merkel, something which prompted Orban to refer to Hungary’s EPP critics as “useful idiots” of the left, since they were dividing the conservative bloc.

The Hungarian government’s chief spokesman, Zoltan Kovacs, in turn, rejected suggestions that Fidesz would be forced to leave the EPP, citing a procedure that can only be kick-started by the EPP’s most senior leaders or a joint letter from at least seven parties in five countries.

A staunch opponent of illegal immigration and migrant quotas in the EU, Hungarian Prime Minister Viktor Orban has repeatedly stood up against Soros and his NGOs’, Open Society Foundations’, programmes endorsing mass immigration, which he says are meant to weaken the largely Christian European nations.

To resolve the issue, the country’s parliament last year passed the so-called “Stop Soros” bill, criminalising aid to illegal migrants and making it harder for refugees to seek asylum in Hungary. In a parallel move, in summer 2018, Soros’ initially Budapest-based foundations network announced the relocation of its Hungarian office to Berlin.