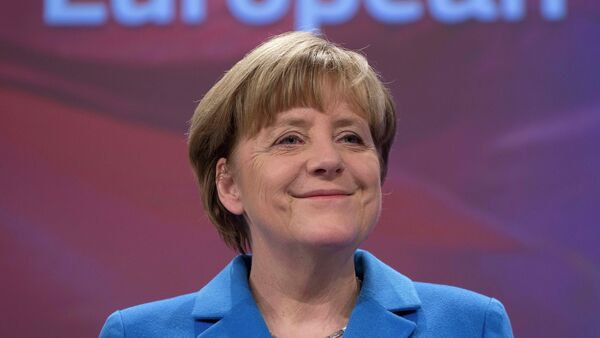 © REUTERS / Yves Herman
Subscribe
International
India
Africa
Calls have been growing for the exclusion of Hungary’s ruling party Fidesz from the majority centre-right European People’s Party (EPP) group in the European parliament due to Fidesz’s hard-line stance on immigration.

“Jean-Claude Juncker has my full solidarity, and we will also make that clear in discussions with Hungary”, the chancellor said when confronted by reporters in Berlin on Thursday.

Merkel, however, refused to answer whether Orban’s party should be expelled from the EPP, which groups together Christian Democratic and centre-right parties, ahead of May elections to the European Parliament.

In the meantime, Merkel’s colleagues have distanced themselves from Orban. For instance, her successor as chair of the Christian Democratic Union (CDU), Annegret Kramp-Karrenbauer told Der Spiegel that cooperation between the two parties would be halted unless they managed to find common ground on the EPP’s goals.

“It’s up to the Hungarians to clearly prove that they still belong in the EPP”, she said.

Speaking to Frankfurter Allgemeine Zeitung, Markus Söder, the leader of the Christian Social Union (CSU), which historically has had close ties with Hungary, also slammed Orban’s remarks as “unacceptable”:

“The recent comments by Viktor Orban are unacceptable. You have to make it clear what’s allowed and what’s not. Viktor Orban’s chosen path is, unfortunately going in the wrong direction”.

“They didn’t vote for me in the European Parliament. […] I remember Ms Le Pen, she said ‘I’m not voting for you’. I said: ‘I don’t want your vote’. There are certain votes you just don’t want”, Juncker said.

READ MORE: Scapegoat or Bully? Why EU Right, Erdogan and Facebook Gang Up on Soros

The posters with pictures of Juncker and Soros alongside the accusations were denounced by a spokesman for the European Commission as a “ludicrous conspiracy theory”.

Hungarian 'Conspiracy Theory' Over Soros, Juncker 'Beggars Belief' - EU
This is not the first time that Juncker and Orban have clashed, either directly or indirectly: just two months ago, the European Commission president blasted the Hungarian prime minister for being “the origin of fake news”, after Orban blamed him and migrants for Brexit.

In 2015, Juncker also warned Orban that if the Hungarian government reintroduces the death penalty, the country would be forced to leave the European Union. The same year, Juncker was filmed jokingly greeting Orban with a “Hello, dictator!” exclamation at a Riga summit.

Orban has largely campaigned against immigration and refugee resettlement quotas, having thus emerged as one of the most prominent right-wing politicians in Europe.

The Hungarian prime minister has on a multitude of occasions accused Soros of encouraging mass immigration in order to weaken European nations, while the country’s parliament passed the so-called “Stop Soros” bill, criminalising aid to illegal migrants and making it harder for refugees to seek asylum in Hungary.