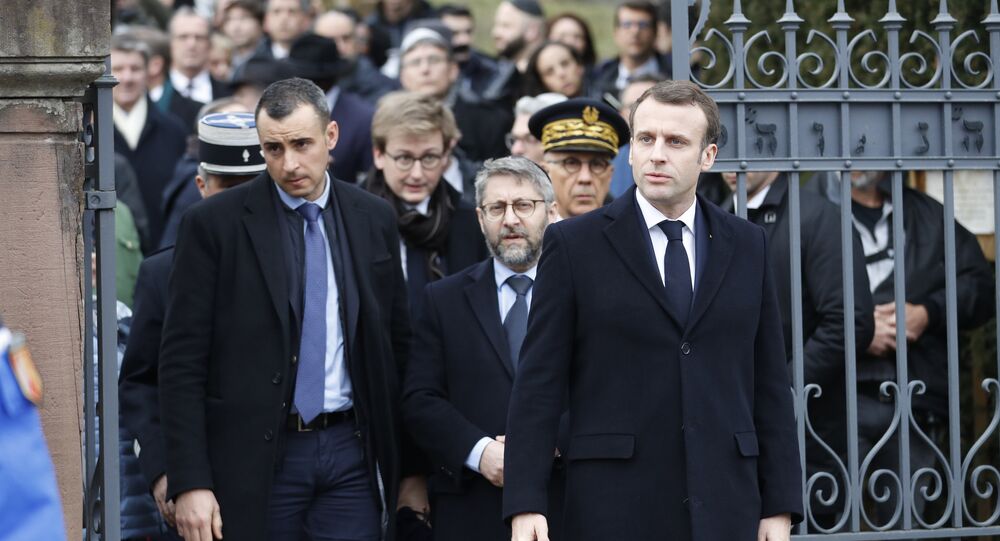 This week, the French people took to the streets throughout the country to protest against anti-Semitism following a recent outbreak of anti-Semitic attacks, according to local media reports.

French President Emmanuel Macron has delivered a speech at the annual dinner of the Council of Jewish Institutions in France, stressing that anti-Semitism had grown in recent years "and the situation has got worse in recent weeks," various French media reported.

"Our country, and for that matter all of Europe and most Western democracies, seems to be facing a resurgence of anti-Semitism unseen since World War II", he noted, as cited by France 24.

Macron continued by saying that France must draw "new red lines" against intolerance as he stated he had plans for a bill to combat online hate speech and called for the termination of three extremist right-wing groups, according to BFM TV.

READ MORE: About 80 Jewish Graves Desecrated With Swastikas at Cemetery in France

© Sputnik
WATCH French Citizens March in Protest of Rising Anti-Semitism in the Country
On 19 February, around 80 graves had been reportedly vandalised at a Jewish cemetery in eastern France. The attack took place shortly before the demonstrations were slated to take place the same day in Paris and other French cities to denounce a surge in anti-Semitic sentiment in the country.

French Prime Minister Edouard Philippe alongside 14 political parties, including the Socialists, Macron's La Republique En Marche, the Republicans and 19 other members of the government, have reportedly taken part in the Paris march.

According to reports, among the recent incidents that stirred worries of renewed anti-Semitism was a flow of hate speech aimed at Jewish philosopher Alain Finkielkraut during a 16 February yellow vests match.

In February, French authorities reported a 74 percent increase in anti-Semitic incidents in 2018 over the previous year.