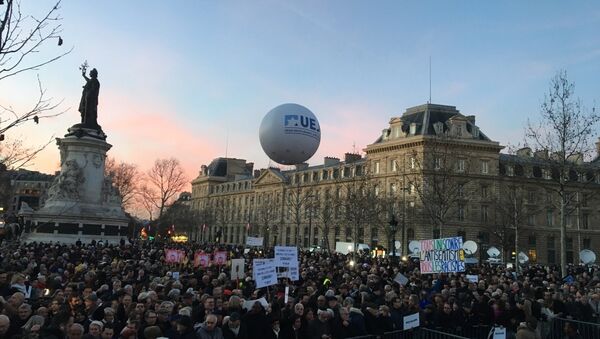 © Sputnik
Subscribe
Some 14 French political parties, including president Emmanuel Macron's La République En Marche!, as well as the Republicans, called on the French electorate to hold political demonstrations all over the country under the slogan "No to anti-Semitism".

In addition to the prime minister, 19 members of the government are expected to take part in the march, along with former French presidents Francois Hollande and Nicolas Sarkozy.

Recently, the government reported that anti-Semitism is on rise in the country; last year there were 541 registered incidents, up 74 per cent from the 311 registered in 2017.

The march is taking place just hours after about 80 graves were discovered vandalised, painted with swastikas, in a Jewish cemetery in eastern France.

Reacting to the reports about the growing anti-Semitism, as well as the news about the vandalized graves at the Jewish cemetery, Israeli Minister of Construction and Housing Maj. Gen. Yoav Galant called on the Jewish people to relocate to Israel.

"I strongly condemn anti-Semitism in France and urge the Jewish people to come home, emigrate to Israel," Galant wrote on Twitter.

At the same time, French President Emmanuel Macron, commenting on the reports, stated that he would visit the Jewish cemetery in the French eastern commune of Quatzenheim, where the graves were vandalized.

"We will take action, we will pass laws, and we will impose punishments," the president said, adding that "those who have done this are not worthy of the Republic".