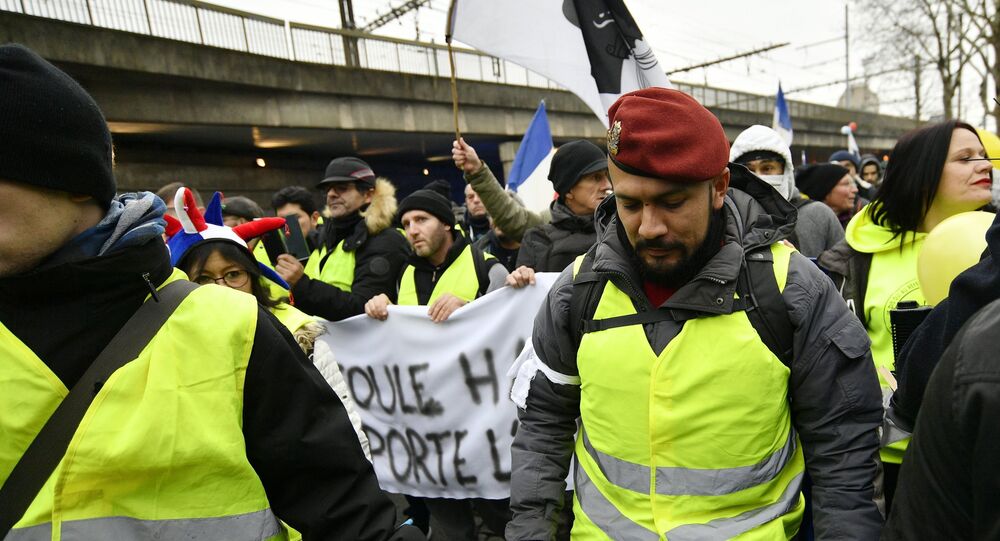 French President Emmanuel Macron took to Twitter to denounce what he called "anti-Semitic insults" against French-Jewish writer and philosopher Alain Finkielkraut, who was targeted by a group of the so-called yellow vests in Paris on Saturday.

TWEET: "The son of Polish immigrants who became a French academician, Alain Finkielkraut is not only a prominent man of letters but the symbol of what the Republic allows everyone".

TWEET: "The anti-Semitic insults he has been subjected to are the absolute negation of what we are and what makes us a great nation. We will not tolerate it".

According to the footage posted by Yahoo! News, several protesters can be heard yelling: "Dirty Jew", "go home", "return to Tel Aviv", "dirty Zionist sh*t", "bastard", "big sh*t", and many other profanities.

Speaking with Journal du Dimanche, 69-year-old Finkielkraut said he would have been afraid if the police had not been there:

"I felt absolute hatred and, unfortunately, this is not the first time", he told the French newspaper, while adding that not all the protesters were demonstrating a hostile attitude towards him, and one even suggested he put on a yellow vest and join the demonstration, while another praised his work.

© CC BY 2.0 / Christophe LEUNG
Several Injured as Car Rams Into Yellow Vests Rally (VIDEO)
From the very onset, Finkielkraut has expressed his solidarity with the yellow vests protesters, but in an interview published Saturday in Le Figaro, he slammed the leaders of the movement and was saddened by the violent turn of events, saying that "arrogance has changed sides".

President Macron was not the only high-ranking official to condemn the incident and send a message of support for the renowned writer.

Interior Minister Christophe Castaner said it was "simply intolerable" and spoke with Finkielkraut to "assure him of [his] absolute support".

French government spokesperson Benjamin Griveaux also took to the virtual space to denounce the verbal attack on the philosopher, tweeting that "hatred is a foul beast lurking in the streets of Paris", while adding that "those who insulted had their faces uncovered. I hope they will be identified, prosecuted and heavily condemned".

The Paris prosecutor's office said on Sunday that an investigation had been launched into "public insult based on origin, ethnicity, nationality, race or religion".

© Sputnik
LIVE UPDATES: Police Use Tear Gas as Yellow Vests Protests Rock Paris for 14th Week (VIDEOS)
Since January 2016, Finkielkraut has been a member of the French Academy, the prestigious institution in charge of defining the French language.

The yellow vests protests kicked off three months ago over a planned hike in fuel taxes, but even after the French government gave up on the envisaged increase, the rallies didn't stop.

Instead, the movement has morphed into broader anti-government protests, with many demanding that Macron resign.