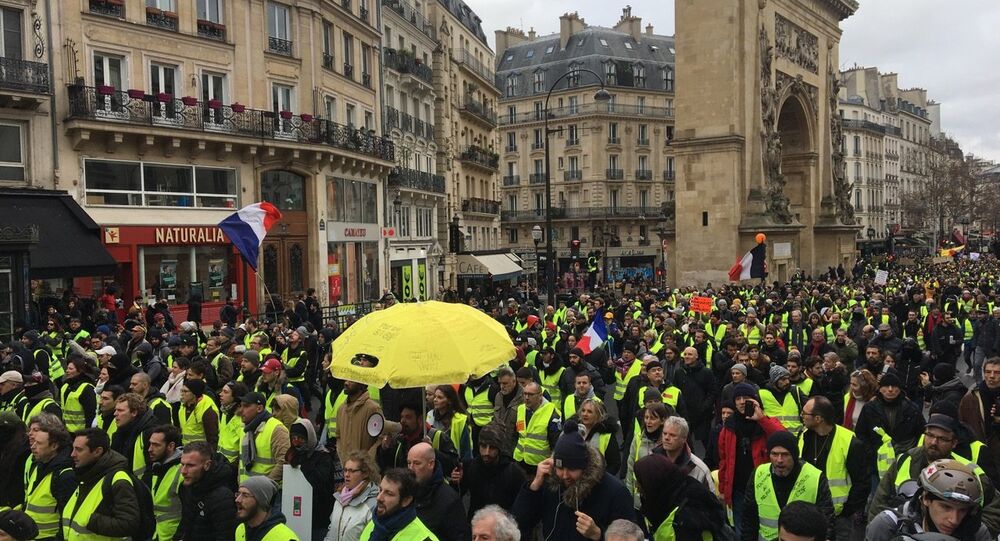 The so-called “yellow vests” protests have been raging across France since mid-November, with the movement calling for the resignation of French President Emmanuel Macron over his government’s policies.

The official Twitter account of an Italian political show, “Piazzapulita", released a video of an interview with a man they claim is Christophe Chalençon, one of the leaders of the yellow vests movement.

While the footage, apparently filmed on a hidden camera, shows only the legs of a man, he can be heard speaking about the ongoing unrest in France.

The man, who is alleged to be Chalençon, is heard saying that if anything happens to him, French President Emmanuel Macron would end up on the guillotine.

“I know I’m risking a lot. I can receive a bullet to the head at any moment. But I don’t give a f*ck. I’ll stick to my beliefs because if they put a bullet to my head, Macron would face the guillotine. We have come to such a point of confrontation that if they kill me, he is dead too. Because the people [will] enter the Elysee and tear everything down. Him, his wife, and all the gang”, the voice is heard saying.

TWEET: “Christophe Chalençon at #Piazzapulita: ‘We have paramilitaries ready to intervene because they too want to bring down the government’. So Christophe Chalençon, one of the leaders of the #giletgialli met by Di Maio and Di Battista in off air scoop @alebucc”.

The man then claims that there are “paramilitaries” who are ready to intervene to help overthrow the government.

He then clarifies that those “paramilitaries” had retired from the army and were against the government: “Yes, this is worrisome but you don’t realise: Macron is afraid, very, very afraid”.

Once the video was unearthed online, French Interior Minister Christophe Castaner was quick to react, wondering if it was an “Italian comedy” or a “new personal delirium”:

TWEET: “So one of the leaders of the Yellow Vests announces a military coup… Is it an Italian comedy or just a new personal delirium?”

The alleged interview was held in wake of a meeting between Italian Deputy Prime Minister Luigi Di Maio and the yellow vests on 5 February, which was harshly criticised by the French authorities as an unacceptable “provocation”, prompting Paris to recall its ambassador to Rome.

“This new provocation is not acceptable between neighbouring countries and partners in the European Union. Mr Di Maio, who holds government responsibilities, must take care not to undermine, through his repeated interferences, our bilateral relations, in the interest of both France and Italy”, a Foreign Ministry spokesperson said on 6 February.

© AP Photo / Francisco Seco
Yellow Vests Protesters Vandalize House of Ex-Belgian PM - Police
In the meantime, a survey by pollster Elabe found that 56 percent of French people want the yellow vests to stop their weekly protests, which rapidly turn violent. Many believe that demonstrators, marching since mid-November each weekend, no longer reflect the group’s early demands.

The protests initially erupted over a hike in the diesel price, and the movement earned its name after the high-visibility yellow vests that French motorists are required to carry in their cars.

Even though the government abandoned its plans to increase the diesel price, the protests didn’t stop, having instead morphed into a broader movement against President Macron and his government, with many demanding that he resign.