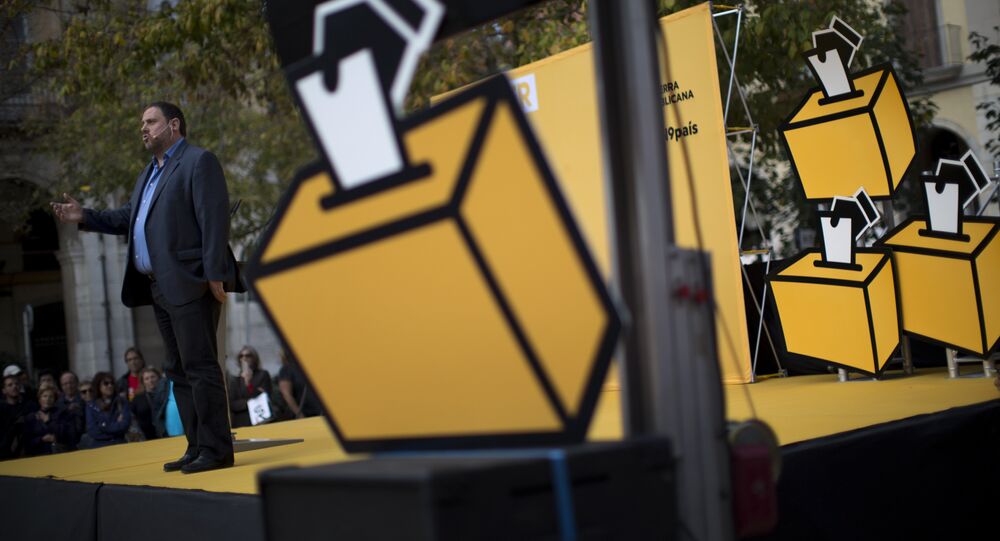 MADRID (Sputnik) - The former Catalan Vice President and leader of the Republican Left of Catalonia political party, Oriol Junqueras, called himself a "political prisoner" during the hearings on the Catalan case in the Supreme Court of Spain on Thursday.

"I now consider myself a political prisoner", Junqueras said when asked by his lawyer about his current status.

He refused to answer questions from the prosecution.

"I am blamed for my ideas, not for my actions. This is a political court", Junqueras stated.

The politician also refused to be provided with a translator from Catalan to Spanish, giving evidence in Spanish.

© Sputnik / Javier Luengo
Catalan Independence Referendum 'Would be Too Controversial for Any Spanish Gov't to Go Ahead With' - Prof.
Junqueras is charged with rebellion and misuse of public funds. The Spanish Prosecutor's Office is seeking a 25-year prison sentence and a 25-year ban on holding public office for Junqueras. State advocacy charges him with rebellion and demands a 12-year sentence, while the right-wing party VOX demands a 74-year sentence for Junqueras.

Earlier this week, the Supreme Court of Spain began hearings on the merits of the case of Catalan referendum and the declaration of independence by the regional parliament in October 2017.

A total of 12 Catalan politicians are on trial, nine of them, including Junqueras and former speaker of Catalan parliament, Carme Forcadell, have been charged with organising a coup. The prosecutor's office, state advocacy and the VOX party represent the prosecution in the trial.

On October 1, 2017, Catalonia held an independence referendum, which resulted in over 90 percent of voters backing the region's autonomy. Madrid refused to recognise its results, but this did not preclude the Catalan parliament from declaring independence on October 27 of that year. This prompted the Spanish government to dismiss the regional authorities and impose direct rule over Catalonia.

When the new Catalan government led by President Quim Torra came to power in June, Madrid restored the region's autonomy.