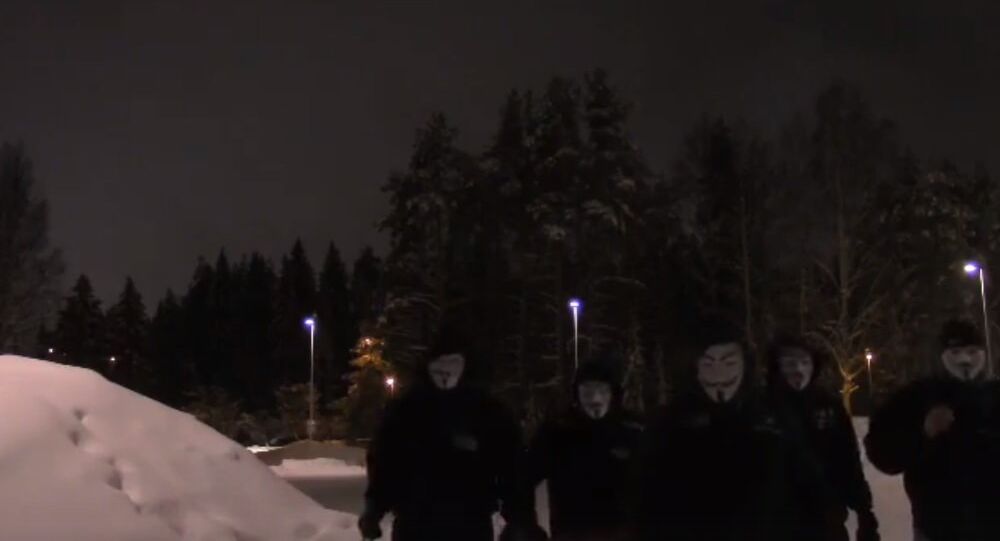 The vigilantes' recent video, in which they claimed Finland to be overrun by "sex tourists" has arrived amidst a grooming gang scandal which has implicated immigrants and asylum-seekers from the Middle East.

The Finnish police and the National Prosecutor General's Office are investigating whether the new Soldiers of Odin video, in which they declare a hunt for rapists and paedophiles, constitutes hate speech and instigation to violence, the Finnish daily newspaper Hufvudstadsbladet reported.

In the video, which is provided with English and Arabic subtitles, the group claims that it has made false profiles in social media, posing as young girls. With the help of the profiles, the group seeks to reveal men in search of sexual contact with young girls on the web.

The video, which has since been deleted from both Facebook and Vimeo, shows a group of masked men armed with bats and chains march onwards to the camera amid winter darkness, accompanied by heavy metal music. The speaker of the group then claims Finland has been invaded by "sex tourists". As the authorities "do nothing", he claims, the people themselves have to protect their children. The Soldiers of Odin also claimed that half of the sexual propositions to underage girls came from Arabs. However, the group stressed that the hunt is open for "domestic paedophiles and rapists of all colours".

"We guarantee you that a date with us will be memorable. And hey, don't worry, we won't call the police", the masked man said in the video, which at the time of writing is still available on Soldiers of Odin founder Mika Ranta's page on the Russian social network Vkontakte.

According to criminal commissioner Pekka Hätönen, the new video by the Soldiers of Odin can be classified as an instigation to hatred toward ethnic groups. However, for further action, he must first contact the National Prosecutor's Office, which is responsible for targeting hate speech on the internet.

Commenting on the disappearance of the video from Vimeo and Facebook, Hätönen stressed that the police did nothing to remove the videos and suggested that they were most likely deleted by the services after users reported them.

Hätönen also emphasised that any consequences will only apply to the people who filmed and spread the video, not the group as a whole.

According to Hufvudstadsbladet, the Soldiers of Odin had their heyday at the height of the migrant crisis in 2015-2016, when members of the anti-crime group started patrolling several Finnish cities and mushroomed first into neighbouring countries and even crossing the Atlantic. After that, it's believed that there was a hiatus in the group's activity.

However, "since last autumn, they have started to re-appear, both on the street and on the internet", Hätönen stressed.

According to its own count, the Soldiers of Odin are present in 53 Finnish cities and towns.

In the Scandinavian press, the Soldiers of Odin are often portrayed as neo-Nazis, which the group itself and its flanks in various countries vehemently deny. Some of its members, including founder Mika Ranta, have been convicted of abuse.

At present, several men with an immigrant background are being investigated for sex crimes involving girls as young as 10 committed in the northern Finnish town of Oulu, as well as the capital city. All of the suspects are either migrants or asylum seekers. The grooming gang scandal was sternly condemned by the country's top-ranking officials, including President Sauli Niinistö, who called it "unbearable".