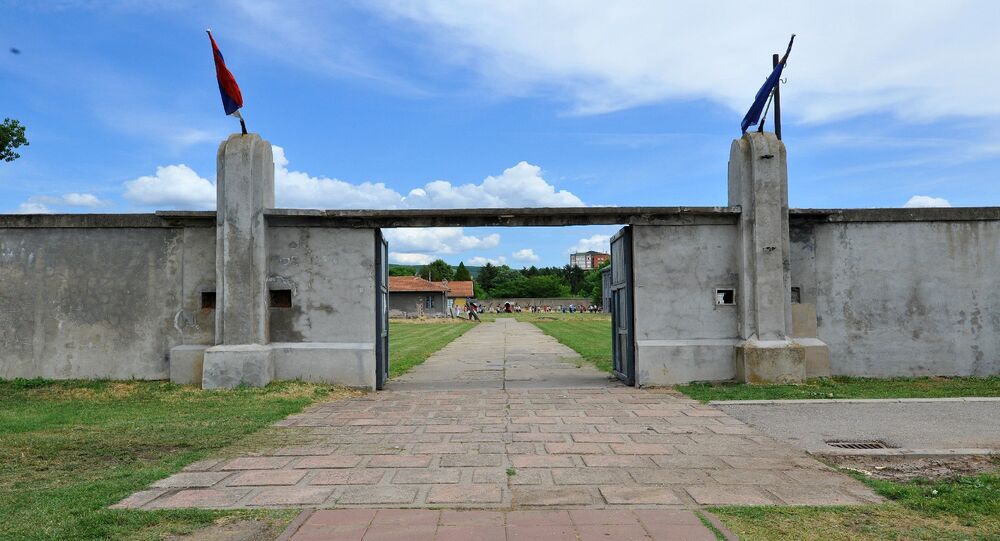 On 12 February, a mourning ceremony for the 77th anniversary of the uprising at the Crveni Krst Nazi labor camp took place in a Serbian city of Nis. Following the uprising, a large group of inmates managed to escape the camp and join the partisan forces.

The name of the concentration camp in Serbia's Nis should not fool you: Crveni Krst ("Red Cross") was named after a nearby railroad station, and it has nothing to do with charity.

Initially, the Nazis set up a POW camp in warehouses and barracks located in the industrial quarter of Nis in 1941. However, the influx of POWs ceased shortly, partially thanks to mass shootings. According to data from Venceslav Glisic's 1970 book "Terror and Crimes of Nazi Germany in Serbia, 1941-1944," the Germans would shoot 100 Serbian prisoners of war for every Wehrmacht soldier killed, and 50 for every soldier injured.

In June 1941, after the German attack on the Soviet Union, the camp was first turned into a prison, and later that year, by September, it had been turned into a concentration camp for Jews, gypsies and various "enemies of the Reich." Curiously, the Nazis kept both monarchist (chetniks) and communist (partisans) Serbian militia fighters there.

© REUTERS / Alessandro Bianchi
‘Juden’: Anti-Semitic Graffiti Reminiscent of Nazi Germany Discovered in Paris
In October 1944, shortly before the camp was liberated, the Germans destroyed the archives and most of the camp documents, so the exact number of the victims varies among accounts. Some 10,000 out of 30-40,000 inmates were shot at nearby Bubanj hill.

According to articles and books by Serbian historian Aleksandar Dindic, the inmates were divided into five categories: the prisoners of war, the Jews, the partisans, the chetniks and the foreigners. As for going to Bubanj hill, there was no difference between the categories: for Nazis, all of them were "fifth grade people."

The local "way of life" had its peculiar features, Nebojsa Ozimic, the curator of the memorial complex opened at the former camp, noted in a 2016 interview for Serbian website Blic. For example, there were child inmates, and Nazi authorities allowed their fathers to free them by taking their places voluntarily. There were also solitary confinement cells where the floor was covered entirely with barbed wire: it was impossible to sit or lay down, let alone sleep, and sleep deprivation quickly drove the inmates insane.

In his 2011 monograph "The Camp at Crveni Krst," Ozmic wrote that the mass shootings were conducted on schedule: on Tuesdays and Fridays. However, on 12 February 1942, a Thursday, a group of inmates decided not to wait for the Friday which could have become their last.

The curator told Sputnik about the first mass escape from the Nazi concentration camp.

"Being aware of a mass shooting scheduled for 13 February — which was an alleged ‘vengeance' for killed Nazi soldiers — a group of inmates decided to run. On evening of 12 February, the inmates rushed towards the camp gates. However, the Nazis were aware of their plan and closed the gates. Then the inmates broke right through the barbed wire. Of 147 participants of the uprising, 42 were killed, and 105 managed to escape."

Memories of one escapee are presented in a 1984 book "The Camp by Crveni Krst at Nis," by Miroslav Milovanovic.

"The snow of the entire courtyard was red from blood. The tri-layered barbed wire fence was shredded as if on a battlefield. After everything happened, [the Nazis] led a group of Jews with shovels and grubbings to bury pits, where the dead bodies were buried later that day. Citizens who had someone of kin in the camp kept walking along the fence that day and the following days, trying to spot whether their relatives were alive or not."

© East News / Courtesy Everett Collection
German Sausage Museum Ignites Fury Over Plan to Move to Alleged Ex-Nazi Camp
According to Ozimic, this was the first concentration camp uprising in the entirety of occupied Europe. The bravery of the unarmed and emaciated people who dared to escape by any means necessary or die trying cost dearly for the remaining inmates: approximately 1,000 inmates were shot after the escape in retaliation, 100 people for every escapee.

Ozimic noted that 12 February became an official remembrance day for all Nazi victims in 1945. In 1969, the memorial complex "12 February" was opened at the former concentration camp. The museum complex was damaged during the 1999 NATO bombings of Yugoslavia, but it's mostly renovated now and features a large exhibit dedicated to camp life.

This year's mourning ceremonies were organized by the "Memorial" International Center on Preserving Cultural and Historic Heritage in Eastern Europe (Serbia), with support from the Serbian Ministry of Culture and the Nis town council. The event also included a "Faces of Concentration Camps" photo exhibit, which has become a part of the international social project of the Poklonnaya Gora Victory Museum and the Pechersky Fund named "Concentration Camps Resistance Heroes."