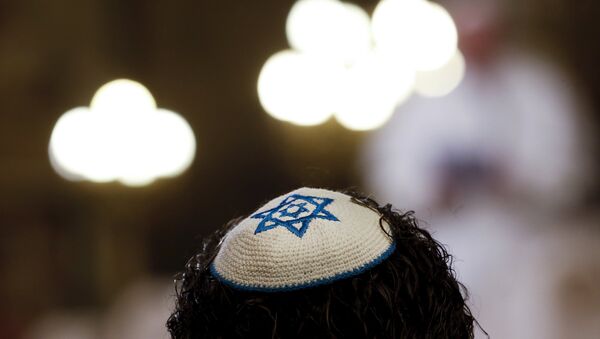 Paris authorities have launched an investigation into anti-Semitic graffiti sprayed across a window of the Bagelstein bakery over the weekend.

The graffiti in question is the word "Juden!" which means "Jews" in German. It was sprayed in yellow paint. During Germany's Nazi years, Jews were obliged to wear yellow Stars of David with the word written on them; the word was also painted over Jewish establishments.

Australian Teens Chant 'Gas Jews' Amid Rise in Anti-Semitic Assaults – Reports
According to a report by The Local, the bakery is located in Paris's old Jewish quarter.

Benjamin Griveaux, a government spokesman and member of France's National Assembly, condemned the act on Twitter, calling it, "The most filthy anti-Semitism in the streets of the city of light."

The Representative Council of Jewish Institutions in France expressed "indignation and anger" after the discovery, calling the crime an "act that recalls the darkest hours of history," Fox News reports. Another organization, the French League Against Racism and Anti-Semitism, likened the photo of the 2019 graffiti to a historic photo of "Jude" scrawled across a Jewish shop in Nazi Germany.

​Bagelstein, a bakery chain in France, has reportedly filed a complaint, and an investigation into incitement of hatred and degradation of public property has been opened.

Last year, French Prime Minister Edouard Philippe announced a 69 percent rise in anti-Semitic crimes in the first nine months of 2018 compared to the same period in 2017, Fox reports. Despite the government's continued efforts to fight it, "we are very far from having finished with anti-Semitism," he wrote in a Facebook post. In previous years, anti-Semitic acts in France had declined, he noted. There were 311 anti-Semitic acts reported in 2017 overall.

000000
Popular comments
i think people are REALLY, REALLY tired of this so called "anti-Semitic" garbage. i know I am, and no Jew is going to change that, until they change themselves as people in their approach to others.

EU dude
12 February 2019, 08:56 GMT2
000000
The yellow vest are the best thing that has ever happened in France in the last 30years, it is supported by a huge majority of French people, except for the elite, and the chosen people of god who are now using the Joker card of "Anti-Semitism" to discredit the movement, just as they accuse anyone who does not buy the official, and pathetic 9-11 narrative, with the same accusation of "Anti-f**king Semitism", one wonders why? Touché isn’t it? Just wait a couple of weeks, till we discover that these tags were perpetrated by some Jewish Zio fanatics, as it has often happened in the past everywhere. Crying wolf all the time, will only make the entire humanity dislike, and distrust these deceiving and lying supremacists. In France there's a powerful and itimidating Jewish organisation called LICRA "Ligue Internationale Contre le Racism, et l'Anti-Sémitisme", just the name says it all, it shows how racist and exclusive these manipulative people are, to distinguish between Racism and Anti-Semitism.