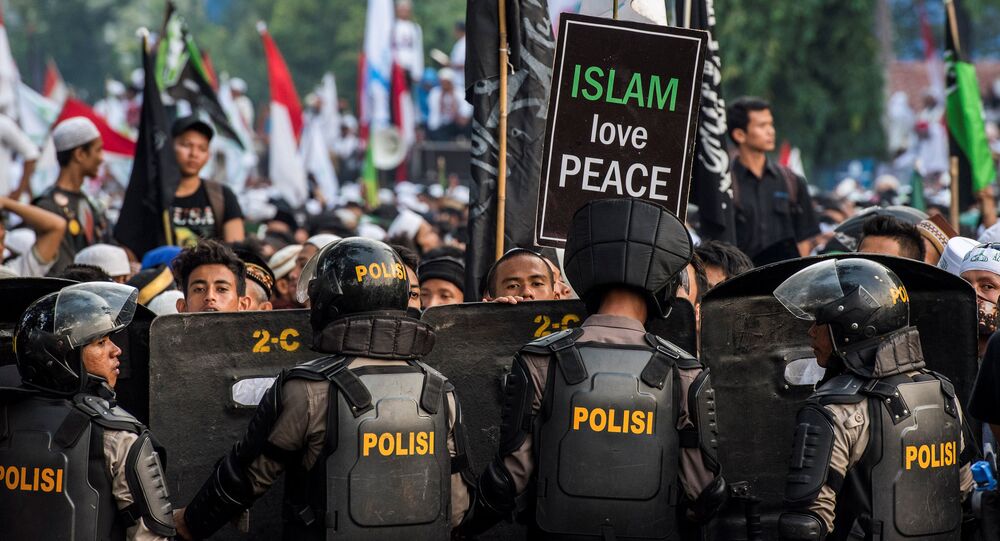 Former Norwegian ambassador to Saudi Arabia Carl Schiøtz Wibye has argued that the worldwide Muslim campaign against critics of Islam was triggered by the Islamic backlash over cartoons of Prophet Muhammad, which was followed by the worldwide protests against the satirical French weekly magazine Charlie Hebdo.

The organisation Ex-Muslims of Norway, which by its own admission, fights for gender equality, integration, freedom of expression, human rights, the normalisation of "apostasy" and criticism of Islam, has accused Facebook of censorship after some of its posts were deleted.

According to the Norwegian news outlet Rights.no, Ex-Muslims of Norway leader Cemal Yucel Knudsen was banned from Facebook for a week for allegedly violating the community standards by posting a meme about the hijab.

In the pic shared by Knudsen, a Muslim mother tells her son that the hijab is her free choice. When asked what would happen if she chooses not to wear it, she comes with the following explanation: "First, your daddy will kick me in the gut. My family will disown me and friends will talk s**t about me. After I die, Allah will burn me in hell."

​Ex-Muslims of Norway bills itself as congregation of atheists, free thinkers, humanists, agnostics and former Muslims.

Former Norwegian ambassador to Saudi Arabia and author of the book "The Kingdom of Terror" Carl Schiøtz Wibye weighed in, according to the Norwegian news outlet Resett.

"Many people are wondering why Facebook is increasingly often deleting posts of the Islam-critical sort. I would assume that the answer is quite simple: whenever such posts appear, the Muslim congregation in Norway mobilises and creates a 'perfect storm' aimed at the post", Wibye said.

According to Wibye, faced with sufficiently wide-spread protests, Facebook "lays itself flat" and removes the posts.

"We will only see more of this as we import more and more religiously active (and non-working) Muslims to Norway. It's part of the gradual global constraint of freedom of expression with regard to any critical comment on Islam", the former ambassador wrote.

According to Carl Schiøtz Wibye, this trend began with the so-called "cartoons battle" when a Danish daily newspaper published caricatures of Prophet Muhammad, and continued with Charlie Hebdo, the French satirical weekly that also made fun of the centrepiece of Islam.

"Now we notice the ripple effects even in Norway. There aren't many people who have the backbone to resist this pressure. Welcome to 2084", Wibye said.

Cemal Yucel Knudsen's post was ultimately restored and he, as his organisation put it, was "released from the Facebook jail".

Carl Schiøtz Wibye is a former Norwegian diplomat, who served as an ambassador to Saudi Arabia from 2009 to 2014. Wibye has a military background in the Norwegian Army Corps of Engineers and is a master of Political Sciences from Oslo University.

Wibye is the author of "The Kingdom of Terror", which maintains that Saudi Wahhabism is a belligerent cult rather than a religion, driven by fanatical calls for a holy war on all "infidels" including Jews, Christians, Shia-Muslims, Sufi-Muslims and even some Sunni-Muslims who are "not pure enough". Wibye is not against Islam as such, but warns against the extremism cult within Islam, which with the support of the Saudi-backed "Quran schools" across the globe may have "catastrophic effects".