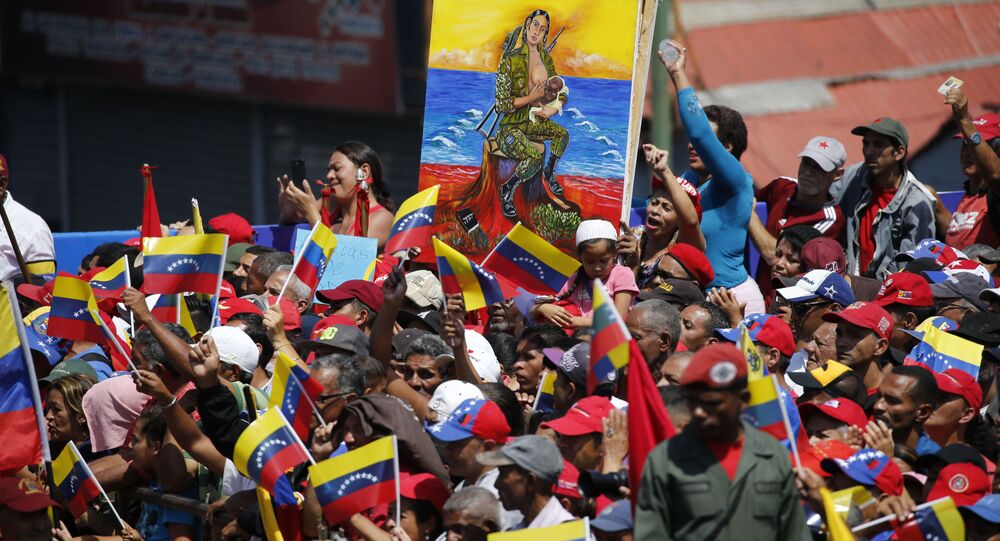 US President Donald Trump earlier confirmed that US military intervention in Venezuela was "an option." His statement came amid media speculation after White House National Security Adviser John Bolton was photographed holding a yellow notepad that read: "5,000 troops to Colombia” during a press briefing on new sanctions against Venezuela.

Russian Deputy Foreign Minister Sergei Ryabkov has stated that military interference in Venezuela's internal affairs would be the "worst scenario", adding that such an intervention would have "catastrophic" consequences.

"We will not speculate about what the results of any contacts would be, but we strictly adhere to the line that destructive external intervention, especially armed intervention in Venezuelan affairs, would be the worst possible scenario. Its consequences are difficult to predict, but it is clear that the hypothetical use of force in this situation will lead to a surge in bloodshed and to consequences that will also have effect outside Venezuela, Ryabkov said commenting on meetings by the contact group on Venezuela in Uruguay.

© REUTERS / Manaure Quintero
Threat of Invasion of Venezuela Remains - Envoy to Russia
According to him, "it is premature to give assessments, but if the outcome of the event in Montevideo is perceived so that the balance… will shift towards pressure on the legitimate authorities in Caracas, this will only have to be regretted because this could be another missed opportunity".

Russia is in contact with the EU, Caracas, and humanitarian organisations regarding the crisis in Venezuela, the deputy foreign minister stated.

"We are in contact with all humanitarian organisations. We do not approve of everything they have been doing during the Venezuelan crisis… But there is no reason for us to be concerned or alarmed. In most cases, humanitarian organisations are aware of their duty to the people and focus on addressing shortages of necessities, medicine, and do not allow their work to be used as an instrument of pressure", he said.

READ MORE: Pompeo Hopes Venezuela to Be Independent From Cuba, Russia After Change of Power

© AP Photo / Fernando Llano
US Using Delivery of Aid as Pretext to Start War Against Venezuela - Venezuelan Envoy
According to Brussels, the group includes the bloc itself and some of its member states, as well as a number of Latin American countries. The contact group’s work will be aimed at creating a common understanding of the situation in Venezuela by key international players and will seek a peaceful resolution to the current crisis in the South American country.

In January, Juan Guaido, the speaker of the opposition-led National Assembly, proclaimed himself Venezuela's interim president, contesting Maduro's re-election last year. The opposition leader was recognised by the United States and some other countries. Russia and China, as well as several other nations, have backed Maduro as the country's legitimate president and demanded the principle of non-interference in Venezuela's internal affairs be respected.

#Venezuela: ‘EU Should Have More Mature Stance in Favour of Democracy’ – Analyst