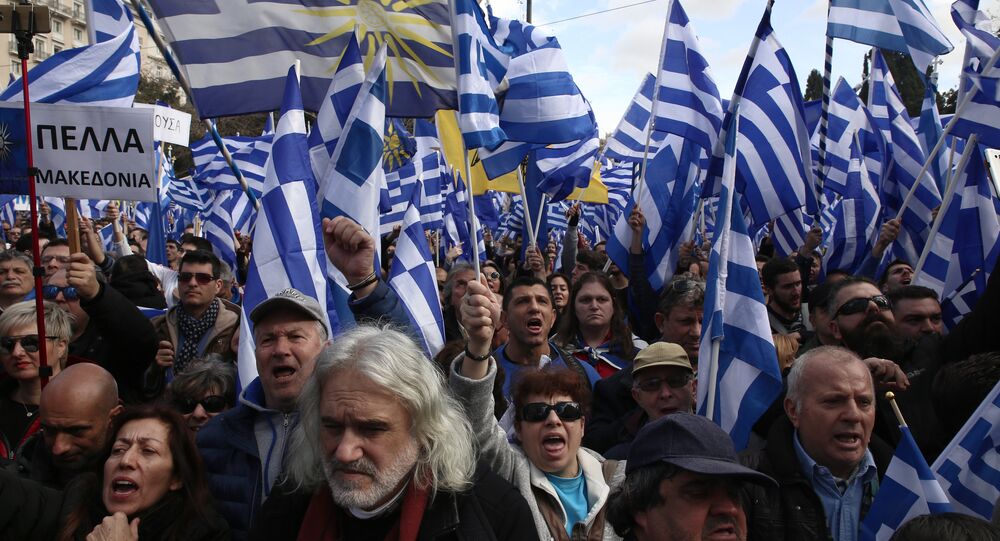 ATHENS (Sputnik) - About 60,000 people took part in a rally against the Greece-Macedonia name change deal at Syntagma Square in Athens, the Greek Police reported on Sunday.

"A rally of approximately 60,000 citizens is taking place in the area of Syntagma Square starting from 14 p.m. [12 p.m. GMT]. Attica's police department is taking increased security measures," the police said.

Organizers of the demonstration expected that at least 600,000 people would join it.

​The protest comes a week after the Macedonian parliament ratified a constitutional amendment to rename the country to the Republic of North Macedonia.

#Athens, #Greece NOW.
Thousands of people came from all over the country to protest against the #Prespes agreement. #Macedonia #Μακεδονια pic.twitter.com/pgghAoflVH

​The move was made as on June 17 the agreement between Greece and the former Yugoslav Republic of Macedonia (FYROM) was signed in the bordering town of Prespa in an attempt to solve their decades-long dispute over the name "Macedonia," with Greece objecting to its use because it was also the name of one of its regions. Under the deal, Macedonia changes its name to the Republic of North Macedonia.

Protests today in #Athens #Greece against #Macedonia name deal, Macedonia is ONE and ONLY Greek! 🇬🇷💙 pic.twitter.com/ibSs3d6B3f

​However, despite the fact that the ratification of the agreement would not only resolve the long-standing dispute but would also allow the renamed Macedonia to join the European Union and NATO, the Prespa deal has faced criticism both in Greece and Macedonia.

While some Greek politicians believe that the name "Macedonians" should be reserved exclusively for those who live in the Greek region of Macedonia, some in Skopje see the deal as a blow to the country's national identity.