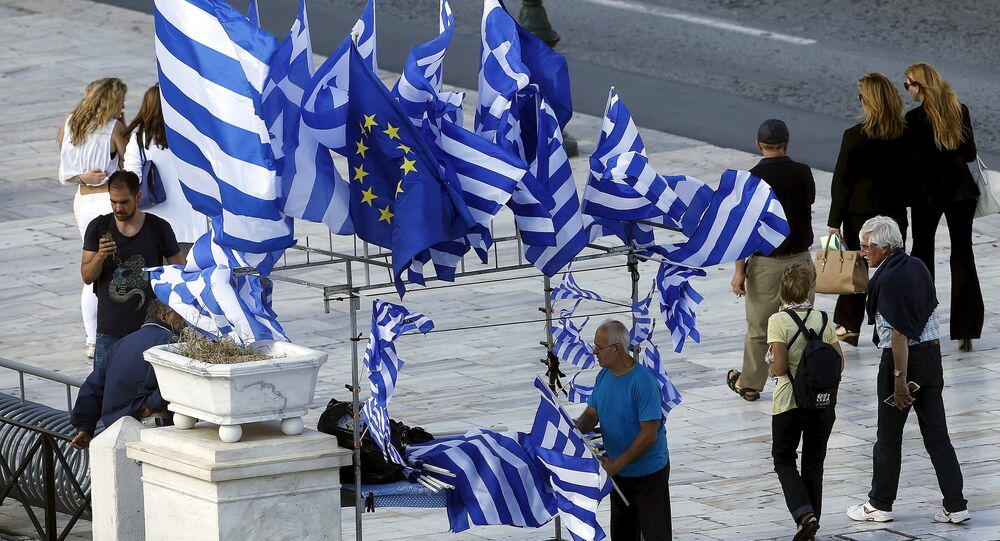 Greek Defence Minister Panos Kammenos has stepped down in protest at the Macedonia name deal, submitting his resignation to Prime Minister Alexis Tsipras on Sunday. The development was followed by the prime minister calling for a confidence vote for his government.

Sputnik рфы discussed the шыыгу with Dr Kyriakos Kouveliotis, director of the Hellenic Technological Pole of the International Telematic University UNINETTUNO and president of Atheneum Liberal Studies in Athens, Greece.

Sputnik: How will the confidence vote turn out, in your view?

Dr Kyriakos Kouveliotis: Well, it appears that the government so far has definitely the 151 votes that it needs to pass a confidence vote and otherwise the prime minister wouldn’t call it at all.

And this can be regarded as a package, let’s say, together with the ratification from the parliament of the agreement that you mentioned previously for the name of the Former Yugoslav Republic of Macedonia (FYROM) as North Macedonia.

© AP Photo / Boris Grdanoski
Macedonian Parl't Approves Country's Name Change to Republic of North Macedonia
So you have to consider these two votes as a unit. Actually, for the second vote, for the ratification of the name of North Macedonia, the government there probably has more votes than the 151 votes that it needs for the confidence vote. It would not be a surprise if this number goes up to 155, let’s say, out of the 300 seats in the parliament.

Sputnik: In case of an early vote, what changes would it entail for the Greek parliament?

Dr Kyriakos Kouveliotis: Well, an early vote is always possible, especially now that the parliamentary group of Independent Greeks has withdrawn its support for the current government, but I don’t see any reason why the prime minister has to call an early election, because if they are successful in achieving the 151 votes for the confidence [vote] and they successfully pass the ratification of the name of North Macedonia, then there is no need at all, regarding the current situation, to call for an early election.

If that happens, then we can probably talk of new political scene and don’t forget that we should have in mind that in May, we will also have the European elections, plus the Greek regional and municipal authorities’ elections.

So the last thing the government, the country wants now is to have this long pre-election period.

© AP Photo / Boris Grdanoski
US Uses Bribery, Blackmail to Interfere in Macedonia’s Affairs - Moscow
Sputnik: What is the feeling on the streets? Do Greeks approve of this agreement with Macedonia?

Dr Kyriakos Kouveliotis: Well, there are a lot of voices here that there should be a referendum regarding the approval of the name that the current government succeeded to pass with FYROM and nobody knows the exact percentage of this approval, but it appears that the majority of Greeks are against this agreement.

This has caused a lot of turmoil, although this is an issue that has been here for at least, I think, from the beginning of the 1990s. We should find a solution to close this burning issue. On the other hand, people are not happy with this agreement.

Sputnik: Greece’s economy is still shaky after years of fiscal austerity. How could these recent developments affect the nation economically?

Dr Kyriakos Kouveliotis: Well, let’s say that they are not helping actually and now there are more pressing issues, such as the country needs to seek funds from the markets abroad.

They should also continue the structural reforms that are necessary. There are also many geopolitical challenges in the region. There is also this debate over Europe and the south of Europe plus the tension with Turkey.

So these issues are not currently helping the economy at all. On the other hand, this is a transitional period, let’s say, because the government feels that if they put all this aside, then they can actually focus on the economy and the structural reforms.

Views and opinions expressed in this article are those of Dr Kyriakos Kouveliotis and do not necessarily reflect those of Sputnik.

Macedonia: Former Leader on the Lam