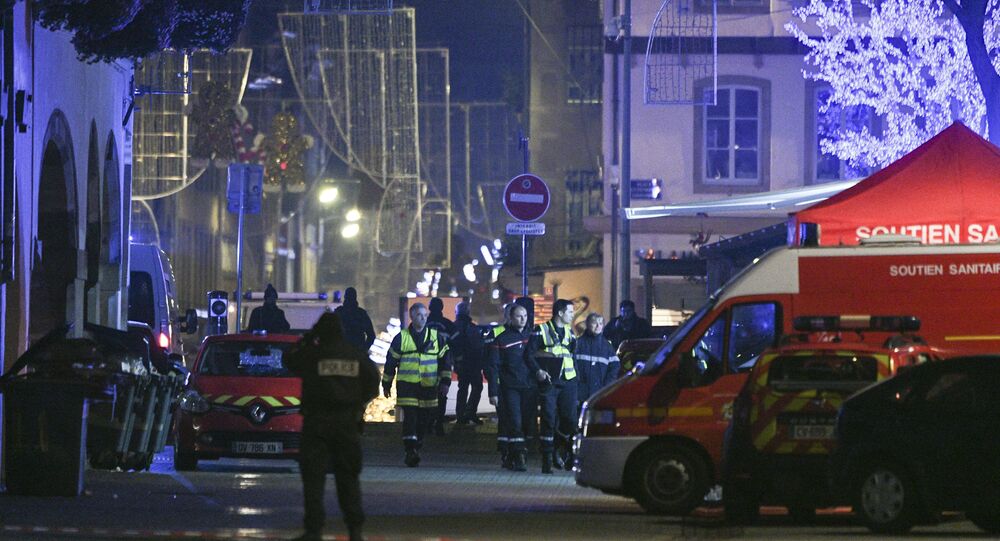 The man, who was identified as 29-year-old Cherif Chekatt, killed three people and wounded at least 13 others in a shooting near the Christmas Market in Strasbourg on 11 December.

French Interior Minister Christophe Castaner dismissed the claim by Daesh* that Cherif Chekatt, the Strasbourg Christmas Market shooter, was one of its "soldiers" as "completely opportunistic".

"The completely opportunistic claim by Daesh doesn't change anything. We're dealing with a man who was consumed by evil", the minister said as he visited the newly reopened Christmas market.

After the announcement of the killing of Cherif Chekatt on Thursday evening, BFM TV gathered a panel of pundits and journalists, having chosen a somewhat controversial musical background for the discussion.

READ MORE: Prof: What Happened in Strasbourg Suggests There Was Failure of Information

The show seemingly broadcast Bob Marley’s hit “I Shot the Sheriff”, thus playing on the name of the terrorist, shot dead in the Neudorf district of the city.

BFM TV hasn’t commented so far, but the “soundtrack” for the coverage has caused mixed feelings on social media…

TWEET: “Am I the only one to have heard ‘I Shot the Sheriff’ behind the footage of the killed terrorist on BFM TV?”

TWEET: “Surreal! ‘I shot the sheriff’ is playing in the background…”

TWEET: “For those who want the video clip, here it is. Bob Marley's ‘I shot the sheriff’ is clearly heard in the background, referring to the name of the terrorist, Cherif Chekkat. I do not know what to think about it.”

TWEET: “Did they really play ‘I shot the sheriff’ on BFM TV to talk about the shooter?”

A bit strange, but the French 24-hour rolling news channel BFMTV plays ‘I shot the Sheriff’ by Bob Marley in the background while announcing that the #Strasbourg terrorist attacker 'Cherif' Chekatt was shot dead by police. 🙃https://t.co/Bk6iJ6EORT

Several people, however, suggested that the sound was coming from the street, not from the national broadcaster:

TWEET: "Okay, apparently Bob Marley's track ‘I Shot The Sheriff’ was not played on the BFM panel but in the streets of Strasbourg where the footage was captured."

TWEET: “#Strasbourg: residents approach police officers in the Neudorf district and play Bob Marley's ‘I shot the Sheriff’ on their phones”.

On 11 December, Cherif Chekatt opened fire at the famous Christmas Market in Strasbourg, having killed three and wounding over a dozen others. France’s Interior Ministry announced that some 350 officers, supported by two helicopters, took part in the operation to track down the suspect, who managed to flee the crime scene.

READ MORE: Three Killed, Gunman on the Run: What We Know About Strasbourg Shooting

Previously convicted Chekatt was known to security services, and had been flagged by French intelligence agencies for violence and religious proselytism while in prison.