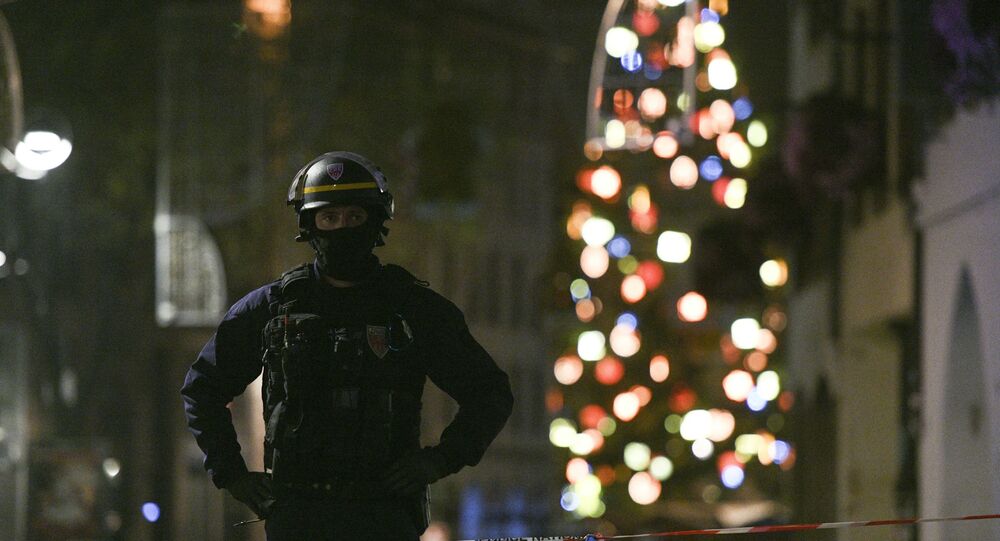 With the Strasbourg Terror attacker still on the loose; France is in lockdown in the aftermath of the violence. Sputnik spoke about it with Professor Helen Fenwick; terrorism expert at the University of Durham.

Helen Fenwick: I don't know whether I would say that in general, they've failed; they seem to have stopped some attacks, but obviously what happened in Strasbourg suggests that there was some kind of failure of information.

© AFP 2021 / Valery HACHE
Elite Unit of French Police Launched Op in Strasbourg (VIDEO)
Obviously; as you probably know, they went to arrest the person in question, not necessarily in relation to terrorism, but he wasn't there. Later on he actually mounted the attack, so yes I think in this case the intelligence services will have to look at exactly why he wasn't apprehended sooner, why he wasn't under stricter surveillance, whether there were any measures that they could've brought knowing that he'd already been radicalised in prison.

In this case; I think it's possible that there was a failure. Obviously; as we all know, the security services can't be mounting twenty-four-hour surveillance or using other measures against every single terrorism suspect they have, they have to downgrade or upgrade suspects all the time in terms of risk, because of lack of resources.

Nevertheless; in this case, given that he was known to be radicalised, known to be a member of an extremist group in Strasbourg, then it does seem as though there may have been intelligence failures.

Sputnik: Is terrorism more of a problem in France than the rest of Europe?

Helen Fenwick:  It seems to have yes; I think that that is possible. France has taken stronger measures and continued them longer than other countries in Europe, and it seems as though it's got a particular problem with certain groups that are operating in certain cities, which are to some extent known to the authorities.

It does seem to have a greater problem than a number of other countries in Europe, and it's the only country recently; aside from Turkey, to seek a delegation from the UN convention on human rights which has now ceased, but nevertheless, that was the response, not surprisingly to the Paris attacks.

There does appear to be some evidence that they are in a difficult situation regarding the threat situation.