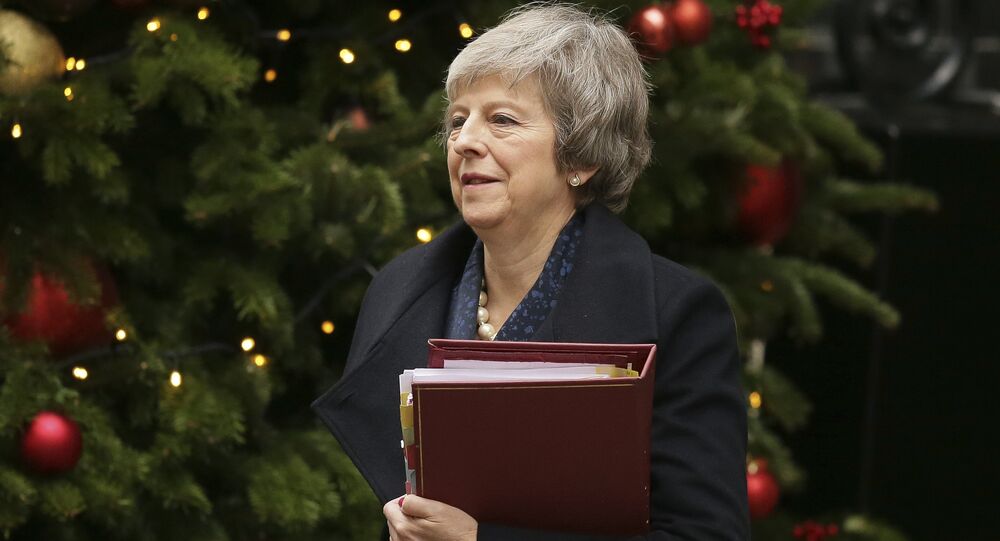 On Wednesday, 48 Conservative members of Parliament sent letters to the 1922 Committee, a group of rank-and-file MPs from the party who hold no government office, triggering a vote of no confidence in Prime Minister Theresa May.

In the British parliamentary system, a vote of confidence or no confidence is initiated by the government itself — May's own Conservative Party. The issue is settled by a simple majority vote, which is 158 members. While May survived Wednesday's vote, the motion leaves her authority severely weakened.

May received 200 votes in favor of her government and 117 against, Sir Graham Brady, who chairs the committee, said Wednesday evening. That's more votes that she received in the 2016 party leadership election, the Guardian reported.

As a result, no further vote of no confidence may be called for at least 12 months.

May became head of the British government in July 2016, during the chaotic reshuffling of government that saw David Cameron resign and May be appointed to replace him in the prime minister's office after the Brexit referendum passed June 23 and the country voted to leave the European Union.

May began to lose confidence in her government after a heated debate following the announcement last month of the results of her closed-door negotiations with EU leaders about the terms of the United Kingdom's departure from the bloc. A particularly sore point of contention was that Northern Ireland, which shares the island with EU-member Ireland, would effectively remain inside the bloc while the rest of the UK exited.

May tried to negotiate a position between those of "hard" and "soft" Brexits; or a complete departure from the EU versus a limited relationship with the bloc. Her primary concern was limiting freedom of movement in order to stem immigration from other parts of the EU into the UK. However, the mangled situation May negotiated has created a situation in which the UK will remain in the customs union, meaning its businesses, the directives that govern weights, measures, standards and other regulations will be decided by the European Union and are regulated by the European Court of Justice.

© CC0
'There’s No Majority for Any Brexit Deal' – Prof

With the so-called "soft" border between Ireland and Northern Ireland, a unilateral departure from the customs union by the UK becomes impossible.

"If we're going to remain indefinitely in a customs union… with the British economy effectively regulated by the EU, then what was the point of leaving?" journalist Alexander Mercouris, editor-in-chief of the Duran, told Sputnik in November following the announcement of May's Brexit deal.

On Monday, May cancelled an impending vote on the deal in the House of Commons that she was predicted to lose and returned to Brussels to try and hash out more favorable terms. EU leaders remained intransigent. Meanwhile, May's primary opposition, Labour Party leader Jeremy Corbyn, called her government "shambolic" in a fiery speech in the House of Commons Tuesday, calling on her to clear the way for more capable leaders if she couldn't handle the job.

Following announcement of the vote of confidence in May's government, Corbyn said in a statement that the vote makes no difference to the lives of British people and that May's Brexit deal must still face reckoning in Parliament.

The United Kingdom is slated to depart the European Union on March 29, 2019.