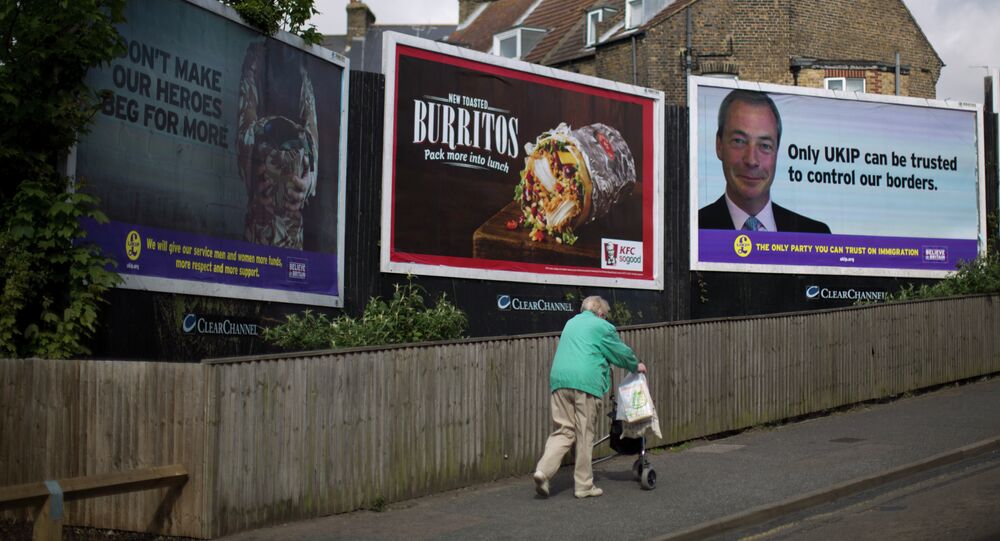 A senior Conservative Party official has been found given a suspended jail sentence for breaking election expenses rules in 2015 because she was convinced the "overwhelmingly important political objective" was to beat Nigel Farage.

On Wednesday, 9 January the jury returned after 53 hours of deliberation and cleared Craig Mackinlay, the MP for South Thanet, Kent of "knowingly making a false declaration on an election expenses return", contrary to the Representation of the People Act, which was passed in 1918.

He had always claimed he was innocent and is now free to resume his career as an MP and vote in next week's crucial Brexit debate.

But Marion Little, an election specialist at Conservative Party headquarters in London, was convicted of two counts of "intentionally encouraging or assisting an offence" in relation to the expenses returns.

Last month Mr. Mackinlay's election agent Nathan Gray was found not guilty of one count of knowingly using a false instrument "namely in respect of the election expenses return for the long campaign period".

The judge, Mr Justice Edis, said Little had presented falsified documents to Mr. Mackinlay and Mr. Gray for signing which "they did so in good faith not knowing what she had done."

"No-one can know whether her misconduct had any effect on the outcome of that election but she plainly intended that it would," he added.

In March 2017 the Conservative Party was fined £70,000 by the Electoral Commission for various breaches of the law regarding spending at the 2015 General Election but two months later the Crown Prosecution Service said nobody would be prosecuted in relation to those breaches.

Those allegations — which involved £104,765 of missing payments, £118,124 of unreported or mistakenly reported expenses and £52,924 which lacked supporting invoices — surrounded the use of battle buses and teams of volunteers who were sent into key marginals to help the locals with canvassing, the hard work of knocking on individual voters' doors and persuading them to vote for a candidate.

Friction Between Local and National Tories

Those same battle buses were mentioned in Mr. Mackinlay's trial, where he criticised their visits as a "complete waste of time."

Anna Soubry, another Tory MP and devout Remainer, told the trial she too had been questioned by police about "fiddling" expenses in relation to battle bus visits to her Nottinghamshire constituency.

Mrs. Soubry said "nothing whatsoever" came of the police investigation.

"And rightly so, because we hadn't done anything wrong," she added.

She said she had agreed to let CCHQ sent the battle bus to her constituency as it would "shut them up".

Under the Political Parties, Elections and Referendums Act 2000 it is the responsibility of a political party's registered treasurer to ensure that an accurate and complete campaign spending return is submitted to the Electoral Commission by the statutory deadline following national elections.

The Tory party treasurer at the time of the 2015 General Election, was James Lupton, a former Deputy Chairman of Baring Brothers, a merchant bank which collapsed in 1995.

Six months after the 2015 election, Mr Lupton was rewarded with a peerage by the then Prime Minister David Cameron.

Sir James' position was later taken by Sir Mick Davis, a South African-born businessman, who was recently replaced by Ehug Sheleg, an Israeli-born tycoon who donated £500,000 to the party in 2017.

So what does the law say about the funding of election campaigns?

Complex Rules About How Much Can be Spent

There are limits on how much a party can spend on campaigning at certain elections.

Blimey. Lord Stephen Gilbert, whose name crops up in some of the election expenses stories we’ve done on C4 News, has been appointed to the Electoral Commission

In Mr. Mackinlay's case he was limited to a personal spend of £52,000 at the May 2015 election, where he was struggling to defend the seat against UKIP's Nigel Farage, who was riding the crest of a wave of popularity.

Mr. Mackinlay's trial at Southwark Crown Court in London heard a great deal of information about the involvement of CCHQ — Conservative Central Headquarters — which had South Thanet at the top of their list of 40 key marginals they were defending.

"Candidate election expenses are to be distinguished from a political party's national election expenses…In broad terms party political spending is spending incurred to promote a political party nationally, for example the cost involved in printing and distributing Vote Conservative leaflets which may contain a party political national message such as ‘Vote Conservative for a better stronger future.' This is an important distinction of some relevance in this case," prosecutor Aftab Jafferjee QC told the jury.

"This was a very important seat to the Conservative Party. In seeking to ensure the success of the party's candidate and defeat of Nigel Farage, proper regard to the limits on expenditure imposed by law was sacrificed," Mr Jafferjee said.

Mr Jafferjee claimed Mr. Mackinlay exceeded his spending limit by up to £66,000 and he said this was partly by omitting to mention certain expenses and partly by them being accepted by CCHQ as national spending, rather than local expenditure.

Hotel accommodation for activists and party workers, meals, posters and other costs had been recorded as national, not local expenses, claimed Mr. Jafferjee.

The Tories' press officer, Henry Macrory, was booked into a hotel in South Thanet, for the election campaign, as was Mrs. Little, who was "effectively managing Mr. Mackinlay's campaign", said Mr Jafferjee, who said both should have been put down on Mr. Mackinlay's expenses, not the party nationally.

Was Marion Little Working For Craig Mackinlay or National Party?

Mr Jafferjee said Mrs Little's salary was £52,000 and because she was working for Mr Mackinlay for four weeks, he should have declared her monthly salary — around £4,000 — as one of his expenses.

"Marion Little…told police that she was not working for Craig Mackinlay but carrying out national campaigning work and was only occasionally helping him out in her spare time.  Since then, there has been an arguably significant adjustment to that initial position. She now contends in terms that she came to Kent to prevent the election of UKIP and its Party leader Nigel Farage, and the benefit to Craig Mackinlay was collateral to that aim. Put another way, she appears to be saying ‘we were not in South Thanet with a view to or in connection with promoting or procuring Craig Mackinlay's election. We were only there to defeat UKIP," Mr. Jafferjee told the jury.

Mrs. Little was given a nine month jail sentence, suspended because her husband is terminally ill.

The judge said she was "carried away by her conviction" that defeating Mr Farage was an "overwhelmingly important political objective".

"The Conservative Party put extra resources into this constituency. CCHQ were particularly concerned that Craig Mackinlay should be elected in South Thanet in 2015, because the UKIP candidate in that constituency was Nigel Farage, the then UKIP party leader. In those pre-referendum days UKIP were on the rise and the threat perceived by the Conservative Party to their share of the vote only intensified in the lead up to the 2015 election," Mr. Jafferjee told the jury.

"When Nigel Farage announced that he would step down as leader of UKIP if he failed to win the South Thanet seat it was clear that this was not going to be any ordinary election campaign. In the event, it became a two-horse race. Following what Nathan Gray later described to Marion Little as a ‘truly magnificent' election campaign Craig Mackinlay won the seat with a majority of some 2,800 votes, from an electorate of just over 70,000," Mr. Jafferjee said.

The amount of local spend depends on the constituency but an Electoral Commission spokesman told Sputnik the maximum a political party could spend nationally — if it posted candidates in all 650 constituencies — was £19.5 milion.

To make matters even more complicated, the election period itself is divided into the "long campaign" and the "short campaign", the latter being the four-week period just before the election.

For the long campaign the South Thanet maximum was £37,016 and Mackinlay only declared £32,661, comfortably within the limit.

"The limits seek to ensure integrity and public confidence in the most obvious example of this country's democratic process, namely a General Election. It is the responsibility of every candidate and election agent, to ensure they are scrupulously observed," Mr. Jafferjee explained to the jury.

The trial also heard about an email sent by Tony Salter, the chairman of South Thanet Tories to  Conservative Central Office (CCO) in February 2015.

"If CCO insist on going ahead with the survey (of voters' attitudes) against the wishes of the Campaign team in South Thanet at an astonishing cost of £7,200 there's a real danger of going over the legal limit for the Long campaign…At the very least I would urge nothing more be done about the survey until you have discussed the situation with a full campaign team and we have worked through the budget. The consequences of CCO going ahead unilaterally in the circumstances could be disastrous for all concerned," Mr. Salter warned.