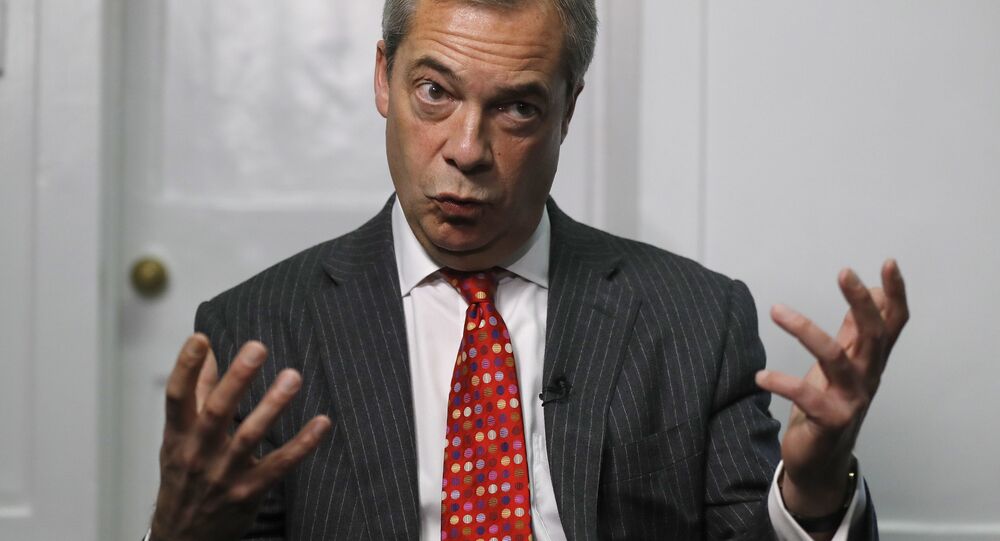 Conservative MP Craig Mackinlay is on trial for making false returns on his expenses at the 2015 General Election. A Sputnik reporter was in court when a senior Conservative Party denied she was running his campaign because he was up against UKIP leader Nigel Farage.

Mackinlay denies two counts of making a false election expenses declaration under the Representation of the People Act 1983.

On Tuesday, November 13, Mrs. Little gave evidence at Southwark Crown Court about her role in the 2015 election campaign.

She said she was a "campaign specialist" who was brought in to assist the candidate and his election agent, Nathan Gray, who is also on trial.

How a cauliflower featured in Conservative campaign in South Thanet in 2015: https://t.co/7qYogW9Dla

Mrs. Little said during the 2015 election the Conservative Party, then led by David Cameron, was running a 40/40 campaign, defending 40 key seats and trying to win an extra 40 seats.

She said South Thanet in Kent was one of the 40 seats the party was defending.
'Two-Horse Race' in South Thanet

Mrs. Little said it was a "two-horse race" between the Conservatives and UKIP and a large number of Cabinet ministers and political celebrities, including Boris Johnson, Michael Gove, William Hague, Liz Truss and Iain Duncan-Smith, were brought down to South Thanet to campaign for Mr. Mackinlay.

In the end Mr Mackinlay defeated Mr. Farage by 2,500 votes to retain the seat after his predecessor Laura Sandys stood down. She was asked who was responsible for the wording of campaign leaflets which aimed to encourage "soft Conservatives" to stick with the party, rather than defecting to vote UKIP.Election agent to South Thanet MP Craig Mackinlay nearly considered quitting role, court told: https://t.co/es9c0Ly3OW

Mrs. Little said Nick Timothy — a key Tory party strategist who quit after the 2017 election — was responsible for most of the wording, which mentioned the national picture and said there was a danger of Labour's then leader Ed Miliband becoming prime minister on the back of a deal with the SNP's Nicola Sturgeon and also mentioned Mr. Farage had said he was willing to "do a deal" with Mr. Miliband if he became an MP.

"The 250 words at the top were from the candidate and they changed from constituency to constituency. Most of that literature is a national message but a small part is the local candidate so tried to apportion it," she explained.

Trawling For Votes in 'Bungalow Land'

Mrs. Little gave evidence about how her team tried to win "Christian votes" for Mr. Mackinlay and also said a former UKIP councillor, a defector Lesley Game, was brought to canvas in "bungalow land", an area of the constituency which was "full of pensioners" who were wavering between voting Conservative and UKIP.

Her barrister, Jim Sturman, QC, led her through her diary for the 2015 election campaign and asked her about the relationship between the candidate, local volunteers and staff from the Conservative Party national head office, including herself.

She was asked about a number of items of expenditure — including meals, hotel accommodation and leaflets — and said they all came under the national campaign, known as Team 2015, rather than Mr Mackinlay's local campaign.

"Did you deliberately leave off the costs of hotel accommodation to take you under spending limit for Craig Mackinlay?" asked James Sturman.

The UKIP leader Nigel Farage had decided South Thanet would be the constituency he would  target in his bid to become an MP.

Mr. Mackinlay gave evidence last month that the party threw everything at the seat because of the "fear of Farage".

But he denied he and Mr. Grey declared false returns which were below the £52,000 limit imposed on MPs.

Prosecutor Aftab Jafferjee, QC, has claimed £66,000 worth of expenses were either declared as national campaigning or not declared at all, when they should have been declared on Mr. Mackinlay's returns.

Friction Between National and Local Tories

Mrs. Little admitted there was friction between the Conservatives' Head Office team and the locals in South Thanet, who were mainly volunteers.

She said the locals felts snubbed when Tory grandees were brought down and Mrs. Little and her team took over the organisation of their visits.

Mrs. Little admitted the locals were particularly perturbed when Boris Johnson, who was then the Mayor of London, was brought to South Thanet because they felt local party members did not get the chance to meet him.

FROM EARLIER: A court's heard how high-profile Conservatives like Boris Johnson were drafted in to help #Kent MP Craig Mackinlay win his seat in the 2015 general election. All three of the people charged deny any wrongdoing #kmfmnews https://t.co/2bRmhzl5JT pic.twitter.com/9QgFkDXbvT

She was also involved in organising a number of visits by Cabinet ministers, including one by Health Secretary Jeremy Hunt, which was cancelled at the last minute.

Mrs. Little said several of the ministers had close protection officers from the police who were there to oversee their security and she said locals, including Mr. Gray, were deliberately excluded from briefings because "the fewer people involved the better".