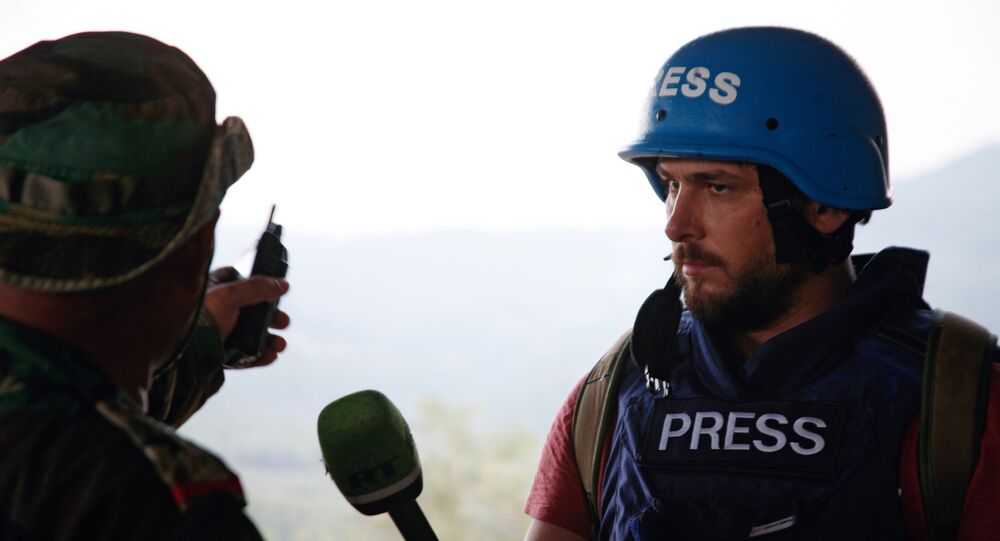 LISBON (Sputnik) – RT journalists’ work in conflict zones showed to the whole world that they are true correspondents, not propagandists as they are portrayed by the Western countries, Russian Foreign Ministry’s spokeswoman Maria Zakharova told RT on Saturday.

“I am not sure that Russia Today [RT] has no things to improve … Of course, nobody is perfect, as we know. I think what you are doing and what you were doing for several last years in different parts of the world finally proved to the world that you are correspondents. And of course, you should move that way and you should be in the places and in the situations when people need not only alternative information, bust just basic information,” Zakharova said.

© Sputnik / Iliya Pitalev
RT Chief Editor Promises Help to Amputee Boy From Award-Winning Photo
The spokeswoman pointed out that RT correspondents were working in the conflict zones such as the eastern Ukrainian region of Donbas and the Syrian province of Idlib, where most Western media are not present.

“How many people from France and French media are working, for example, in Aleppo, or in Idlib? This is the answer to the question, who are and who are not propaganda journalists,” Zakharova added.

Last year, RT reporters were denied entry to the headquarters of then-French presidential candidate Emmanuel Macron twice in April, and next month, a Sputnik reporter was not allowed to enter the square in front of Paris' Louvre museum where Macron and his supporters were celebrating the victory in the presidential run-off. After Macron became French president, he accused RT and Sputnik of “spreading false information and slander.”

Sputnik and RT's editor-in-chief Margarita Simonyan repeatedly stressed that not a single example of spreading misinformation by the Russian media was provided by Macron's team.

© Sputnik / Evgeny Biyatov
RT Being Forced Off Cable Channel in Washington, DC Area
The situation around RT and Sputnik in France is not unique for the European Union: in 2016, the European Parliament adopted a resolution claiming that Russia was waging information warfare and singled out RT and Sputnik. Russian President Vladimir Putin said the resolution proved that Western democracy was failing, but expressed hope that the common sense would prevail and Russian media outlets would be able to work abroad without restrictions.

Earlier in November, the Elysee Palace decided to issue accreditation to journalists from RT France and Sputnik after more than a year-long denial to do that.