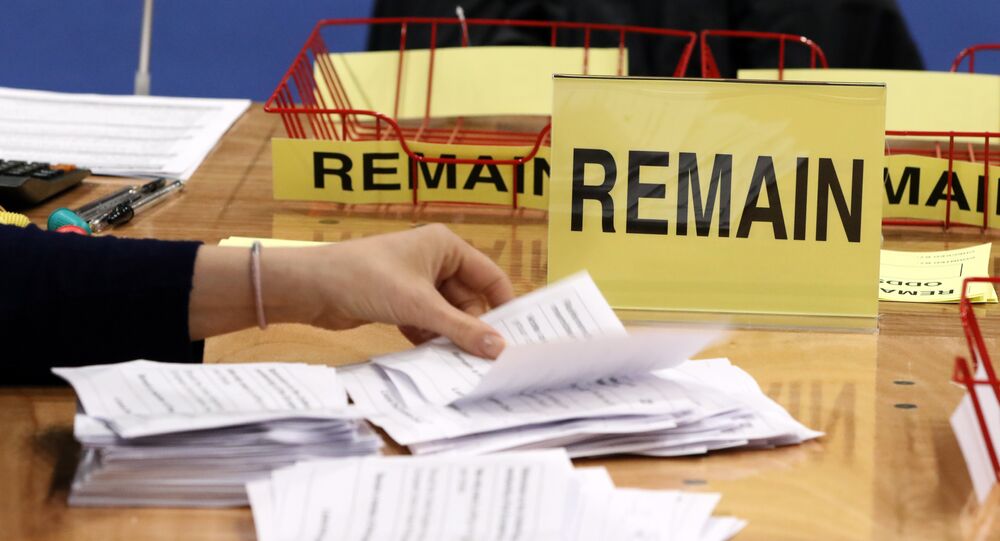 Labour "can't ride all the horses all of the time" and must change its policy from keeping all options open, general secretary of the Transport Salaried Staffs' Association (TSSA) Manuel Cortes said.

Mr. Cortes urged UK Labour leader Jeremy Corbyn to present a plan for a post-Brexit Britain, but said that the opposition leader must not compromise on his stance. His message comes hours after Croydon North MP and former culture minister Steve Reed said that new elections could not happen due to current parliamentary circumstances.

© REUTERS / Stefan Wermuth
UK Shouldn’t Go Into No-Deal Scenario Without Another Referendum – Researcher
Labour will advocate a general election if the House of Commons votes to reject UK prime minister Theresa May's Brexit draft deal, and may opt for a second referendum as a contingency.

"Jeremy's position of remain and reform is as right today as it was back in 2016 — it's why a general election is necessary," he wrote in a column in the Huffington Post.

"But I no more trust the Tories to give in gracefully before 2022 than I trust them to deliver a jobs-first Brexit. Labour's current policy is that once May's rotten deal is sunk, all options remain on table."

"This stance is for now holding us in good stead but we can't ride all the horses all of the time," he continued. "It's why I believe Labour should convene an emergency Labour Party conference as soon as May's deal is sunk so we can democratically decide which of the options on the table we should take."

The TSSA union chief said that Labour should "plant the [referendum] grenade" as well as the possibility of casting a ballot to remain in the single European market and customs union, adding that Corbyn should consider a "no Brexit at all" amendment to the draft deal if Parliament rejects Mrs. May's agreement.

"Cabinet is split, Parliament is deadlocked, and a snap election is not possible under the Fixed Term Parliaments Act without Tory support," Mr. Reed said. "In these circumstances, we must let the people take back control of Brexit and decide our country's future through a People's Vote."

"We will seek to defeat the Government's deal. The best outcome, if it is defeated, is a general election," a spokesperson for Mr. Corbyn said, adding that "If that's not achievable all options are on the table including the option of a public vote".

"That is our policy, and obviously the discussion about what he said and the consequences of that will take place."

Without Deselections, Corbyn Project Will Fail