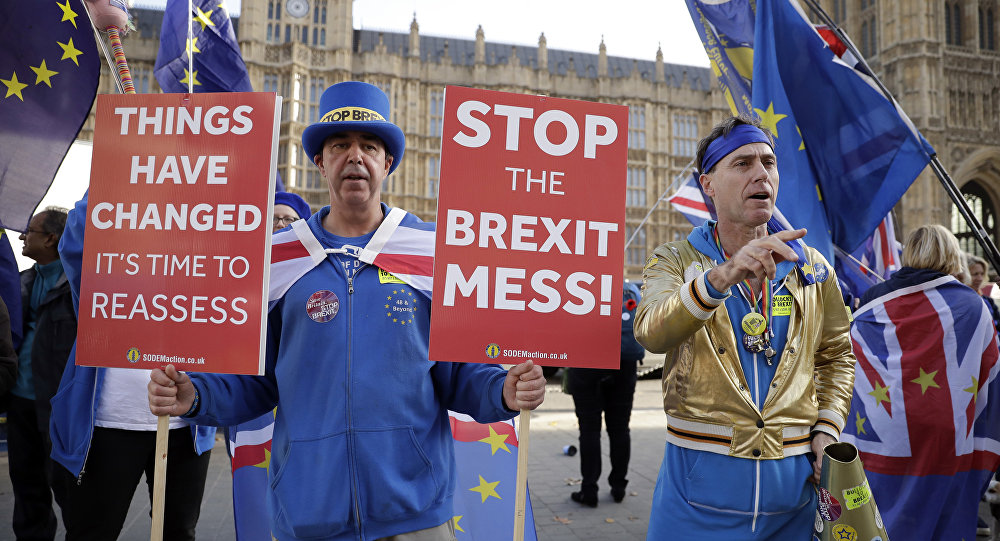 Dominic Raab has resigned as Brexit Secretary after UK Prime Minister Theresa May forced her latest Brexit deal through the Cabinet. Sputnik looks at what is in the 585-page document that is so controversial.

After marathon negotiations in Brussels, Mrs. May put the deal to the Cabinet on Thursday, November 14, and approved after a "long, detailed and impassioned debate".

But leading Brexiteer Jacob Rees-Mogg described it as a "rotten deal" and on Friday, November 15, the Brexit Secretary himself Dominic Raab resigned, followed by Work and Pensions Secretary Esther McVey.

So what's in it that has got them so upset?

If May loses three Cabinet ministers this morning then is it credible to think she can keep her deal, and keep her job?

​Expat Rights in Europe and UK

One of the biggest worries after the Brexit referendum vote in 2016 was what would happen to EU citizens in the UK and British citizens on the continent.

Thousands of Poles, Romanians and Bulgarians have returned home in the last two years amid uncertainty over their futures in Britain and many Britons in Spain and France decided to sell up too.

Earlier this morning I informed the Prime Minister I was resigning from her Cabinet pic.twitter.com/ZeBkL5n2xH

Although immigration was a major issue during the referendum campaign the final deal on citizens' rights has not been a big issues for the Brexiteers as it will still stop new migrants coming to the UK from EU, unless they have been granted a work visa to work in the NHS, for example.

The deal also includes details of how much Britain has to pay the EU to sever ties, thought to be in the region of £39 billion.

That sum includes UK's contribution to EU annual budgets up until 2020, the payment of outstanding commitments and other liabilities up until 2020.

Although they may grumble about it, this too has not been a major issue for the Brexiteers, who have accepted there was a financial downside to leaving the EU, although they believe it is outweighed by the freedom of being unshackled from the EU's control.

It soon became clear during the talks that the biggest sticking point was the border between the Republic of Ireland and Northern Ireland.

The border only came into existence in 1922 when the Irish Free State came into being.

After years of violence and unrest in the south of Ireland, the British Empire finally agreed to let the mainly Catholic Irish become independent but the largely Protestant six counties of Ulster were to remain within the UK.

The Irish Free State became the Republic of Ireland in 1949 and 20 years later unrest broke out in the north as Catholics demanded an end to discrimination over jobs and housing.

The Irish Republican Army (IRA) declared war on the British state and tried to force a united Ireland.

The Troubles ended in 1998, with the signing of the Good Friday Agreement and easy travel across the border has been key to keeping the peace in Ulster.

The UK government, under pressure from their allies the Democratic Unionist Party (DUP), refused to accept a "hard border" between Northern Ireland and the Republic, which would have badly damaged trade in Ulster.

The EU suggested keeping the open border but adding checks at ports and airports crossing the Irish Sea between Northern Ireland and England, Scotland and Wales.

This enraged the DUP.

The EU wanted a "backstop" agreement to cover the period between March 29, 2019 — when Britain formally leaves the union — and December 2020, the end of the transition period.

For months David Davis and his successor as Brexit Secretary Dominic Raab has been rejecteding the EU's proposed backstop, which would have kept Northern Ireland in the customs union and the single market but introduced checks in the Irish Sea.

Raab suggested the whole of the UK should stay in a de facto customs union with the EU.

Eventually both made concessions and came to an agreement.

The EU's chief negotiator, Michel Barnier, accepted the whole of the UK would remain in a customs union with the EU while the Conservative government agreed to accept special "deeper" customs arrangements for Northern Ireland.

This was anathema to the DUP, who are now threatening to pull the plug from their Tory coalition allies.

Strong words from Ulster Unionist MLA Steve Aiken, blasting the DUP has having been a “disaster for Northern Ireland” and urging DUP members to reflect pic.twitter.com/2hBCZo5LNd

This was a red rag to the Tory Brexiteer bulls.

The prospect of having to continue to accept EU regulations prompted Boris Johnson to dismiss the deal as "vassal state stuff."

The agreement includes a non-binding seven page declaration about what the two sides their future trading relationship, although all the details still have to be negotiated.

"If Britain remains in the customs union, we must be sure that Britain respects all European rules including fiscal rules and environmental norms," said French government spokesman Benjamin Griveaux.

The reason this part of the agreement is so short could be because the backstop agreement will keep Britain effectively in a customs union and a single market, something which has enraged many Tories.

"No democratic nation has ever signed up to be bound by such an extensive regime, imposed externally without any democratic control over the laws to be applied, nor the ability to decide to exit the arrangement. That arrangement is now also taken as the starting point for negotiating the Future Economic Partnership. If we accept that, it will severely prejudice the second phase of negotiations against the UK," said Dominic Raab, in his resignation letter.