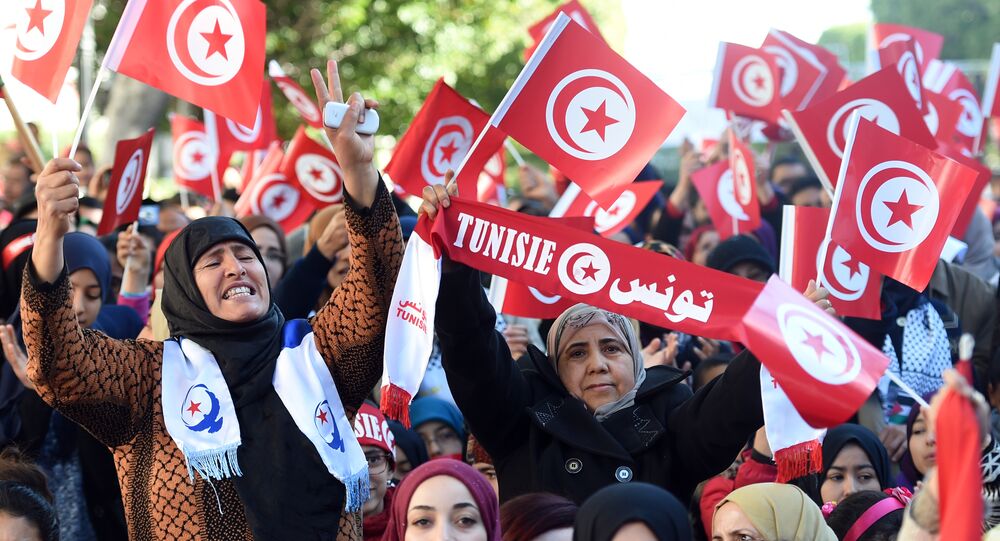 This week, Italian Interior Minister Matteo Salvini traveled to Tunis, where he appealed to local authorities to step up their efforts to block illicit migration flow and asking Tunisians who are in Italy illegally to return to their home country.

With Paris and Rome focusing most of their migration-related attention on Syria and Sub-Saharan Africa in recent years, there's another illegal migration hotspot which may soon result in hundreds of thousands of young people trying to make their way to Europe, this time from Tunisia.

In a piece in France's Liberation, Laura-Mai Gaveriaux, a writer who has worked in Tunisia for several years, suggested that Salvini's visit to the North African country on Thursday was timely amid a growing desire by much of the country's youth to leave Tunisia in search of a better life in Europe.

© Sputnik / Natalia Seliverstova
Tunisian President Urges PM to Pick Between Resigning, Confidence Vote
Gaveriaux recalled that in 2011, shortly after the Arab Spring toppled Tunisia's government, Italian Prime Minister Silvio Berlusconi traveled to Tunis to work out a deal to stop what he called the "human tsunami phenomenon" of migration from the country, leading to an agreement under which Tunis would strengthen control of its territorial waters, in exchange for limited work permit assistance from Rome.

Seven years later, the journalist noted, all of the issues which helped lead to the collapse of the Ben Ali government in 2011, including corruption, youth unemployment, stalled administrative and institutional reforms continue to persist.

During Thursday's visit, Matteo Salvini reported that since the beginning of 2018, some 4,487 illegal migrants had arrived to Italy from Tunisia, along with 6,092 in 2017. Tunis reported that it had detained over 8,400 would-be migrants, including 700 individuals suspected of organizing or facilitating dangerous crossings across the Mediterranean.

Gaveriaux lamented that lately, she has not met "a single young person under 30" in Tunisia who did not dream of leaving. "The phenomenon now affects whole families," single and even pregnant women, the journalist wrote. Groups of Tunisians chip in to buy (or steal) small boats, engines, and life jackets and head to the sea, using iPhones as navigation systems. Neither warnings from elders, nor from sailors, nor sordid stories from life at Italy's migrant distribution centers or the growing xenophobia toward migrants in France can dissuade them, she added.

"Tunisian illegal immigration is a time bomb that France will not be able to close its eyes on for long," Gaveriaux warned. Paris, she recalled, played a major role in the outcome of the Tunisian revolution in 2011, first in toppling Ben Ali and then by choosing its interlocutors "at the whim of its own interests" instead of those of Tunisians.

© REUTERS / Stringer
EU May Provide Funds to Morocco, Tunisia to Stop Migrant Flow to Spain – Source
Ultimately, the journalist suggested that the 21st century is quickly becoming the "century of migration," with little able to stop people from the third world from dreaming of coming to Europe in search of a better future. Only a worthy political solution by European powers can stem the tide, Gaveriaux concluded.

During his joint press conference with his Tunisian counterpart on Thursday, Salvini said Italy's priority was "to block the hundreds of thousands of uncontrolled arrivals that we have received these last three years." Rome, he noted, was "working with the Tunisian authorities to…escort [back] to Tunisia those who came from Tunisia."

Salvini also pledged additional Italian investment in the country, particularly in southern Tunisia, where most of Tunisia's migrants come from. Italy, the minister stressed, is looking to become the North African country's number one commercial, economic, cultural and tourism partner.