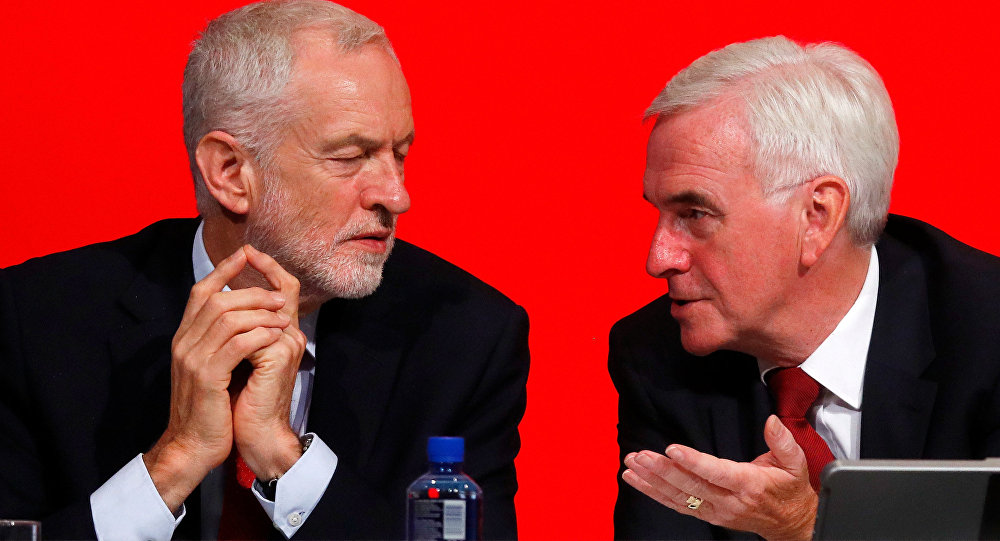 On the second day of the Labour conference in Liverpool, members of the biggest opposition party in Britain heard their finance spokesman say it is time to shift balance of power in the UK.

The Shadow Chancellor of the Exchequer, John McDonnell, said that June 23 Brexit referendum was an anti-establishment vote. On the future of the negotiations and the second referendum — on the Brexit deal itself — Mr. McDonnell said:

"I just say to the Tories, in the interests of our country get out of the way and let us get on with securing a way forward. A way forward that will protect our economy, our jobs and standards of living for our people. If they won't do that then, you know my preference, let's have a general election. We are keeping all the options for democratic engagement on the table. But look, I feel so strongly that these Tories should face the people. Face the people for the way they have recklessly put our country's future at risk over the last two years, more interested in fighting each other than fighting for this country."

Labour and its leader have been criticized for dishonoring the vote of the British people in their willing to hold a second referendum.

EU Leaders are not on the side of the British people. Their aim is simple. To reverse the result of the Referendum and put Brussels back in charge. https://t.co/HyWE3CRwGu

If Labour bows to middle class liberal elites' demands for a second referendum (because they're the only ones who want one), they thereby insult the millions of Labour voters who knew exactly what they voted for in June 2016. And almost guarantee they lose the next election-IMHO pic.twitter.com/3QmHc91ka7

There are 5 million Labour Brexit voters out there, if the party backs a second referendum it will make them less electable. pic.twitter.com/eArVlmrZrb

At the same time, public and political discontent has been building up at the failure of the Tory Cabinet to secure a divorce deal with their counterparts in Europe.

READ MORE: 'It's Like the Suez Crisis': Ministers Warn Hard Brexit May Break Up UK

Rumors of a potential snap election in Britain, given the PM Theresa May's inability to lock a deal with Brussels, have recently surfaced and were met by Labour with stern determination.

"Yesterday the press reported the Tories were drawing up secret plans for a quick general election. So the message from this conference is bring it on. Whenever the general election comes, we are ready. Ready to campaign for victory, ready for Government, ready to build the future," John McDonnell told Labour MPs and supporters on Monday.

The Shadow Chancellor has also criticized the Conservative government for "8 heard years of austerity and economic failure" and laid out an economic plan to tackle the great "mess" left by the Tories.

Labour would legislate a new scheme to give workers a share of company dividends that was dismissed by big business and would renationalize water, rail, energy and mail services within five years, he explained.

"People have just had enough of being ripped off by privatization," the politician said, adding a promise of a "true industrial democracy" under Labour.

Cracking down on tax avoidance and money laundering, a prominent issue plaguing British economy, McDonell promised a push for business to sign up to the Fair Tax Mark standards, "demonstrating transparently that they pay their fair share of taxes."

"So the warning to the tax avoiders: the game is over. Over," he stressed.

The Labour conference kicked off on September 23 and will finish on Wednesday when the leader Jeremy Corbyn is scheduled to deliver his address to the party.