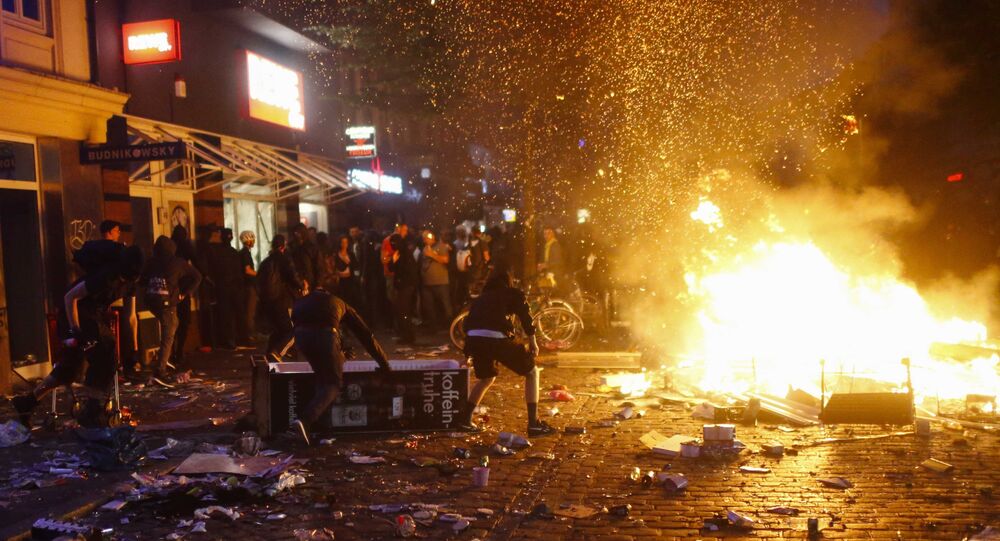 So-called “black bloc” suspects in a criminal case, launched after a number of Hamburg city quarters were severely damaged during multiple street protests against the 2017 G20 gathering, are assumed to have arrived in Germany from neighboring European countries.

Hamburg police have launched a sweeping Europe-wide manhunt for four suspects allegedly involved in riots at the time the northern German city hosted the G20 summit, in July 2017, according to The Deutsche Welle. Photographs featuring three men and a woman have been sent out across the country, with the police urging anyone aware of the individuals’ whereabouts to contact them.

The persons are suspected of carrying out a number of arson attacks on Elbchaussee Street in Hamburg during the so-called “Welcome to Hell” demonstration on July 6, which the caused damages estimated at 1.5 million euros.

In the course of the protests on July 6 and 7, 2017, several hundred left-wing activists were reported to have created a “black bloc,” clashing with the police on a city thoroughfare and subsequently near the Schanzenviertel Quarter, the historic fortifications outside the city that protected Hamburg from the Danes in 1686.

Addressing the issue, Jan Hieber, head of a special commission on the case, said that "these are the top culprits of the G20 riots," adding that those involved were not demonstrating under their right of assembly, but carrying out a “commando operation that was meant to spread fear and terror."

The four are also accused of crimes including the disruption of peace, resisting and assaulting police officers as well as is alleged to have inflicted bodily harm on law enforcement personnel by throwing bottles and stones at officers. They also supposedly looted supermarkets and erected barricades before subsequently burning them.

The four suspects, who are thought to have possibly arrived from abroad, will now be searched for across a vast number of European countries, namely Austria, the Netherlands, Belgium, Denmark, Sweden, Finland and Greece.

In Germany, police have so far detained 585 suspects, with 41 of them identified, Germany's Focus news magazine quoted Hieber as saying.

© AP Photo / Georg Wendt/dpa
Journalists look at manhunt profiles after a news conference in Hamburg, Germany, Monday, Dec. 18, 2017. With photos and videos in the internet, police searches for suspected militant activists and looters of the G20 summit in summer 2017

Hamburg witnessed three nights of violence amid anti-globalization protests as leaders of the world's major economic powers met on July 7-8, with about four million euros attributable to damaged vehicles alone, while the total property damage incurred during the leftist riots approximated about 12 million euros.