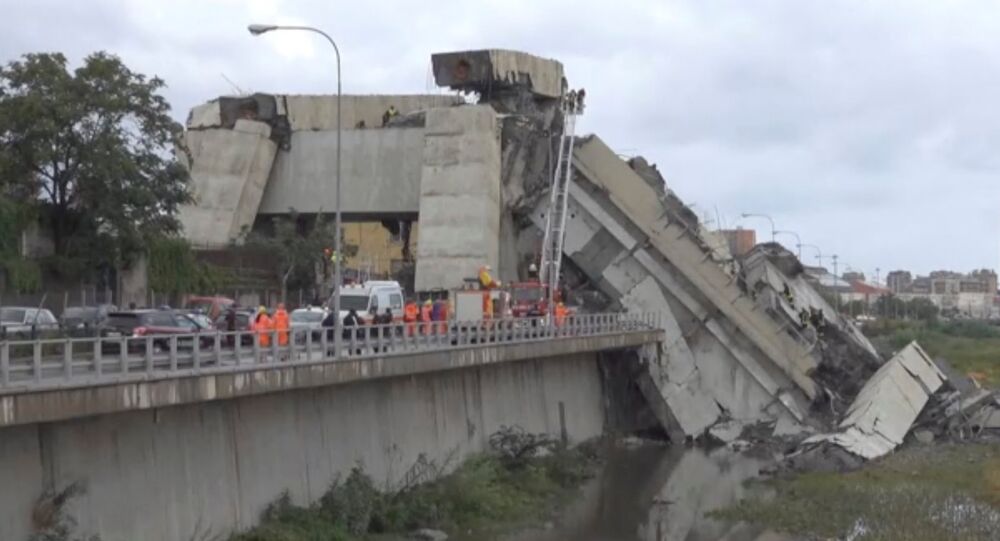 According to previous reports, the bridge that collapsed in the Italian city of Genoa, claiming the lives of at least 38 people was temporarily closed two years ago and needed "extraordinary maintenance work."

According to the head of Genoa's public prosecutor's office, Francesco Cozzi, human error caused the fatal incident. He stated that after the rescue operations, investigators would analyze "all aspects related to the development, engineering and maintenance of the bridge" in order to understand what had happened. Cozzi added that he was ready to open the case "for negligent multiple homicide and disaster".

This statement echoed the words of Deputy prime minister Luigi Di Maio, who had stated that the tragedy "could have been avoided."

Later on Wednesday Italian firefighters warned that another section of the bridge may collapse soon.

Earlier in the day, Italian transport minister Danilo Toninelli announced that the government had begun revoking motorway concessions after the bridge collapse in Genoa, adding that it would also seek to impose "significant fines" on the company Autostrade per l'Italia, Atlantia SpA unit managing that stretch of the highway.

"The top management of Autostrade per l'Italia must resign first of all. And given that there have been serious damages, I announce that we have activated all the procedures for the possible revocation of concessions, and to impose fines of up to 150 million euros. If they cannot manage our motorways, the state will do it," Toninelli said on his Facebook page.

He also stated that the experts would do a safety audit on the aging bridges and tunnels across Italy, adding that the Civil Protection Emergency Fund will be used to restore the road system in Genoa.

© REUTERS / Stringer
WATCH Aftermath of Genoa Bridge Collapse Captured From a Bird's Eye View
The Morandi Bridge in Genoa collapsed on Tuesday, burying dozens of people and cars. According to Italian police, 38 people died and at least 7 sustained serious injuries due to the incident. Over 200 emergency service workers conducted rescue operations at the site.

The bridge was constructed in the 1960s, and, according to a two-year-old document leaked by the unofficial Wikileaks Italy Twitter account, needed massive repairs. However, the authenticity of the paper has yet to be confirmed. At the moment there have been no detailed infromation about the causes of the tragedy.