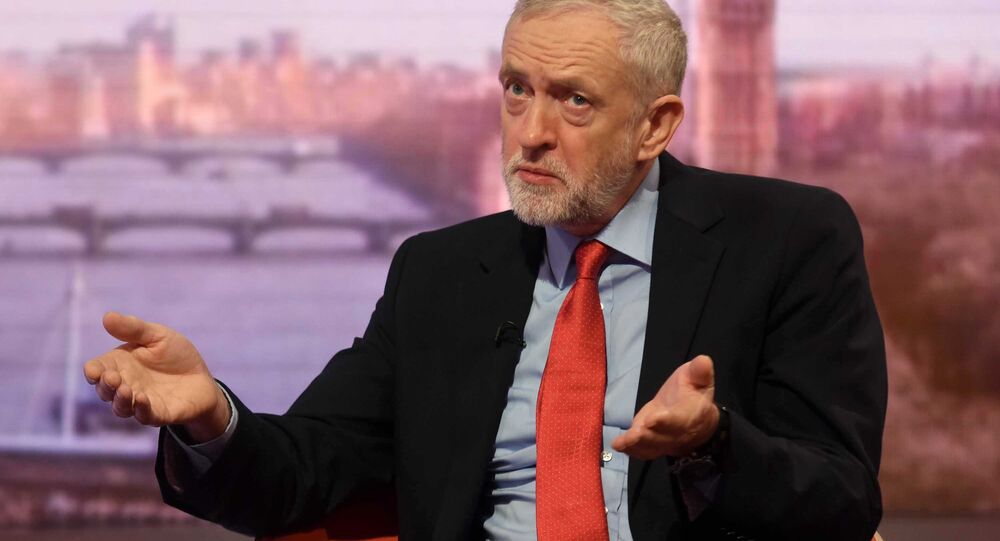 In early August, the UK's Labour Party leader, Jeremy Corbyn, apologized for speaking at a 2010 public event where Israel's actions in Gaza were compared to what Nazi Germany did during World War II.

British Home Secretary Sajid Javid has hinted that it's time for Labour Party leader Jeremy Corbyn to step down due to his controversial stance on anti-Semitism.

"If this was the leader of any other major political party, he or she would be gone by now," Javid wrote in one of his latest tweets, in which he posted a link to a Daily Mail report on Corbyn's visit to a cemetery in Tunisia that contained memorials to terrorists.

The report claimed that the Labour leader had been photographed in 2014 holding a wreath near the graves of members of Black September, the terrorist group that massacred 11 Israeli athletes at the 1972 Olympics.

Corbyn insisted that he was at the service to commemorate 47 Palestinians killed in an Israeli air strike on Palestine Liberation Organization offices in Tunis in 1985.

However, The Daily Mail referred to its own visit to the cemetery during which it was discovered that "the monument to the air strike victims is 15 yards (13 meters) from where Mr. Corbyn is pictured."

Javid's remarks were echoed by Jonathan Goldstein, chair of the Jewish Leadership Council, who told the Jewish News that Corbyn was "not fit to be a member of parliament, let alone a national leader."

"He has spent his entire political career cavorting with conspiracy theorists, terrorists and revolutionaries who seek to undo all the good for which our ancestors have given their lives," Goldstein pointed out.

The remarks came after the Campaign Against Anti-Semitism (CAA) issued a fresh complaint to the Labour Party about its leader's participation in a 2010 event where Israel's policy in Gaza was compared to that of Nazi Germany during the Second World War.

© AP Photo / Alastair Grant
Corbyn's Approval Rating Lowest Since May 2017 - Poll
The Labour Party has struggled with accusations of entrenched anti-Semitism ever since Corbyn took over as party leader in 2015.

In 2016, MP Naz Shah stepped down as an aide to the shadow chancellor over her Facebook post that called for the relocation of Israel to America, but she later said she had been "ignorant."

Also that year, another MP, Ken Livingstone, a former mayor of London, suggested that Adolf Hitler supported Zionism in the 1930s.
In March 2018, Corbyn promised a "zero tolerance" approach to anti-Semitism and vowed to tackle the issue.