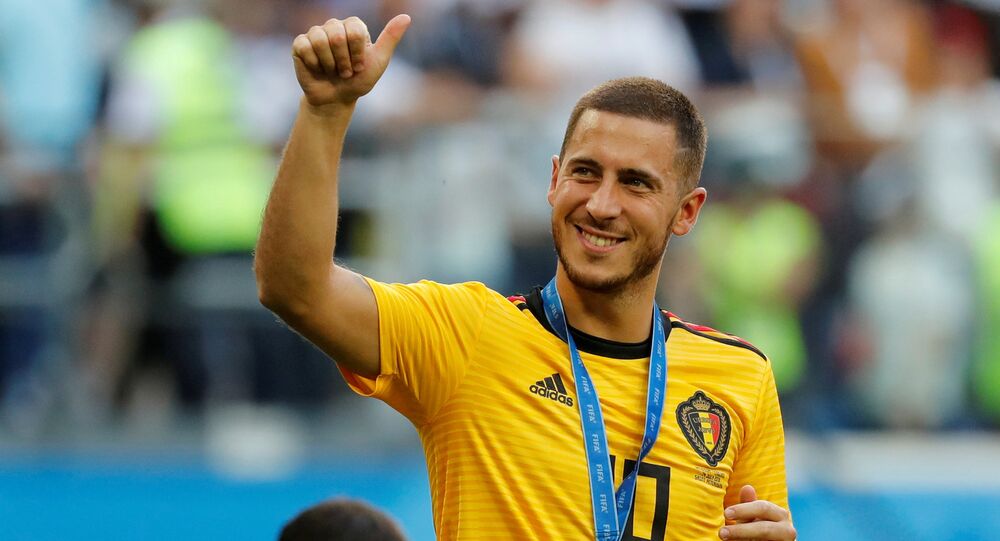 Maurizio Sarri, newly appointed manager for the Chelsea football club, is now waiting for the squad’s top players to return from holiday and show what they are worth on the field.

Chelsea coach Maurizio Sarri has expressed a wish to keep Belgian forward Eden Hazard, who is now on holiday after the World Cup, at the Premier League club, hoping to further “improve him.”

“He is one of the top two or three European players, and I look forward to working with him,” Sarri said earlier this week.

Sarri says Eden Hazard is one of the top two or three European players and he is looking forward to having fun working with him in training and on matchdays. He hopes to improve our Belgian, which he says will be difficult considering he is already at such a high level! #SarriCFC

Sarri, who replaced Antonio Conte as Chelsea’s coach on Saturday and started working with his players at the club’s Cobham training ground this week, also drew parallels between Hazard and Napoli forward Dries Mertens, who has in recent years become one of the Partenopei’s most effective goal scorers under Sarri’s supervision.

"With Mertens it's different. Dries had always been an external striker. Everybody thinks that by necessity he reached a very high level," Sarri said.

"But we are talking about two very high level players. Dries started from lower level. I hope I will improve Hazard too but this is difficult," he added, referring to the incredibly high level that Hazard has reached.

He also said that in the absence of a number of players from the squad, who are currently on holiday, he won’t make any decisions:

"I would like to keep them in my squad," he said, when asked about potential moves with regard to the club's top players.

"A telephone call without looking them in the eyes will not give me any certainty. I would like to meet these players face-to-face and talk to them and understand what will be best for everyone,” Sarri noted, adding that he is equally interested in testing the players’ performance on the field.

READ MORE: Ronaldo Leaves €20,000 in Tips on Vacation in Greece Before Joining Juventus

Hazard has been the subject of media reports and speculations centering around Real Madrid’s alleged interest in taking him to La Liga before next season as a replacement for Cristiano Ronaldo who earlier this month signed to play for Italy’s Juventus. Real Madrid has reportedly offered Chelsea $190 million in compensation for Hazard.

The 27-year-old has been playing for Chelsea FC since 2012. As part of the squad, Hazard has twice won the English championship and grabbed the Premier League title.