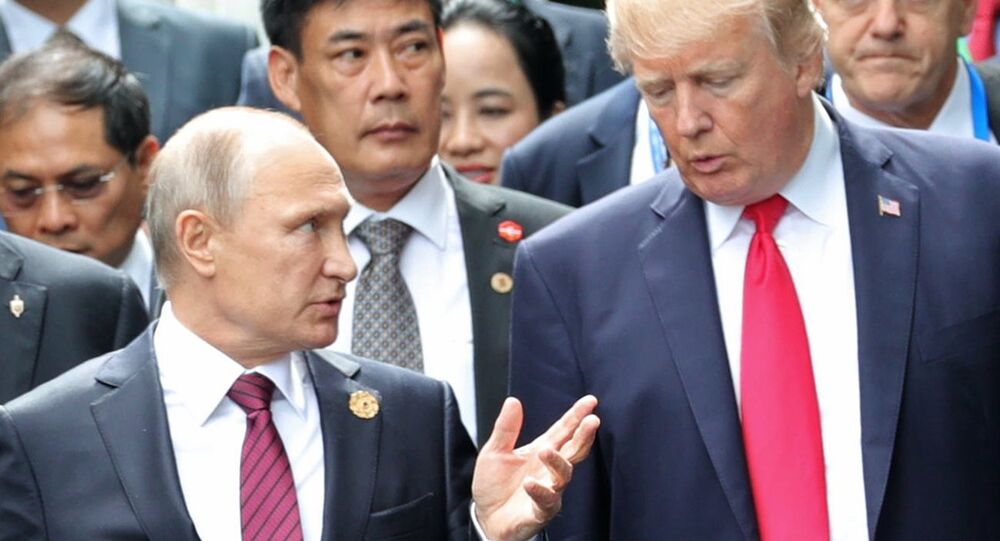 HELSINKI (Sputnik) - The presidents of Russia and the United States will for the first time travel specifically to meet each other tete-a-tete in Finland, arousing hopes for an emerging common ground on a number of issues of global importance, on which the two sides hold opposite opinions.

The Helsinki summit on Monday, July 16, will be the first ever full-fledged meeting between Vladimir Putin and Donald Trump. The two heads of state previously held brief talks twice in 2017, on the sidelines of the G20 and APEC summits.

The range of issues that the United States and Russia need to discuss is so broad that speculations about the possible agenda, which has not been set out or announced officially, have been mentioning everything — from the obvious issue of Russia's alleged meddling in the US election to the less obvious, but no less important energy cooperation.

© Sputnik / Michail Klimentjew
White House Announces Scheduled Time of Putin-Trump Helsinki Press Conference
However, there are some topics that, according to the majority of experts, will be impossible to overlook. One such issue is the situation in Syria. According to Russian presidential aide Yuri Ushakov, it is going to be one of the central topics at Monday's summit. Political normalization, economic recovery of the country, the launch of the constitutional process and return of refugees are the areas where Russia is ready to work together with the United States, Ushakov said.

The second group of topics that is likely to be raised at the meeting relates to nuclear weapons and comprises such issues as the unilateral withdrawal from the Iran nuclear deal by the US, the future of the Intermediate-Range Nuclear Forces Treaty (INF) along with the denuclearization of the Korean Peninsula.

In addition, the parties cannot avoid the matter of Ukraine, Crimea and the US sanctions against Russian companies and officials.

© REUTERS / Steffen Kugler
Trump, Putin Likely to Agree on General Principles in Syria - Trump's Ex-Mideast Adviser
The two countries' energy interests, which may well be of prior importance for Trump given his business record, are also on the talks' agenda. US animosity toward Iran is said to be directly related to oil exports and the attempts to drive Tehran out of the market.

Russia, despite its partnership with Iran, has recently backed an agreement with Saudi Arabia and the oil producers from the Organization of the Petroleum Exporting Countries (OPEC) to increase oil supplies, which left Washington satisfied and Tehran puzzled. At Monday's meeting, Putin may raise the issue of the ways in which Tehran could market its oil in the context of US sanctions.

The summit day will start with a bilateral meeting between Donald Trump and Finnish President Sauli Niinistro.

Around lunch time, Trump and Putin will be officially greeted at the presidential palace, where they will start their face-to-face talks, with only interpreters being present in the room apart from the two heads of government.

© Sputnik / Mikhail Klimentyev
Trump Not Ruling Out He 'Might' Ask Putin to Extradite 12 Russians Indicted in Russia Probe
Later on Monday, Trump and Putin will have a working luncheon, where they will be joined by the members of their delegations, in particular, the foreign ministers.

In the afternoon, the two presidents will give a joint press conference, answering at least two questions each.

Afterward, Putin is going to have a bilateral meeting with president Niinistro, who will also give his closing remarks at the end of the day.

It is still unclear if Trump-Putin agreements are going to take the form of a joint communique.

A number of protests have been planned in Helsinki on the eve and the day of the summit, according to Helsinki Police. However, they are not necessarily related to the personalities of Trump or Putin or to the agenda of the talks.

© Sputnik / Michael Klimentyev
'I Don’t Know Him': Trump Reveals What He Thinks About Putin
The biggest rally, Helsinki Calling, which was expected to attract around 10,000 participants on Sunday and eventually gathered around 2,500, according to police figures, was devoted to defending human rights and the freedom of speech and press.

The Youth of the National Coalition Party marched against Trump's trade policies and Russia's stance on Crimea, while the youth wing of the Finns Party, on the contrary, organized a rally in support of Donald Trump's course, specifically on immigration.

The Finnish efforts to organize the most safe and convenient venue for the summit deserve to be praised separately. Having been informed of a meeting of such magnitude just a few weeks in advance, the local authorities canceled their traditional summer holidays and have done outstanding work in providing security and media facilities.

Some 2,000 journalists from over 60 countries have been accredited and accommodated in hotels without overpricing and any problems. Around the same amount of police officers  as those on regualr duty have been called in as reinforcement. The city is definitely taking advantage of the summit in terms of country branding, as the media center is offering Finnish food specialties, a shipping container converted into a sauna and a special lounge to watch the FIFA World Cup Final on Sunday.

© AFP 2021 / SAUL LOEB
Secretary of State Pompeo on US-Russia Relations Improvement Issue: 'Ball in Russia's Court'
This is not the first time that the Finnish capital is hosting a meeting of historical importance. The most famous diplomatic breakthrough took place here in 1975, when the United States, the Soviet Union and 33 other countries worked out the Helsinki Final Act, which laid ground for the Organization for Security and Cooperation in Europe (OSCE), improved relations between the West and the Communist bloc and prevented the Cold War from becoming hot.

Moreover, George H.W. Bush and Mikhail Gorbachev met here in September 1990 to discuss then Iraqi President Saddam Hussein's aggression in the Persian Gulf, while Bill Clinton and Boris Yeltsin enjoyed the cooperative air of this city in March 1997 addressing the issues of arms control and NATO enlargement.

Hopefully, the spirit of Helsinki will help the Russian and US presidents to start healing breaches in relations that are currently at their lowest point in decades.