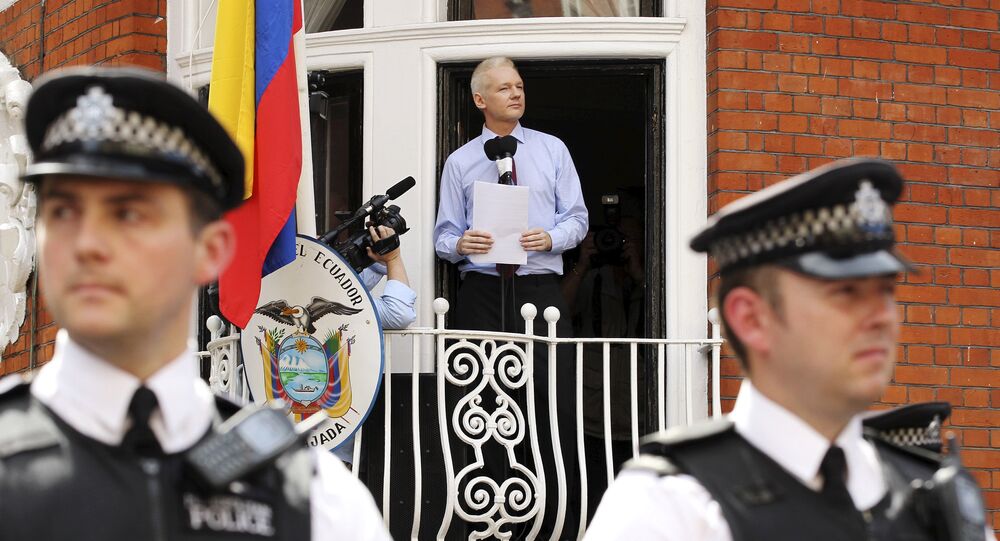 "Ecuador has been looking for a solution to this problem," Valencia said in a televised comment. "The refuge is not forever, you cannot expect it to last for years without us reviewing this situation, including because this violates the rights of the refugee."

Assange has been living at the Ecuadorean Embassy in London since 2012 when he skipped UK bail on sexual assault charges over fears this was a ruse to hand him over to the United States.

© AP Photo / Matt Dunham
WikiLeaks’ Assange Forced to Choose Between Asylum and Health - Lawyer
Assange’s communications with the outside world were cut off in March after the country accused the Iraq war whistleblower of putting its good ties with London at risk. Ecuadorian President Lenin Moreno later ordered to remove extra security at the diplomatic mission.

Journalist Julian Paul Assange gained fame in 2006 while working on the WikiLeaks website, established for publishing classified documents. In 2010, the website posted a classified video released by US service personnel and showing a 2007 US helicopter attack that killed at least 18 civilians in Baghdad. That same year, the website also started publishing 250,000 US diplomatic documents.

According to the UK-based media reports, Ecuador spent nearly $5 million on a spy operation to support and protect Assange in its embassy in London. Millions were allegedly put into a secret intelligence operation, dubbed "Operation Guest," and employing undercover agents to monitor Assange's visitors, embassy employees and the UK police.

Why I Stand With Julian Assange

WikiLeaks’ Assange Forced to Choose Between Asylum and Health - Lawyer