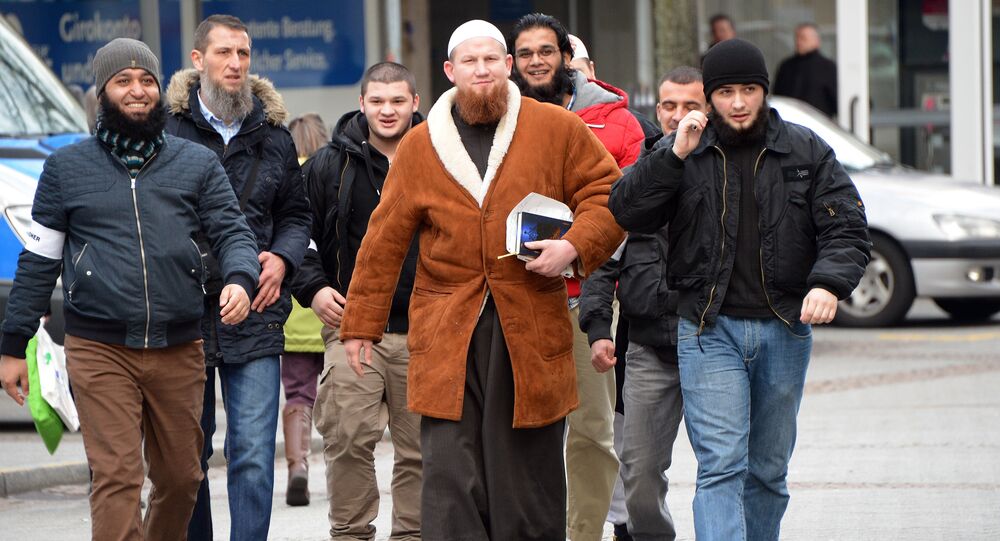 Information about the failed deportation of Islamists has sparked backlash among German politicians with some calling not to leave people in the country who pose a huge danger to society.

Germany has failed to deport over a dozen of dangerous Islamists to their home countries, German Das Bild newspaper wrote on Wednesday.

According to the media outlet, one of the Islamists is a Jordanian-born migrant, who planned to carry out at least three terrorist attacks in Dusseldorf as well as an attack on the Jewish cultural center in Berlin.

The German criminal department intercepted a telephone conversation in which the 52-year-old man talked about his plans.

He was subsequently sentenced to 6 years in jail, served his term and now must be constantly observed by the police.

© AP Photo / Markus Schreiber
Germany's Salafist Surge: Islamists Double in Six Years to Reach 10,000 Followers
The newspaper noted that he cannot be sent to Jordan because he is in danger of being tortured. In addition, his home country has not yet provided the documents necessary for deportation.

The authorities of the federal state of North Rhine-Westphalia alone cannot deport 16 potential terrorists to their homelands.

In the light of the published information, a number of German politicians have demanded more decisive action from the German government with regard to potentially dangerous individuals.

"An abstract threat of torture is not enough" to deny the deportation of Islamists, deputy chairman of the Free Democratic Party, Wolfgang Kubikki said.

In his opinion, more specific information is needed as a proof that an individual will face cruel treatment in his home country upon return.

"Otherwise, there is no reason to leave people in the country who pose a huge danger to society," he said.

READ MORE: Historian: Difficulty Is to Make Distinction Between Islamists and Muslims

Earlier, it was reported that BAMF had initiated a revocation proceeding against the former bodyguard of Osama bin Laden upon request of German Interior Minister Horst Seehofer.

The 41-year-old Tunisian man, who currently resides in Germany, is believed to pose a considerable threat to the country's security. But due to the alleged threat of torture in his home country, he hasn't been able to be deported from Germany for years.