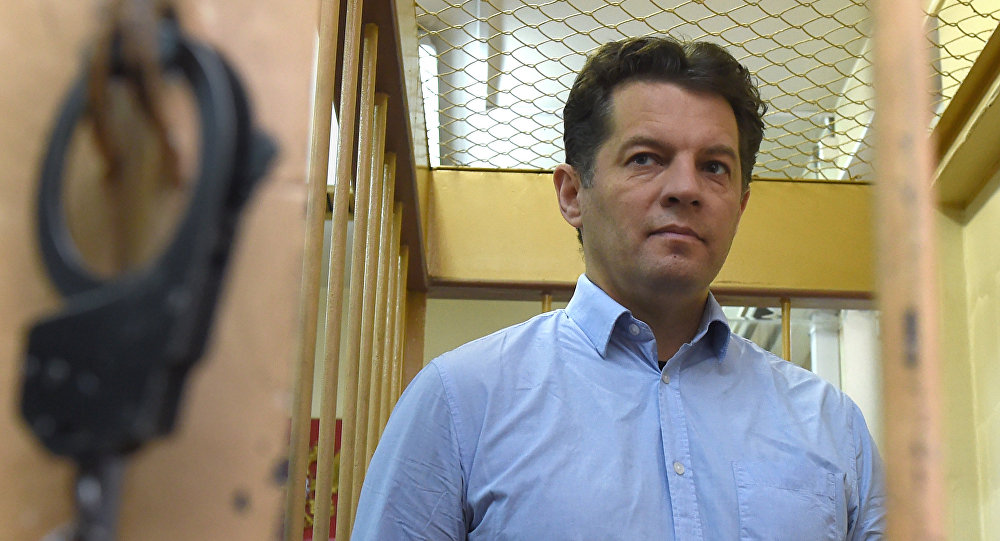 Earlier in the day, Moscow city court sentenced Ukrainian citizen Roman Suschenko, whom the Russian Federal Security Service (FSB) believes to be a Ukrainian intelligence service officer, to 12 years in prison over espionage.

"To find Suschenko guilty [of espionage] and sentence him to 12 years in prison," the judge said.

© Sputnik / Vladimir Trefilov
Criminal Case Opened in Ukraine After Vyshinsky’s Apartment Robbery – Lawyer
According to the FSB, Suschenko was collecting confidential information about the work of the Russian Armed Forces and National Guard. The Ukrainian Ukrinfom news agency claims that he had been working as its correspondent since 2002. The media outlet rejected accusations of espionage, saying that Suschenko was on vacation and visited Moscow on personal business.

Court hearings on the case were held in closed sessions.

Addressing the issue, Vyshinsky's lawyer Andriy Domansky told Sputnik, that he the defense is ready to take part in talks on Vyshinsky's exchange for Sushchenko or another citizen of Ukraine if invited to participate.

"Politicians and diplomats should think about this [exchange]. As for legal experts, the lawyer, first of all, works to defend Vyshinsky's interests. I, as his lawyer, will represent and protect his rights and interests in court, defend his innocence," Domansky said by phone.

On May 15, the Ukrainian Security Service (SBU) broke into the office of RIA Novosti Ukraine in Kiev. Vyshinsky was detained on charges of treason that same day. The SBU has also accused him of supporting the self-proclaimed people's republics of Donetsk and Luhansk in Ukraine's southeast. On May 17, the Kherson City Court decided to place Vyshinsky in pre-trial detention for 60 days without bail.